Make a Sound for Unheard Voice

Make a Sound for Unheard Voice

We would like to start with a quote from Seth Godin

“The way to work with a bully is to take the ball and go home; first time, every time. When there’s no ball, there’s no game. Bullies hate that. So they’ll either behave so they can play with you or they’ll go bully someone else.” The quote is what the blog is about.

As post Graduate students studying at Victoria University, we are fortunate enough to work with influential mentors. One of them is our lecturer, Tony de Thomasis, who made us write this blog as part of our course assessment, and we must say that  this is a challenging experience for us, because it is our first ever blog on any forum.

According to Vishal Sikka “the only limitation is our imagination”. We were introduced to the SAP Lumira tool in our ERP application class (BCO6181).  We decided to analyse a data set on SAP LUMIRA about the victims, causes and reasons behind Bullying. In our society, from school to work there are unheard voices looking for their justice. Moreover, there is a loop hole in our legislation about the justice. If you are being bullied or know or see someone being bullied, it is important that you read this fact sheet to find out how to be a supportive bystander. A bystander is someone who sees or knows about bullying or other forms of violence that is happening to someone else.

Just as we have human rights we also have responsibilities to respect and protect the rights of others. A supportive bystander will use words and/or actions that can help someone who is being bullied.

If bystanders are confident to take safe and effective action to support victims then there is a greater possibility that bullying can stop and the person who is bullied can recover.

People respect those that stand up for others who are bullied but being a supportive bystander can be tough. Sometimes it is not easy to work out how to help safely because bullying happens in different ways and places such as online, at work or school.

From over the last 10 years, Cyber Bullying spread like a disease and caused more harm than ever before.  Because of electronic mediums it spreads like a virus and can have devastating effects in shape of trauma, mental illness or the extreme of the victim taking their own life. Cyber related bullying  is among the most common form of homicides in teenagers, where the victim kills the culprit and than takes their own life. It’s an alarming sign for schools all over the world. Victims lose faith in school system where culprits avoid severe consequences. 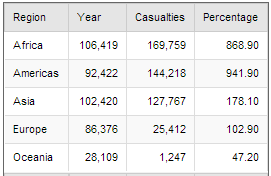 Visualization 1,  exhibits the homicide regions geographically from year 2004 to 2010.  The major victimization took place in African and South American regions. In Visualization 2, Oceania or Asia Pacific regions has the minimum causalities. 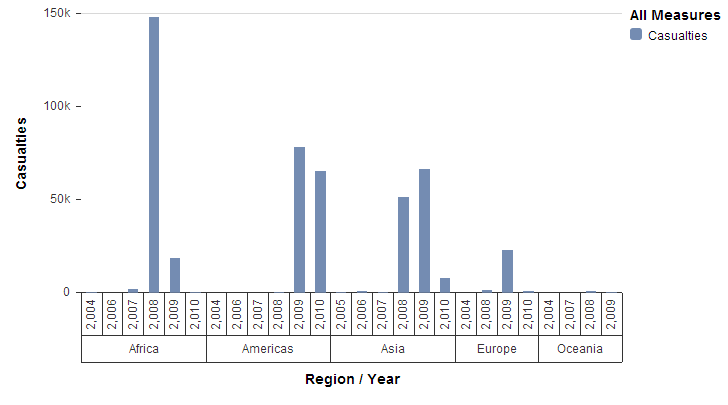 This shows the  number of causalities  in all five regions from year 2004 to 2010, Moreover, Africa has the most number of homicides victims from  bullying in year 2008 with around 140000. America and Asia are the second most with regards to casualties between the years 2008 to 2010. Furthermore, it is also clear in the visualization 4 that the recent activities of homicides through bullying were at a peak during the years 2008 to 2010.

Thus, we can conclude that every day in this world heart breaking and traumatic incidents happen.  We humans need to raise a voice for the injustice and be a voice forthe thousands of unheard people. Stand by with those hundreds of victims which we ignore in our everyday life, so we can eliminate immoral action from the society. Governments and councils at every level need to address these concerns for the betterment of humanity and the generations to come.

Special Thanks to our Guest speakers;

Keep making it better – Join us in Walldorf and learn how to!

Cyberbullying – It Isn’t Just For Kids

Outstanding use of SAP technology.  Heartbreaking yet inspiring with the call-to-action about what people can do.

I'm curious how you studied the links between homicide and anti-bullying and wonder how easy it is to tease out the two. In some respects, homicide could be seen as the ultimate form of bullying in general, so each homicide would be an instance of 'bullying.'

There's nothing like a visual to drive the point home and you've done a very good job applying Lumira to an underserved task and underserved voices.

Please keep us in touch with your work.

Thanks for your appreciation Moya,

I was amazed how SAP Lumira helped me predict detailed analysis, which I could not  find using spread sheets, I would recommend that any body who is looking to find a unusual connection with their data, or wish to make some bold specific predictions to use SAP Lumira.

The inspiration provided to analyse our data was provided by Marilyn Pratt and her SAP mentor Buddies during their visit to BCO6181.

Thank you for a great blog and using visualizations to tell an important story.  It is great to hear that Marilyn and others inspired you.

I look forward to seeing more contributions from you.

I really appreciate for your kind comments , looking forward to come up with more contributions.