The motivation behind our project was the desire to truly challenge ourselves. We didn’t want to just showcase an idea, but rather fully implement the necessary infrastructure in its entirety.

We knew that doing this within three days constituted as pushing the envelope, but most of us just wanted to see if it could be done.

About a year and a half ago I happened to watch a TED presentation by a very talented PhD student called Lior Zoref, who wished to showcase the Wisdom of the Crowds, and more specifically its utilization as a methodology for making accurate estimations. He recreated an experiment originally observed by Sir Francis Galton, by bringing a live ox onto the stage and asking everybody to individually estimate its weight.

While none of the five hundred participants successfully estimated the weight of the ox, with guesses ranging between the mere hundreds and up to the thousands of pounds, the mean of all estimations was in fact only 0.0016% off of the true weight of the ox.

Needless to say this left an impact on me, and after presenting this to my initial InnoJam partner, Barak Kinarti, it seemed that he too saw the potential immediately. Furthermore, within a few discussions we decided that we should create a platform that would allow participants to utilize the methodology and harness the power of the wisdom of the crowds in order to make better educated decisions within short 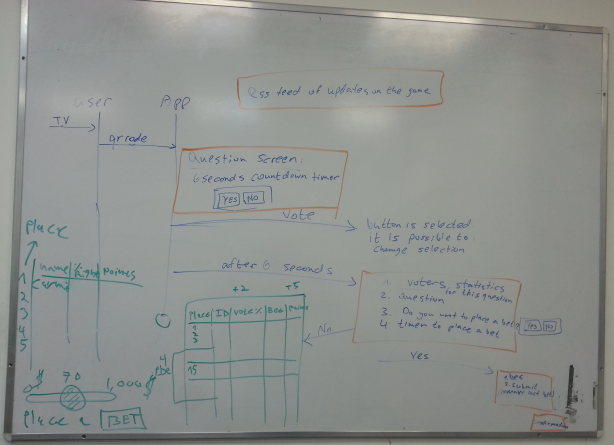 We saw a variety of different use cases for such a platform, including live polling of participants in live events in order to gain a better perspective of opinions, however we wished to apply the methodology to a more exciting and visually stimulating field without sacrificing the potential profitability of our product.

In a moment of reflection, I recalled a brief conversation with an acquaintance who explained a new field in the legal gambling industry called “Micro gambling”, which consisted of placing bets on short term questions regarding sporting events.

Matching the thrill and visual appeal of sporting events with the profitability of the legal gambling industry and with crowd sourcing as a service sounded like fun to both Barak and I. Furthermore, it was an easy idea to pitch, which allowed us to gather our entire team of extremely talented developers within a single day.

In our first Jam meeting we formulated a business model. We would focus on sporting events upon which legal gambling agencies are taking micro-bets, and by conducting polls in order to gather specific estimates from millions of participants simultaneously, we would use the wisdom of the crowds as a form of predictive analysis provided as a service to the same gambling participants who were polled, right before they are faced with their decision whether or not to bet, and what bet to place.

It is at that moment that Ran Gross, a talented architect who served as an early stage advisor, suggested that we name the product “Show me the Money”, which is essentially the service we wished to provide.

While our user base would consist of gambling participants, they would in fact not be our clients. The polling, analysis and data presentation would be entirely free of charge. Moreover, Our customers would be the gambling agencies themselves who would pay in order for us to route our users’ traffic, whenever they’d wish to act upon the information we provided, and place real bets. 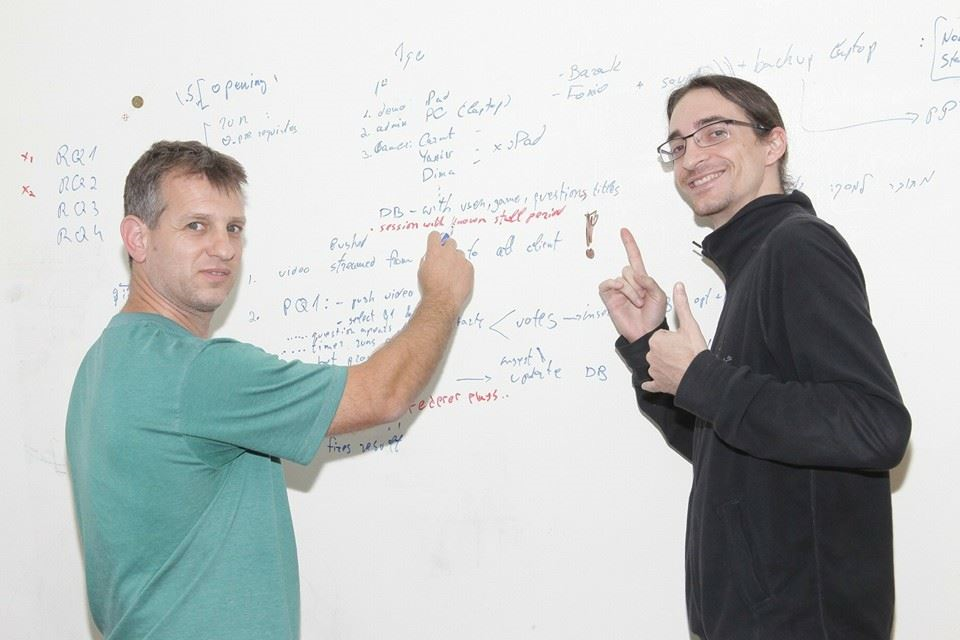 The next step was determining the scenario and environment. The entire team unanimously agreed that it should be a mobile application that would also be streaming the sporting event thus eliminating any need for proximity or dependence on other technologies, and providing gambling participants with a one-stop-shop experience. 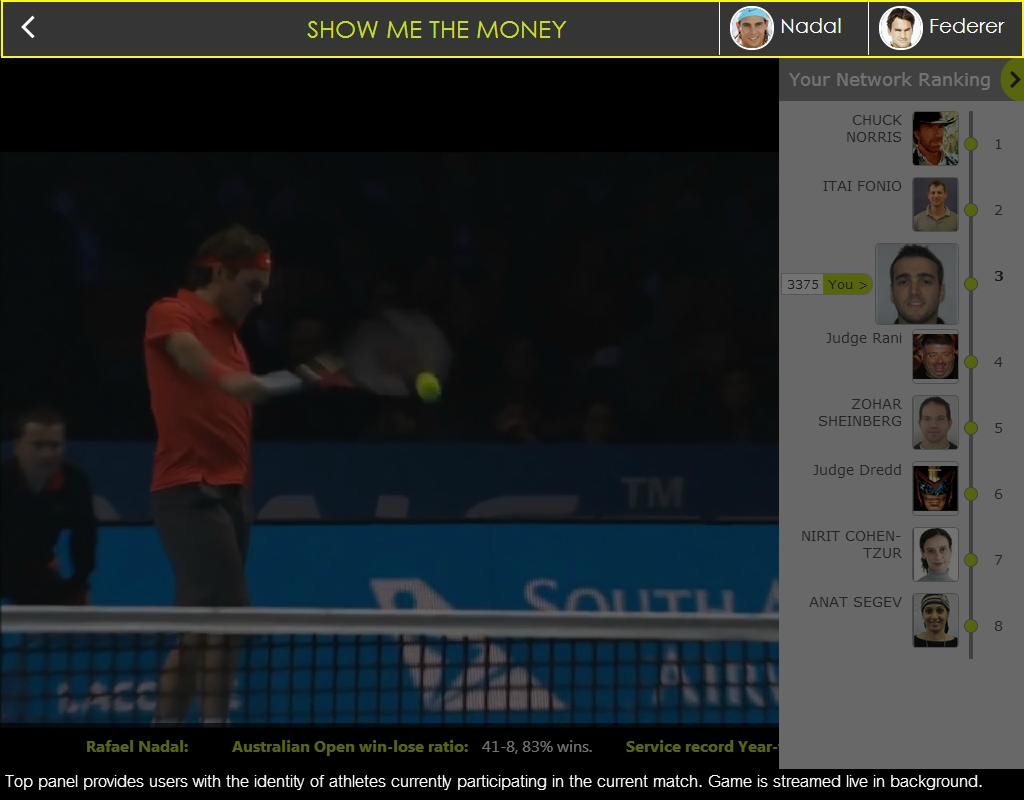 The flow: Prior to a specific play, all users would simultaneously be presented with a question and then be allowed to estimate the outcome of the specific play. 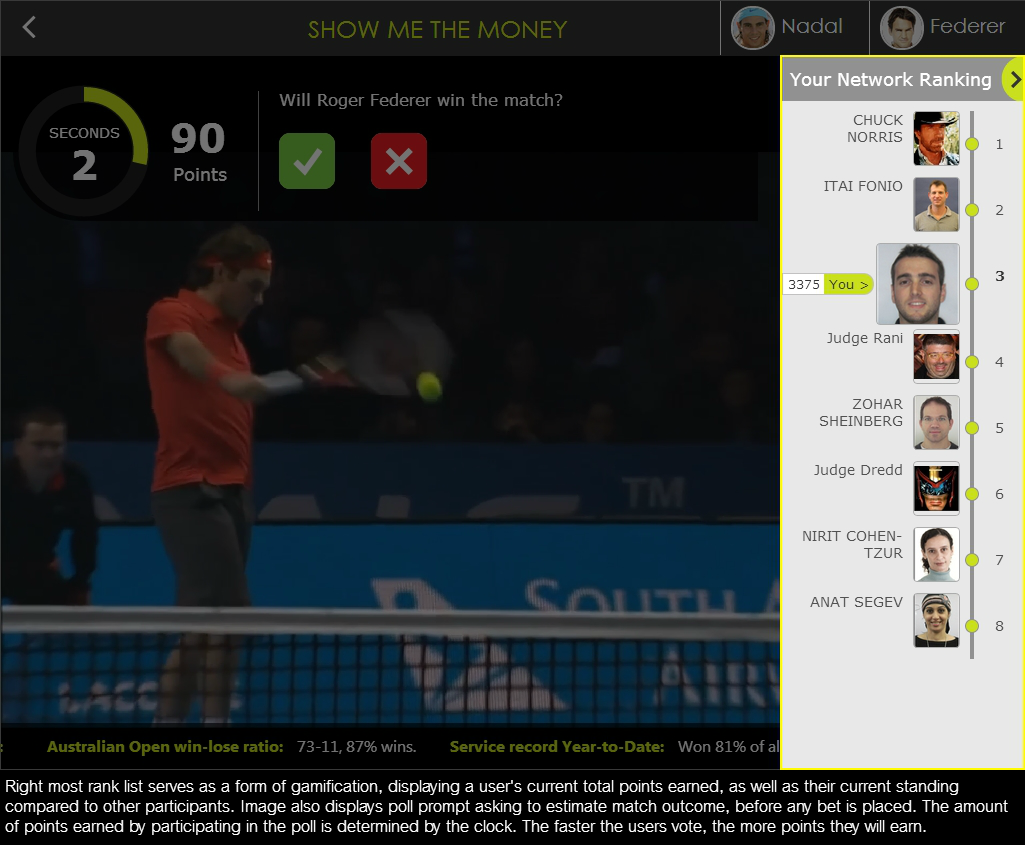 Furthermore, all user estimations would be aggregated within our database in real time, the mean would be calculated and pushed back to all users with an informative display of voting segmentation. 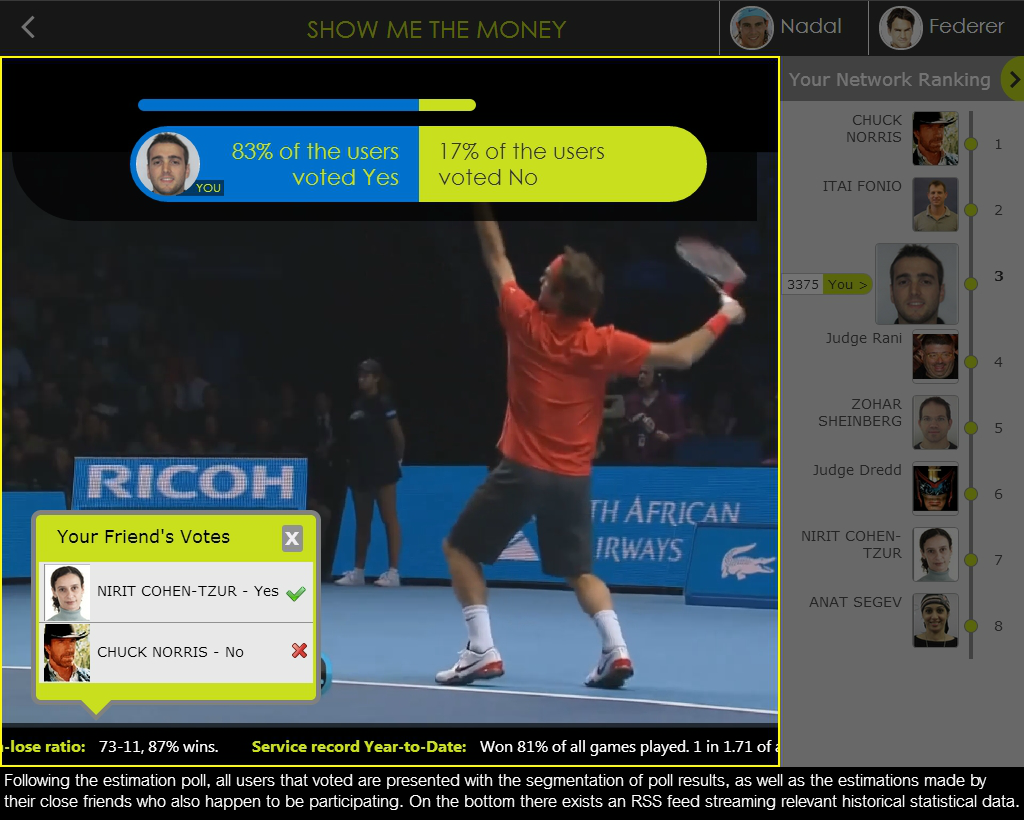 Next, users would simultaneously be asked whether or not they wished to place bets. If they affirm that this is indeed their desire, users would be prompted with a friendly interface that allowed placing the bet, determining the amount while still displaying the poll results. 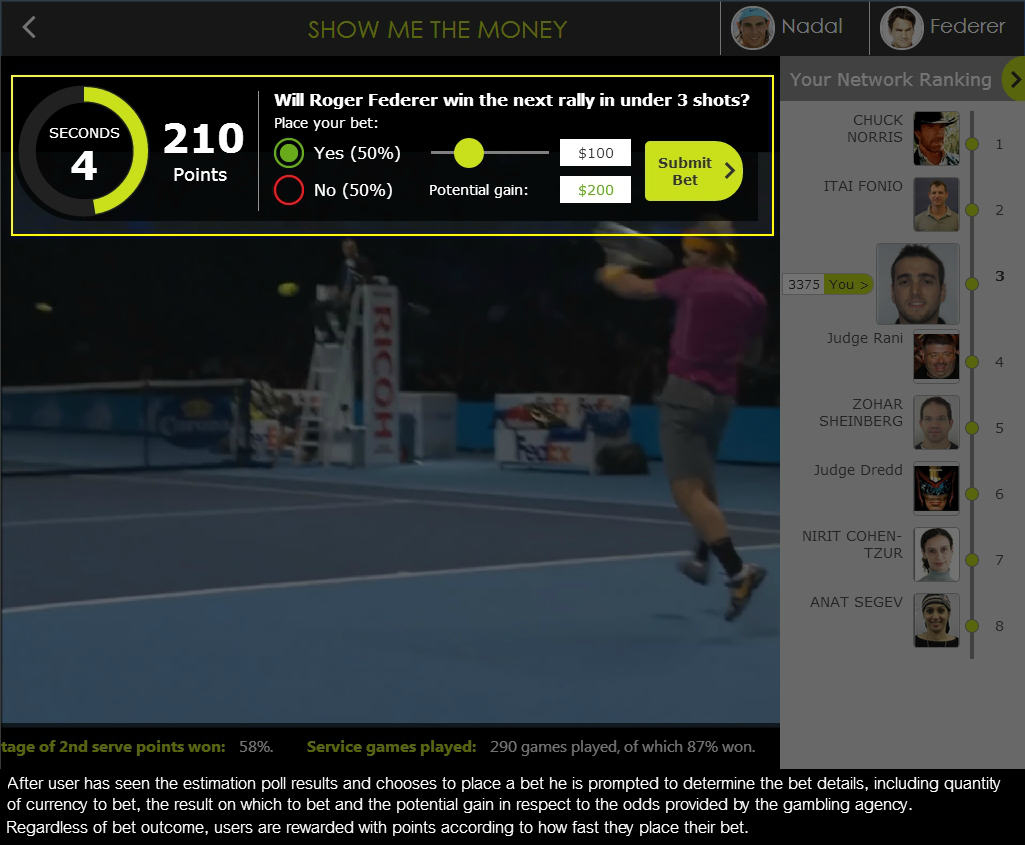 Upon placing the bet, it would be routed to the gambling agency for processing and the user would proceed to watch the play unfold.

This flow immediately shed light on several of the technological challenges we faced, including synchronization of all connected devices in order to assure that all users shared the exact same experience simultaneously, the streaming of high definition video content as the center piece of our application without sacrificing responsiveness and performance in general, the implementation of a coherent and intuitive user interface, the application of social connectivity and gamification in order to assure consistent and recurring participation of users.

Considering the amount of users we were targeting, we knew that we had to utilize a fast database and server combination and this is where HANA stepped in to accommodate our needs. Additionally, we chose to utilize both node.js and nginx servers simultaneously to manage traffic over open web sockets. This allowed us to progress fast, learn how to work with web servers that we were previously unfamiliar with, while enjoying the connectivity and speed required in order to deliver the level of responsiveness we were seeking.

Our team was highly diverse and consisted of extremely talented colleagues with a vast array of specialties including client side, user interfaces, server side, databases, performance engineering, UX and graphics. This in turn allowed us to transfer knowledge and learn from each other while assuring the highest quality in each field. 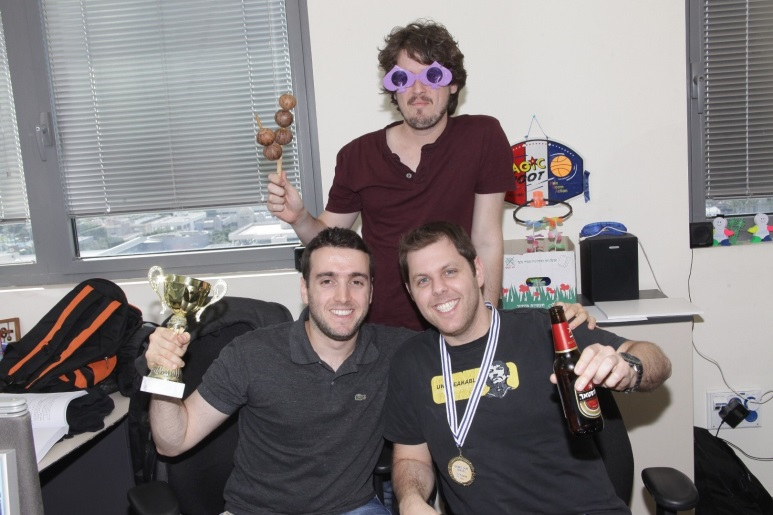 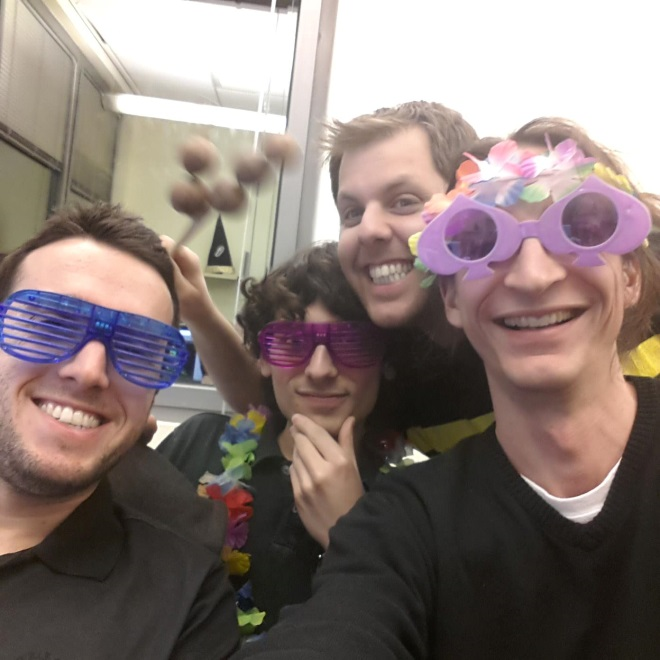 Stating the development process was a roller coaster ride would be an understatement. The majority of team members pulled entire nights, and we still found ourselves minutes away from the semi-final demo we were expected to deliver, still standing around Yaniv Carmel who was feverously debugging a critical show stopper. 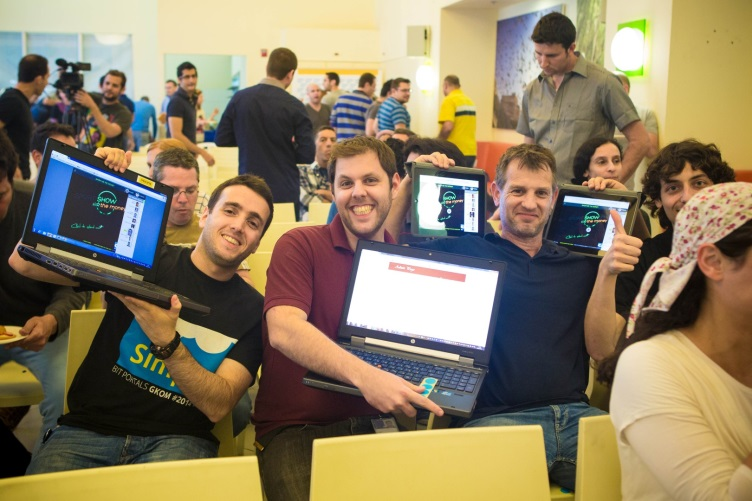 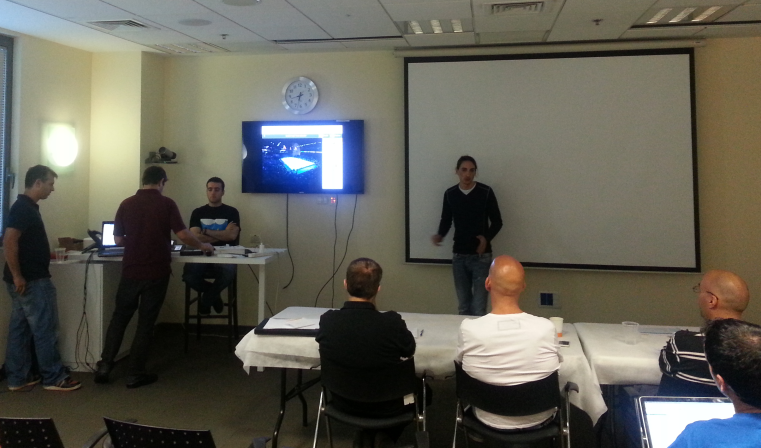 We spent the entire final night preparing the product and then the presentation itself, which in itself was not as simple as we thought it would be considering the amount of features implemented and the very limited amount of time, however we progressed through the semi-finals and received a very positive reaction. 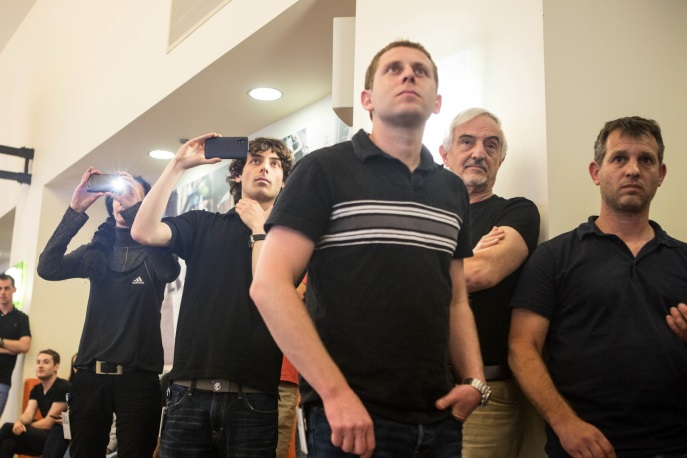 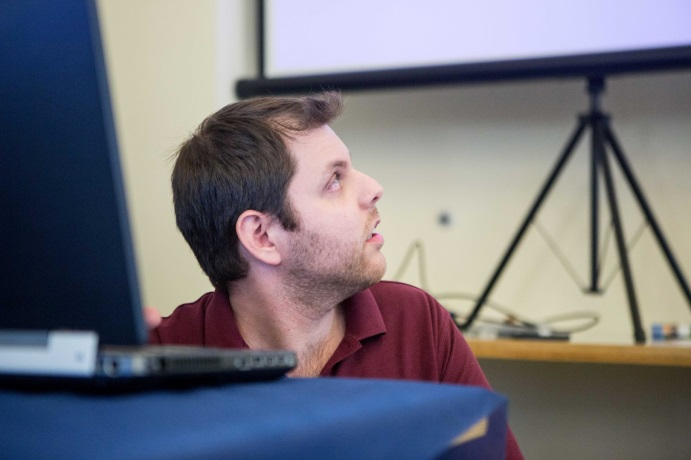 After finishing our final presentation and even before hearing the results, the team members already shared a unique vibe and state of mind, feeling that when taking into account that we had accomplished that which we set out to do within only three days and nights, we’d already won regardless of what the results might be. However, this could be attributed to sleep deprivation and vast quantities of sugar 😉 . 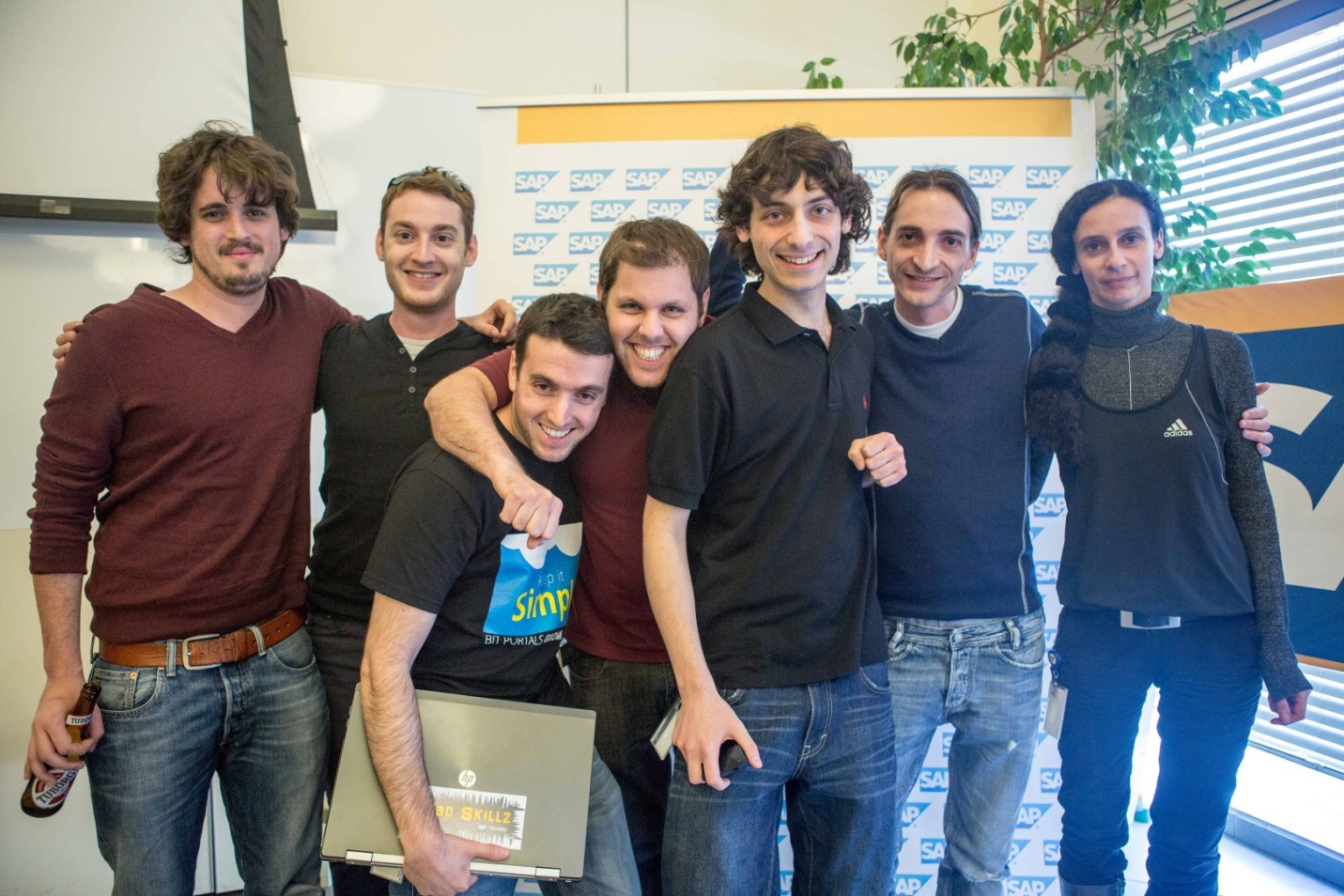 A special thanks to Yotam Shapira and Adi Eshet for organizing such a fun and educational event.

And of course, thanks to everybody who took an active part in this project: