“Build Your Own Fiori App”; Co-Innovation Lab is on Fire

It really happened!  Co Innovation at its best! We were having the first workshop in the Palo Alto Co-Innovation Lab (COIL) – “Build Your Own Fiori App.”

Colleagues from the SAP UX GTM, the E&C Solution Center and the COIL team joined and collaborated with four of SAP’s PartnerEdge partners. The objective was to design and develop partner-owned apps from scratch, based on use cases that provide incremental value to businesses, following SAP’s Fiori design guidelines. The partners brought the use cases and initial ideas, and committed to resources and completion of the apps. The SAP team supported with expert guidance and enablement, as well as system infrastructure.

For the design segment, the partners invited their customers’ end users and we ran a two-day Design Thinking workshop. We started
by understanding the end user, the issues in today’s process, the pain points and the objectives. We continued through the ideation and validation phases and ended with the creation of storyboards and high-fidelity wireframes.

Joining one of the teams was a treat for me. The team composed of 2 end users, 2 developers and 1 UX designer. I felt like I was in the shoes of the end user, a ski instructor, and I could really understand what he or she was going through once they need to complete the process discussed. The discussion was interactive, productive and actually fun. We were building on each other’s ideas. Once we were done with creating the Persona, understanding the user’s Point of View, building the Journey Map and noting his frustration points – the ideation session was exciting as well as the storyboard building. 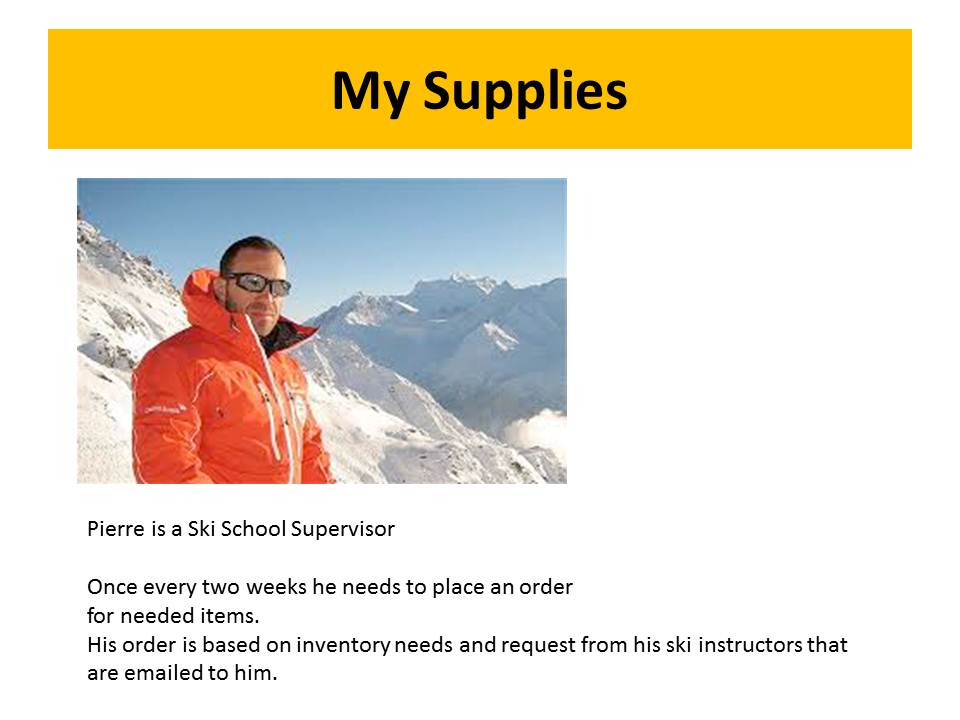 Sharing our ideas and outcomes with the rest of the team was an important and an inspiring part. In addition, we got feedback from additional end users during the validation session. The end users found it easy to relate to what we did with the simple and coherent storyboard. The feedback we received was productive and we went back to our storyboard and updated it accordingly.

When we gathered the next morning each team shared their journey map and storyboard. After reviewing Fiori design controls, each team started working on the app wireframes, following the SAP design guidelines, using the Prototyping Kit https://experience.sap.com/fiori-guidelines. Towards the end of the day, we held another round of team debriefing – tweaking the designs a bit. After the “I wish”, “I like” input from the participants, plus handshakes and goodbyes, the customers were headed home while the partners’ developers stayed for another 3 days of app development.

The following morning, and for the rest of the week, SAP Fiori consultants, OData experts and UI5 developers replaced the UX designers as trainers. Partners’ developers started constructing the app according to the wireframes, commencing with the UI. The normal or default flow usually starts with the backend, identifying relevant BAPIs and then creating OData services. We decided to start with the UI.

On Friday morning, after only two days of development, the teams presented their work. What they were able to accomplish in these two days was amazing – several screens with functioning controls and backend connectivity, all according to the wireframes created at the beginning of the week. Very impressive! 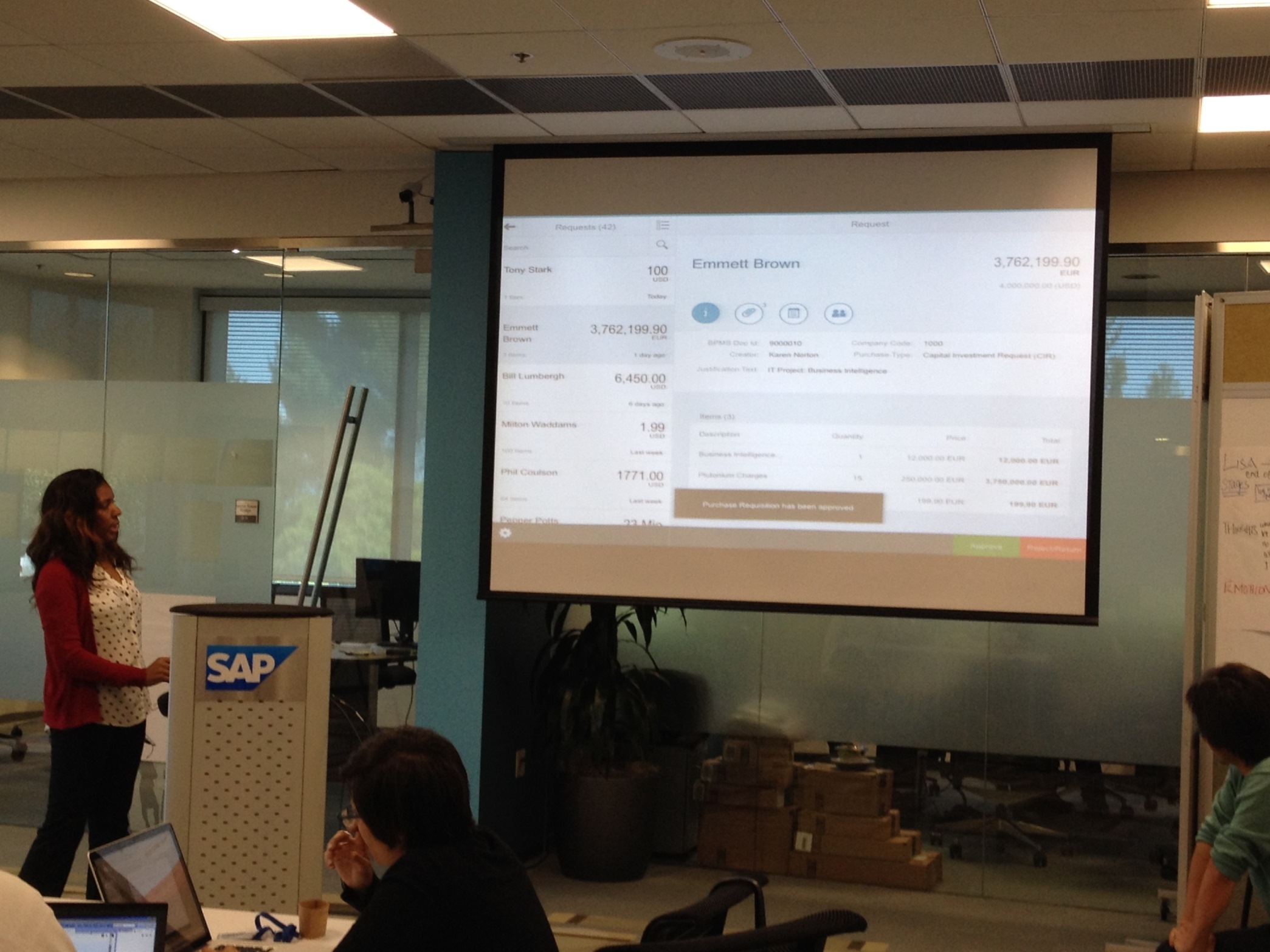 True, the journey had just started and there are several more steps before the app is ready for certification, which will be sponsored by SAP. However, having high-fidelity functioning mockups for end users to review after five days of work is definitely a nice achievement.

The collaboration between the UX GTM team, the E&C Solution Center and the COIL was a great experience. Further support will be
given to the partners during the development phase as well as once the app is completed and certified. The SAP teams will support mutual go-to-market
activities like public relations, app showcasing during SAP events and more.

What made my week was the customers’ feedback concerning the workshop – they appreciated the ease of defining a new Fiori app based on real end users’ requirements, the simplification of processes and the implementation of a beautiful UI. “I found it to be an excellent experience overall, the opportunity of walking through the various steps leading to the UI mockup with the SAP UX experts and the other participants.  Discussing the problem statement…we learned to prioritize and focus on the MVP concept, central to the Fiori principals…It was gratifying to see the “design thinking” coming to fruition…”

I can’t wait for the next workshop!

Sharon - it was nice meeting you at the session last week in Palo Alto!

Thank you Sharon, well done. Your strong commitment, restless dedication, and extraordinary efforts made this co-innovatoin event successful. Thanks also to the  participating partners and their customers, and all SAP colleagues who supported this event. It was excellent collaboration. I am looking forward to the next event of this kind and encourage our colleagues, globally in other regions and countries to consider this co-innovation approach and host similar events in collaboration with Sharon & team.

Hope we could see more and more co-innovation between SAP, partners and most importantly our customers. Design thinking is really cool in achieving best user experiences.

You couldn't phrase it better!

I would love to run a workshop like that in APJ. On top of "just" the development of new Fiori like apps, we can deep dive into "how to mobileze Fiori", "How to use the Web Application Tool Kit", "how to integrate with SAP Gateway for Microsoft", "How to integrate with the Fiori Launchpad" etc.

Hi Sharon, I know you were planning one more chapter of this journey - integration of Fiori workflows in Microsoft Outlook leveraging SAP Gateway for Microsoft: SAP Microsoft Interoperability.  While this plan did not materialize this time due to participant's sickness, we were grateful for an opportunity to present to the partner/customer/consulting audience the concept and the demos of SAP Gateway for Microsoft based implementations with Outlook and Excel.  Looking forward to the next workshop where exposing Fiori processes in Microsoft applications would be a part of the agenda.

Hi Sharon, thanks for sharing your experience with the community. Your story again shows the potential of design thinking and what great value a good lies within this approach. Can't wait for myself to participate in such an event over here in Germany.

thanks. stay tuned as we will run further workshops like that in EMEA