A Time for Founders

It hardly seems like a big headline when a company announces a new award program for its employees. To save you the suspense, that’s exactly what we just did at SAP with the Hasso Plattner Founders’ Award. But there’s something behind this award that I personally believe is very special and unique. 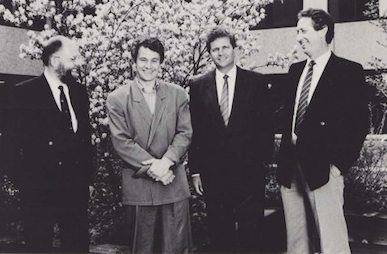 Few companies can lay claim to being the originator of an entire industry. Thanks to Hasso Plattner, Dietmarr Hopp, Klaus Tschira, Claus Wellenreuther and Hans-Werner Hector, SAP is one of the exceptions. Four decades ago this team of five engineers had the courage to do something bold. They believed so strongly in an idea that they left secure careers to bring their experiment to life. It was the ultimate act of innovation, a belief that there was a better way for businesses to run and the guts to go for it. Look what they created – not just a thriving company in SAP, but an entire industry rallying around the purpose they first saw. Those of us who have the privilege of carrying the SAP logo on our business cards stand on the shoulders of these giants.

My pride in SAP’s heritage aside, there’s more to this story.

Today every CEO I speak with is hungry for new ideas. They recognize that in this era of disruption, business model innovation requires an openness to new thinking from anywhere. SAP in many ways proves the point – 80% of our net-new revenues come from businesses we were not in 2009. Likewise, businesses in all industries will soon find themselves growing in ways they probably hadn’t conceived of only a few short years before. This challenge goes far beyond the boardroom. Winning companies are actually empowering their own customers and employees to help architect their future.

Just recently Hasso Plattner himself reminded everyone at SAP that we all face the innovator’s dilemma. Citing Clayton Christensen’s brilliant work, Hasso made one thing clear above all else: if we stop innovating, we’ll lose. The battle is in the will to be restless – to never stop looking around corners for the big idea that isn’t quite ripe. No corporate policies can make this happen, but they can certainly impede it from happening.

Here’s where CEOs have to play a significant role. Building a culture that promotes innovation is fundamentally about demonstrating that actions live up to words. It’s one thing to say that failure is OK. It’s another thing altogether to reward people who have the guts to try something big that ultimately fails. It’s true that the 21st century workplace is more open, giving individuals and teams some runway to dream, ideate and innovate. But most businesses are still highly complex with way too many layers between employees, their customers and their leaders – thereby limiting the possibility that most experiments will ever be noticed or nurtured. So the role I see the great CEOs playing is less about what they say and more about what they show by example.

So back to our new award – we’re offering it because we want every one of our 67,000 employees to be on notice: the courage and boldness it took to start our company is exactly what we need to keep growing it. We need ideas – bold ideas. We need people to have the entrepreneurial spirit to take our focus on simplifying everything and make it their own personal mission. What can they do that really moves us forward to the ultimate benefit of our customers?

In return for the leadership that our colleagues show, we’ll take the momentous step of honoring them alongside the giants who built us.

This is a moment for everyone to think and act like a founder – courageous, innovative, entrepreneurial. You’ll be able to tell a lot about the future of SAP by the number of compelling candidates we’ll have to consider. Knowing what I know about my colleagues, I predict a really difficult decision lies ahead.