SAP’s strategy for the planning domain within Enterprise Performance Management is clear – SAP Business Planning Consolidation (BPC) is the tool to use for SAP customers. SAP has decided to combine the best of both of its planning tools (Integrated Planning (IP) and BPC) in one tool being BPC Unified. So should all customers already opt for BPC unified? In this article we will try to shine some light on this question.

The answer to that question is unfortunately not that straight forward – based on our experience with SAP’s planning tools, SAP is still on a journey. BPC NetWeaver 10.0 underwent a serious redesign. Since Q2 2013 SAP is busy integrating the best functionalities of Integrated Planning and BPC NetWeaver in the new BPC 10.1 release, which is currently in ramp-up phase.

Why come up with BPC Unified?
Classic BPC is mainly designed to support the financial planning and consolidation process which has an accounting intelligence and data models. So far so good if you want to implement a financial application, now the question is what about the non-financial planning with BPC?

Building a non-financial application in BPC meets more challenges than within IP. For Example, the BPC application expects your data model to contain the required dimensions such as account, category and entity which is less logical in case of a sales or demand planning. Furthermore, existing application type models are based on having values such as financial, consolidation or generic. Another point is that BPC supports only account based data modeling using a single key figure in contrast to BW-IP. Running a supply chain planning solution where you have multiple units of measures depending on material type, is another example that would lead to a rather hardcoded and static solution using BPC as opposed to IP where handling multiple units of measure and on-the fly conversion are a given.

I’m not implying that a non-financial application cannot be realized in BPC but you should be aware of certain system limitations as mentioned above.

In my opinion BPC is still in its development phase of becoming a full force planning tool. In BPC I am missing the standard functions which are predeliverd in IP like: revaluation, copy, deletion, distribution etc. This sound like free advertising for IP, but actually, IP has some shortcomings as well. In IP there is no workflow comparable to BPC (the BPS status and tracking system that can be leveraged by IP does not play in the same league as BPFs), there are difficulties with locking and there are too many steps required before creating a simple input form (e.g. aggregation level, filter, function, sequence and a template in Web Application Designer). IP, on the other hand, has seamless integration with BW (reuse of BW Info Objects and Info Cubes) which can also be leveraged for reporting easily (combine planning and actual data).  See also the differences in the following comparison matrix as depicted below. 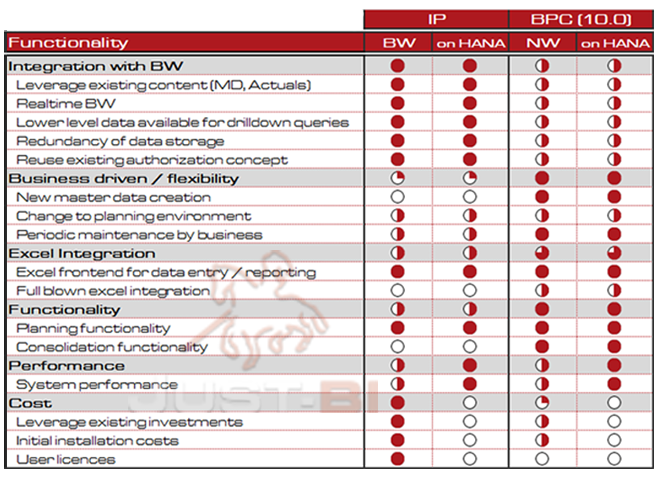 So basically the introduction of BPC Unified and its long term goal to unite the best of both tools is good news. With BPC Unified various new options and features like data modeling, administration, and workflow are improved in the planning application. The UI of BPC Unified is also improved and developed with HTML5 instead of Adobe Flex. With the Unified version, the business is still in the lead. Unfortunately for the script logic programmers, FOX is now the language for BPC Unified and it’s only maintained in the backend.

However the unified toolset is still in its infancy, there are still some limitations and functionality not yet fully developed in BPC unified.  SAP has summarized those in a reference note.[1]

Most of these limitations are confined in the variant “Unified” SAP BPC (the variant of SAP HANA platform).  Note that all constraints are going about models of planning and other functionalities.

This is a highlight of the limitations mentioned

It is expected that most of the current shortcomings will be fixed/added in future releases.

I feel that Unified BPC will add value for customers considering implementing an SAP planning solution in the future. However I do not see yet the business case for companies currently using BPC NW as their reporting and consolidation tool. Further, BPC Unified is only available to HANA customers, this adds another restriction in its use. However, future release of BPC Unified sounds very promising. I will keep My eyes on these developments to inform you about the latest news of SAP’s Planning Strategies.