As I mentioned in my first blog post DT Roundtables at SAP Labs China: Bringing Curious Minds Together! I was lucky enough to be part of a team of external consultants for SAP Labs in Shanghai. Before heading off the first time, I would not have guessed the amount of insights and positive experiences I would bring back with me. China was new terrain and therefore culturally a completely new experience. One has to understand the culture and the history of this enormous country and its people in order to understand the mentality of the people. Being a consultant and coach in Europe already requires a lot of sensitivity, but in a culture like the Chinese my team and I faced a whole new challenge. This first part of my China Blog is a ‘walk through’ Shanghai. I will go into the attempt of comparing the company cultures in the next blog post. 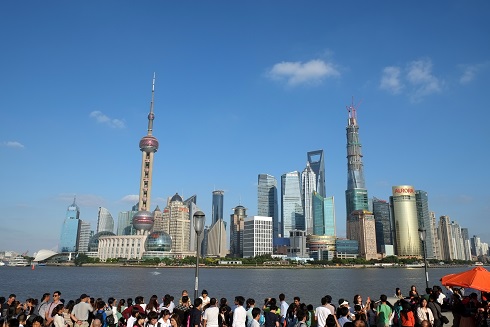 A quick comparison to give those of you who have never been to China an idea of the proportions – Berlin with its 3,5 million inhabitants is THE biggest city in Germany, but in comparison to the megalopolis Shanghai, with a population of roughly 25 million, Berlin would not even count as a city in China.

Shanghai is a gigantic transport hub with the world’s busiest container port. Driven by an engine called capitalism and built of concrete and steel, even with the economic boom and emerging prosperity it cannot hide its history. Equally non-representative for China as Berlin is for Germany, one can still ‘feel’  Old Shanghai – know as the ‘Paris of the East, the New York of the West’ in the 1930s. Especially if you take a walk through the former French and British Concessions with their colonial architecture and shady, tree-lined streets, or when you take a turn into Shanghai’s narrow alleys with their street markets and steaming teapots, which branch off from the gigantic shopping boulevards and multi-lane roads. 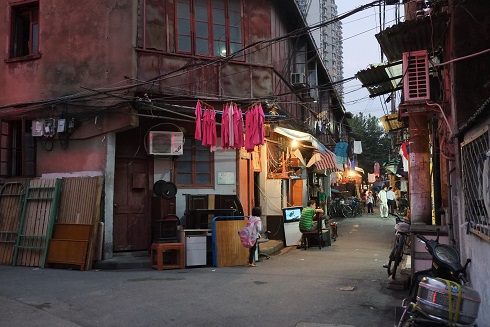 Taking a detour into these narrow, dimly lit alleys, one can easily forget the hustle and bustle going on only a few blocks away. Time seems to have stopped here. In the early evening hours I often got off the metro a couple of stops early to walk home. I only realized the dimensions of the city as my plan of walking a few metro stops would regularly turn out to be 2 to 3 hour marches. Yet, these extensive walks were so worthwhile. I passed street food stands selling anything from Dim Sum (steamed buns/dumplings), corn cobs, and noodle soups to a huge variety of steamed or grilled vegetables and meat/fish/sea food. Taking another turn I’d walk by carefully stacked fruit and vegetable evening market stands next to cages with ducks, chicken and geese but also turtles, water snakes, crabs and all kind of sea food. Walking on I passed groups of men heatedly discussing over their game of cards, often surrounded by curious spectators. I walk by families already in their pajamas, seated on small stools under the dim light of a bare light bulb outside their small shacks, slurping their soup from plastic bowls. Cats and dogs were lazily lying in the streets, watching and lurking for leftovers to be thrown on the ground.

To my Western eye these scenes were so lively, so authentic and at the same time so picturesque that I felt like I was walking through a film set of the days of Old Shanghai. I walked into the next block and passed a shoebox-sized barber shop with bright, neon lighting. Four young Chinese hairdressers with fancy hairstyles sat inside, staring at their smart phones, waiting for the next customer to come in for a haircut or foot massage. Next door, between the remains of an old colonial house, a shoemaker eagerly beat the sole of a shoe with a small hammer, surrounded by a museum of shelves with old leather shoes, tools and a portrait of Mao hanging from the naked wall, watching him. Power cables and clotheslines weave to and fro between the houses. I pass small clothes stands and a stand selling fake antiques. I see a man pressing sugar cane, collecting its juice

in small plastic cups and selling them for 5 Euro cents. Through an open wooden door I peek into a room and hear the sound of folkloric music coming from an old radio, Mao’s portrait also decorates this wall. Children play with a kitten in the back of the room, where an elderly woman is washing the dishes in a bucket. Her husband, has fallen asleep on a rocking chair, the cigarette in his hand is still lit. Turning into the next alley of this labyrinth, I see a group of old women gathering with their dogs, chatting, watching me curiously. I feel extremely fortunate to be able to experience all of this. I will spare you a closer description of all the different smells I came across on my walks, just imagine an evening in Shanghai in July: 40°C, and a humidity of 100%, and on top the smell of ‘chòu dòufu’ – fermented, ‘stinky’ tofu mixed with the dusty taste of the smog in the air and a lot of litter lining the alleys.

Unfortunately these old districts do not interest the industrial leaders, so more and more of the small, gloomy alleys and neighborhoods are demolished to make space for ‘urban development’, or rather gentrification. The transition from old to new is very abrupt, I keep walking south. At the end of the alley the lights go on as night is falling and one of the uncountable high-rise complexes rises into the sky before me. A big fence and a gatekeeper’s house marks the border. “Sun Wonderland” is written in large cursive letters above the gate. Kitschy replicas of Greek statues adorn the entrance, a paradox in itself. The construction reminds me of a 30-storey chicken cage made of concrete. A fountain gurgles in the center of the park-like patio. On the sides of the patio are the status symbols of the Shanghai rising middle class: brand new cars. I have been told that they are the first of all status symbol, the gate to the middle class.

I have never experienced change and growth in such a striking way before. In my opinion Shanghai is a city where one can take a walk through hundreds of years of history in only a few blocks. Old and new are adjacent, just like poor and rich. Every possible space is used; everything is turned into money. Still I have found my peace walking in the shade of the trees in the former French Concession, or in the beautiful patio of the Confucius temple and in the labyrinth of the old town. I feel the economic boom and capitalism rushing millions of people through the gigantic underground network, the increasing number of cars filling the streets and causing traffic jams on the elevated motor ways, and the never sleeping construction sites making skyscrapers rise around-the-clock on top of the swampy ground like mushrooms. Nevertheless, as modern and global as Shanghai may seem, I always felt very clearly that I was only a guest in an ancient culture, which is still deeply rooted in its veins.

The purpose of this blog post is not to deliver a scientific work, nor to be objective. I have checked a few individual terms and definitions to make sure my memory is correct. I have not cited them because everything is written from my own memory and the experiences and impressions, which I have gathered. My intention is to give those who are interested a glimpse into the Shanghai, which I have experienced with all my senses. This post is the introduction to my China Blog; I will build up on this Part I with a blog post in which I will try to give a comparison between the corporate cultures of Germany and China, also based on my own experiences.

Happy to see you picking up blogging again here on SCN. And you've sketched a very interesting picture of Shanghai.

Waiting for the next part 🙂 .

Good morning Fred! Thanks for reading me 🙂 ...yes, my intention was to 'sketch' a picture of Shanghai, to take those who are interested on a walk through the alleys of the old town. It was a nice experience for myself to write this, since it made me go through all my pictures again and 're-walk' my regular strolls through the streets. Next part should be online tonight..

I second that, a good read and thanks for posting. Your description of "Old Shanghai" evokes exactly the type of imagery I've associated with it since reading "The Blue Lotus" (TinTin) as a child 🙂

Hey John! This blog post had almost 3000 words before I first edited it! I could go on and on describing everything I've seen. But I thought as an introduction to SH, before I begin with more serious topics, I should try to keep it shorter, or no one will be willing to read this. 😉 I looked into TinTin, didn't know 'The Blue Lotus' episode before.. I am happy to read that my descriptions evoked exactly the type of imagery you associated with SH! It is nice to know that I was able to take someone on a walk through the alleys of old town with my written words..

Nice read. I love it when a blog post is so well written I can almost sense things myself. I could almost smell the air.

Looking forward to read the next part.

Thank you Tom! I was hoping my descriptions would feel real, John's and your comment show me it worked, and there could be no better acknowledgement! Part II should be online later today.. Greetings to Belgium! 🙂