Ok, ok… maybe that was a little too strong. In general I try to avoid using RFCs wherever possible due to the lack of trace/logging in the called system.

Even though the graphical RFC Lookup function has been available since PI 7.1, it has been tolerable at best, buggy at worst! There must have been countless times where I’ve executed “Display Queue” on the function only to get different results on each occasion even though everything remains the same. It would seem as though there is some cache between supposedly independent calls to the RFC. On other occasions, the input values from the mapping just don’t get transferred to the RFC parameters (viewed while debugging the RFC call) for unknown reasons. I get to the point where once I get the RFC lookup to work correctly, I am very hesitant to make any future changes to that portion of the mapping.

However, one of the nastiest bugs I’ve encountered while using the RFC lookup function is one that causes infinite execution of the RFC. This bug is documented in SAP Note 1674730 with the following description:-

Infinite number of calls are being triggered to an RFC from a standard RFC lookup function used in message mapping. This can cause memory issues and increased CPU utilization.

Granted that it is possible to avoid the pre-requisites that trigger this bug, but this is a high-impact bug that can cause one message/interface to bring down an entire system! It is bewildering to me why there is no patch for this, and the solution in SAP note only suggests to prevent the problem from happening.

When this happens, you can see in the workload statistics of the server (via tcode ST03N) that the RFC calls are insanely high!

Well, life goes on and we just have to find a workaround to prevent this from happening….

To do this, we first need to know what conditions trigger this bug.

More often than not, this happens when the RFC lookup occurs at the item level of the mapping, and we want to optimize it into a single call instead of multiple calls. Then the bug is triggered if the below condition is met:-

Following is an example using the function module SALERT_CREATE. It has a TABLES parameter IT_CONTAINER which allows unbounded input entries. This structure contains 5 fields. 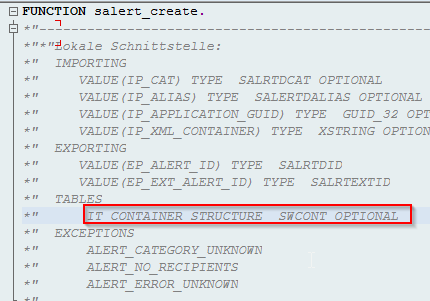 The corresponding structure in the graphical lookup is shown below. Over here, item, ELEMENT and VALUE are configured as input parameters to the lookup function. item is the Parent node, and ELEMENT & VALUE are the child nodes.

The incorrect entry on the left meets the trigger condition for the bug and the SALERT_CREATE RFC will be executed infinitely! 😥 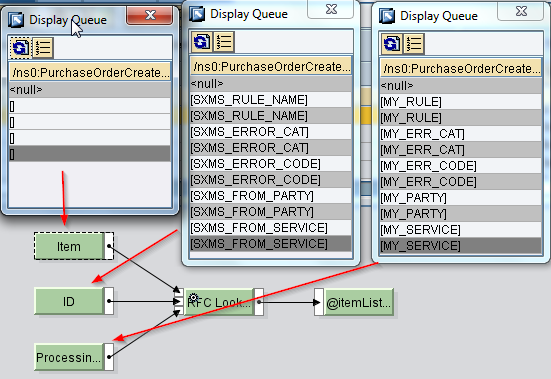 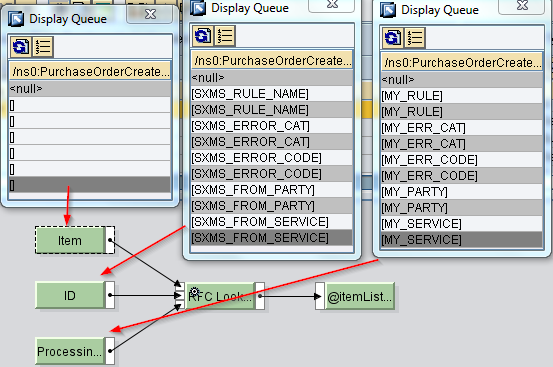 A very informative blog. It is very much possible to miss on such a concept during build. You elaborated it very nicely. Thank you.

Thanks for the feedback - if only SAP would fix this, then missing this during build won't cause such a disaster! 😉

Thanks for the informative blog.

How to check this in case of single stack scenarios?Can you help me?

ST03N is supposed to be executed on the ABAP side of PI, so this is only valid for dual stack system. I am not sure if there is an equivalent in single stack system, maybe you can check if there is anything in NWA.

Thanks for your response.I will try to find out for single stack.

I just started off with SAP PI. I have very similar requirement where i need to read data from a custom table i created for LineItems. I would like to see how the Source code for this RFC FM will look like so that i can write mine.