This is a continuation of my blog A Way of Reading Huge Excel Files in which I described the usage of the sXML parser for an alternative Excel file reader with a massively reduced memory footprint. I followed the suggestion of some of my blog readers (Kay Streubel, Rainer Hübenthal) to add the code to the abap2xlsx repository at ivanfemia/abap2xlsx · GitHub. The abap2xlsx package now contains a subclass ZCL_EXCEL_READER_HUGE_FILE of the existing reader class ZCL_EXCEL_READER_2007.

I owe special thanks to Ivan Femia for helping me with the first steps into the abap2xlsx realm. 🙂

Only the sheet data and shared string table are parsed differently in ZCL_EXCEL_READER_HUGE_FILE, as these usually are the heavy-load parts of an Excel file. The other parts – like style details – continue to be analyzed in the superclass and are therefore parsed with iXML parsers, as before.

How to Use It

The public interface – and therefore the usage – is the same as for ZCL_EXCEL_READER_2007. If you have an XSTRING with the .xlsx file content, you work with the LOAD( ) method; if you have a filename and want abap2xlsx to read it (from application or presentation server), you would use LOAD_FILE( ).

The test report ZZ_TEST_EXCEL_READER (code below) shows the idea.

You can use the report to load an excel file from the presentation or application server, doing the parsing with the “standard” reader or with the new “huge file reader”. As you see, the difference between the two reader versions is only in the CREATE OBJECT lo_reader TYPE … statement.

Decision to Read Files From Presentation Server or Application Server

The possibility to decide between application server and presentation server explicitly is a new feature. Formerly, this distinction was made automatically, depending on the SY-BATCH flag. This will still be the default value for the new optional import parameter I_FROM_APPLSERVER. But now, the distinction can also be made by the caller.

It’s good practice to have the reader as a local object in an own, separate code unit (here: a form routine). This way, all the memory that was necessary during the read process will be freed when the excel object has been built and the reading unit is left.

An Excel workbook is saved as a zip archive containing several XML files. The files sheet1.xml, sheet2.xml etc. contain the actual worksheet data, among other things like style definitions. Here is a typical example of a sheet.xml: As you see, the data start with a separate element named sheetData; in this example, the cells contain pointers to the shared string table (which is defined in another file sharedStrings.xml). 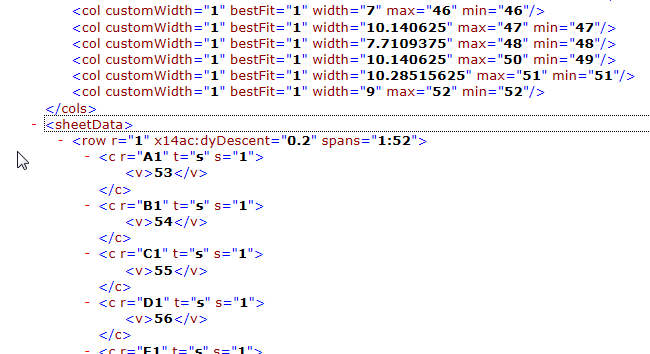 The parser (we use “token-based sXML parsing”, see ABAP Keyword Documentation) for this file can safely skip forward until it meets the opening of element sheetData. Once this is reached, it should read elements and their contents one after another, as follows:

And this is the above text written in ABAP:

A caveat for the sXML parser is necessary: the instance attributes like name, value, etc. are never initialized. The caller has to take care which values are outdated, by looking at the three events “element open”, “element close” and “node value”.

When using the sXML reader, special caution is necessary for elements with mixed content. In the example,

the following events will be raised:

Observe that when the event for value ‘w‘ is raised, the name attribute still contains ‘y‘, although y has already been closed and thus is an outdated value: The sXML parser doesn’t keep track of this outdating – if it would, it had to keep track of the document structure (for example by maintaining a stack of the parents of the current node). In the sXML philosophy, however, all things regarding knowledge of the document structure, are left to the caller – the reading process is restricted to the detection of opening and closing elements, of attribute values, text nodes etc.

Some Remarks on Tests

A parser is an ideal candidate for unit tests, since its output depends only on the input stream – there are usually no dependencies on other states (database, API calls, …). So I implemented all code of the reader using unit tests.

The huge file reader has no public methods on its own – the only public methods are inherited from ZCL_EXCEL_READER_2007,  which is out of the scope of my tests. For this reason, I decided to test private methods. There is a price for this decision: We are not as free as it could be in renaming and deleting private methods, since all these changes also require the test classes to be adapted.

To make private methods testable, we start the unit test section with a declaration of friendship:

With some help methods in the test class, I let the code of a test look more intentional and more to-the-point: Everybody can read from the code of the following test method that the cell datatype “number” is under test: A cell with numerical content (17) should propagate the worksheet in the expected way:

Here, OUT is the “object under test”. As usual for unit tests, a new reader instance is created for each test method in the setup method. The same holds for the worksheet instance here, which holds the result.

Many tests just call the private central method read_worksheet_data( ) and then inspect the produced worksheet instance. This method imports an instance of an sXML reader to read the input data, and an instance of ZCL_EXCEL_WORKSHEET to write the result. Apart from the expected changes in the worksheet’s state, there are no side effects on other data. And the only further external dependency is that the table of shared strings (supposed to be parsed earlier from the sharedStings.xml file) should be available already in the private attribute shared_strings, a simple list of strings (of type STRINGTAB).

In order to restrict the code of the test methods to the essential, specific parts, the get_reader( ) method only receives the XML code snippet for the  cell to be parsed (or multiple cells in a row): before creating the reader instance, this nucleus is wrapped into a document skeleton, to emulate a full XML document:

On Shared Strings and the Boundary Values Problem

As a local friend, the test class is allowed to pre-fill the shared_strings table attribute. Therefore, we can pretend to have already parsed the sharedStrings.xml file by adding some values to the shared_strings table. Afterwards, we call the reader and check that a cell with a string reference is correctly resolved. Here is the test for correct reading of the string table:

For shared strings, the content of the <v> element is the 0-based index for reading the string table. Therefore, the cell content in this example has to be ‘Test2’ after parsing.

In a former version, I had been too minimalistic: I used only one entry in the string table, and the <v> element contained 0, not 1, to point to this one entry.

The test in its former version passed, but it didn’t detect a bug in the code, due to the “boundary value” anti-pattern: 0 is a special value, since it also is the initial value for integer variables. The bug was that the index was not transferred at all to the variable holding the index, which thus remained on its initial value, zero.  Only by extending the test with a second string and working with the non-special index value 1 instead, I could reproduce the bug – and then fix it.

While working on the code and testing it, it’s good to have a look on the test coverage. It shows possible uncovered coding extracts in which a bug might be hidden.

Of course, some parts are intentionally uncovered. In this class, the methods load_shared_strings( ), load_worksheet( ) and get_sxml_reader( ) have a zero coverage on purpose, since they provide data from outside. I only test how the class works on these data. But the rest of the methods  have a 100% statement coverage.

The branch coverage (a column which is hidden by default in the coverage analyzer’s default layout) shows that some conditions could still be added. Indeed, I have no particular tests for invalid sheet.xml documents – for example, I always expect that there is the sheetData element, as the Open XML specification requires.

As the boundary value problem above shows, full statement coverage – or even full branch coverage – is not sufficient for detecting all bugs sleeping in the code. An instinct for potential bugs is necessary while writing the test method. It’s an interesting change of hat: when writing test methods, we are supposed to turn into the most fervent critics of ourselves!

thanks a lot for taking your time to update the code and sharing this with us! 🙂

I really appreciate that you're always going for the extra mile and make your posts brimming with excellence. I'm still trying to catch up with all your brilliant ideas.

This was a mess 😆

First of all i had troubles to find the nugget for the new build. I was really upset why nothing was downloaded, but it was my fault not to see the download button in the upper right corner 😳

Again: searching the website, the plugin MSAG was availabale... but not downloadable 😡 At least i found a working link for a bundle of plugins. Downloaded, installed... and ... WTH... the exception class zcx_saplink changed and i needed to install the main program as well 😥

So, at least i didnt got only your enhancement, i got a new abap2xlsx, a new saplink and new and actual plugins for saplink 🙂

Awareness of the day: Do not postpone updates, it will catch you up sometimes

thanks for your feedback! When starting to work on abap2xlsx after your advice to put the code therein, I had similar problems - and for the same reason! Our local version of the package was completely outdated, and the same was true for the ZSAPLINK program...

> Do not postpone updates, it will catch you up sometimes