To make it easier to use the advantages of hybrid apps with Neptune Applications we have launched the Neptune Client which is available on Google Play and App Store.

Windows Phone and Windows 8 apps are in development and should be available as well in the near future.

Just search for “neptuneclient” on Google Play and “neptune client” on App Store and you should find it: 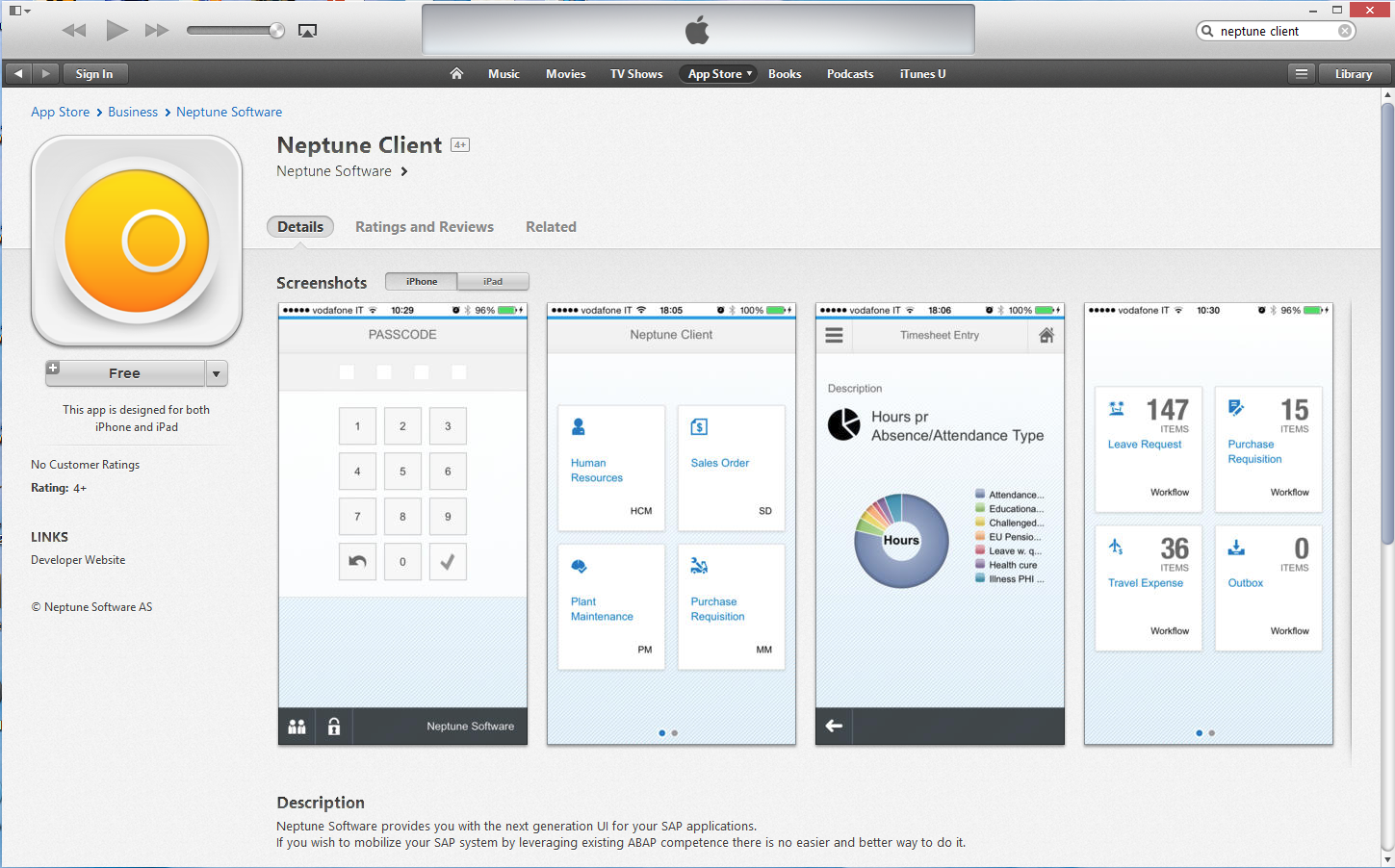 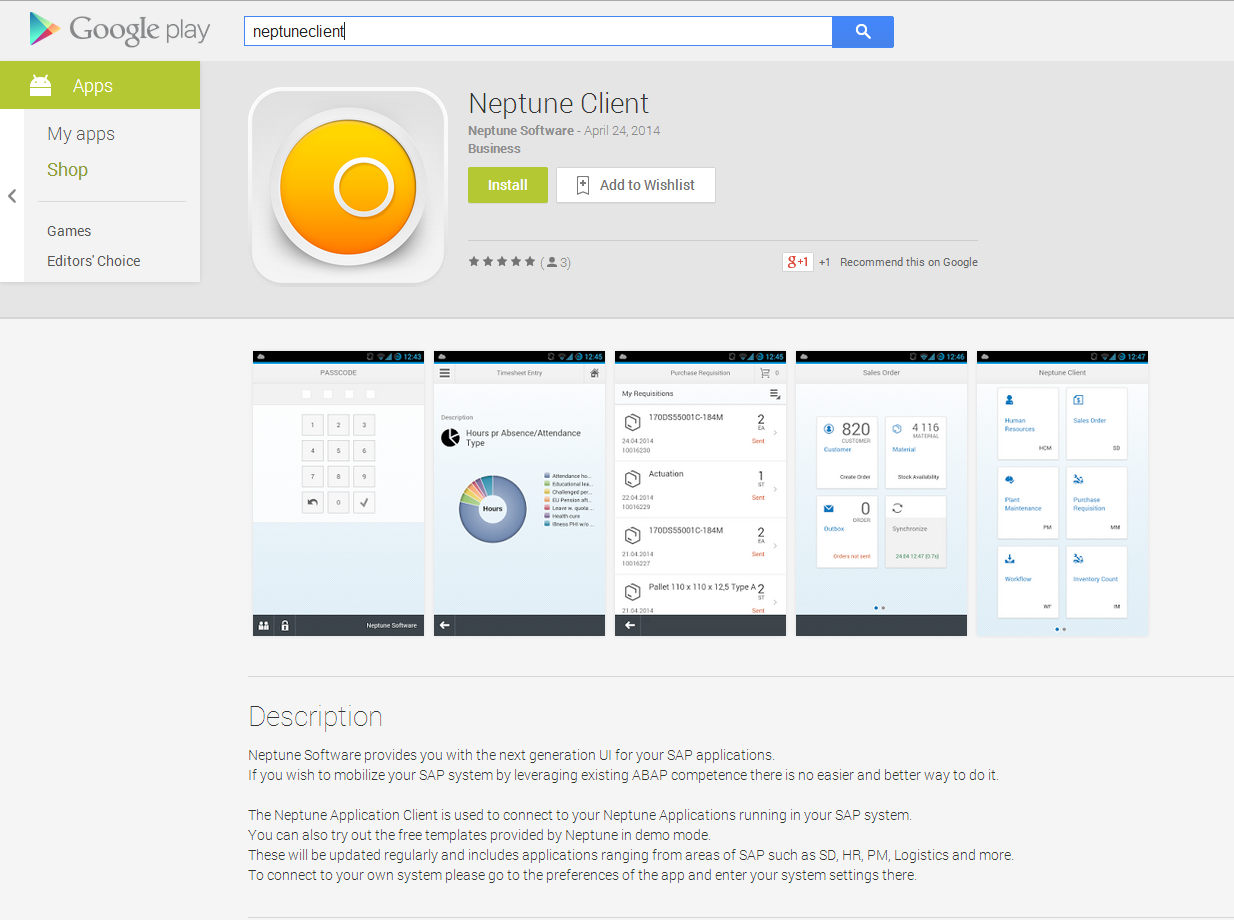 Some brilliant developers from TechEdge such as Luca Grilli  Fabio Di Micco and Andrea Ranchetti got the task to develop this.

The result is an app that will use our IDES system for demo purposes but that can easily be configured to connect to any SAP backend with Neptune installed. Just go to preferences and set up your own backend. 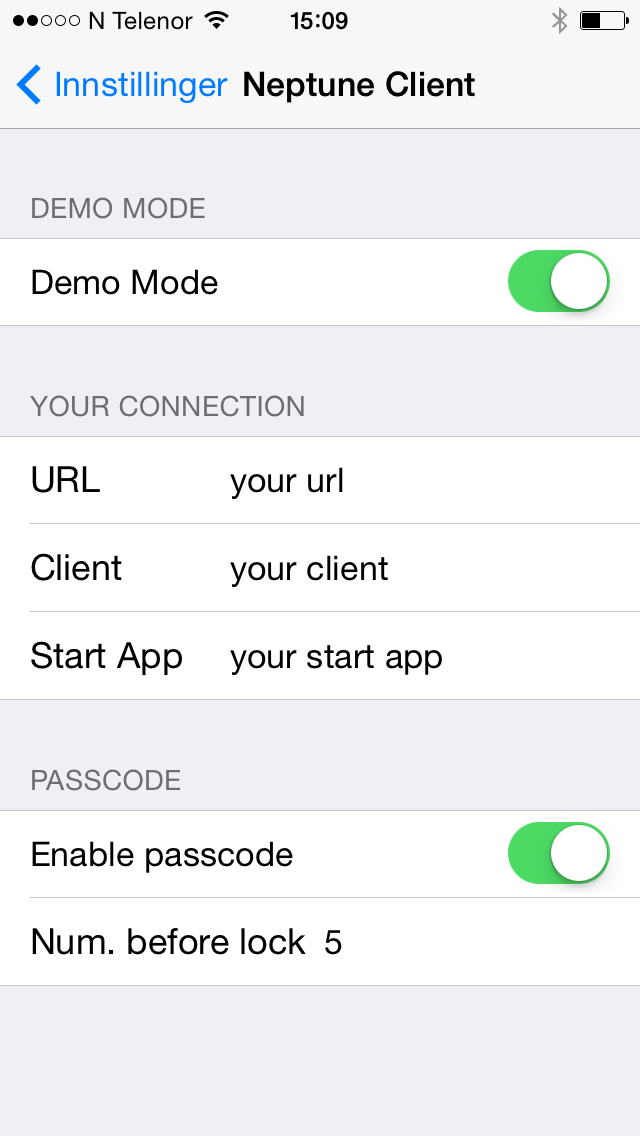 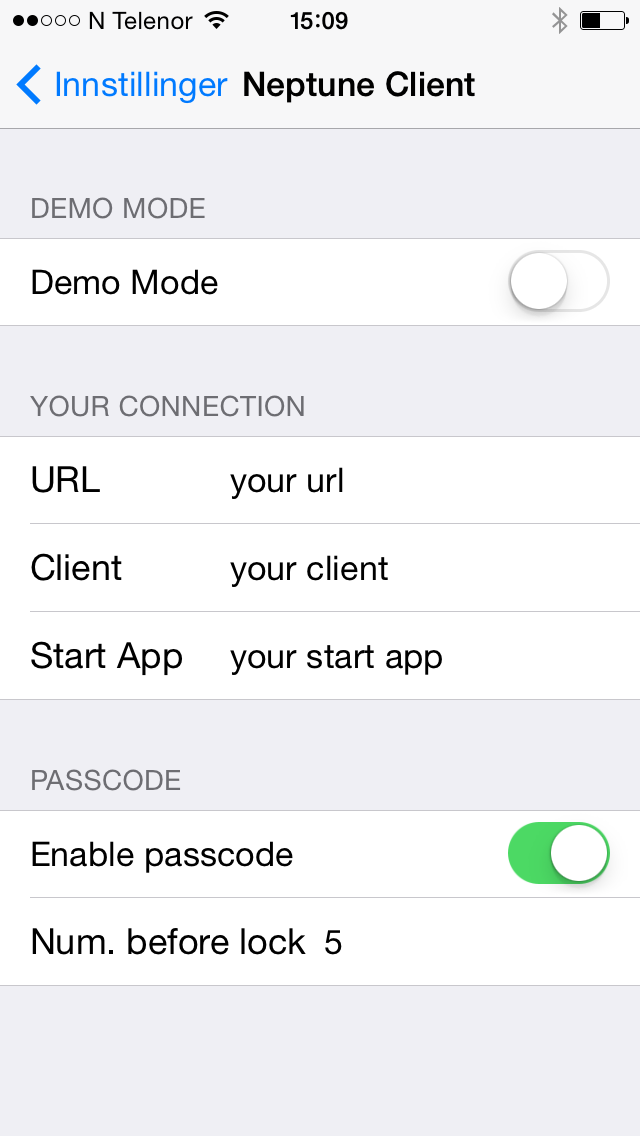 The solution is based on our Neptune AppCache functionality for SAPUI5 and thus the apps you run on it will automatically be updated when an application is changed in the ABAP backend.

When using the demo apps there are some that are running in offline mode so remember to synchronize the data the first time you test them out (Synchronize tile on some of the apps like sales order). 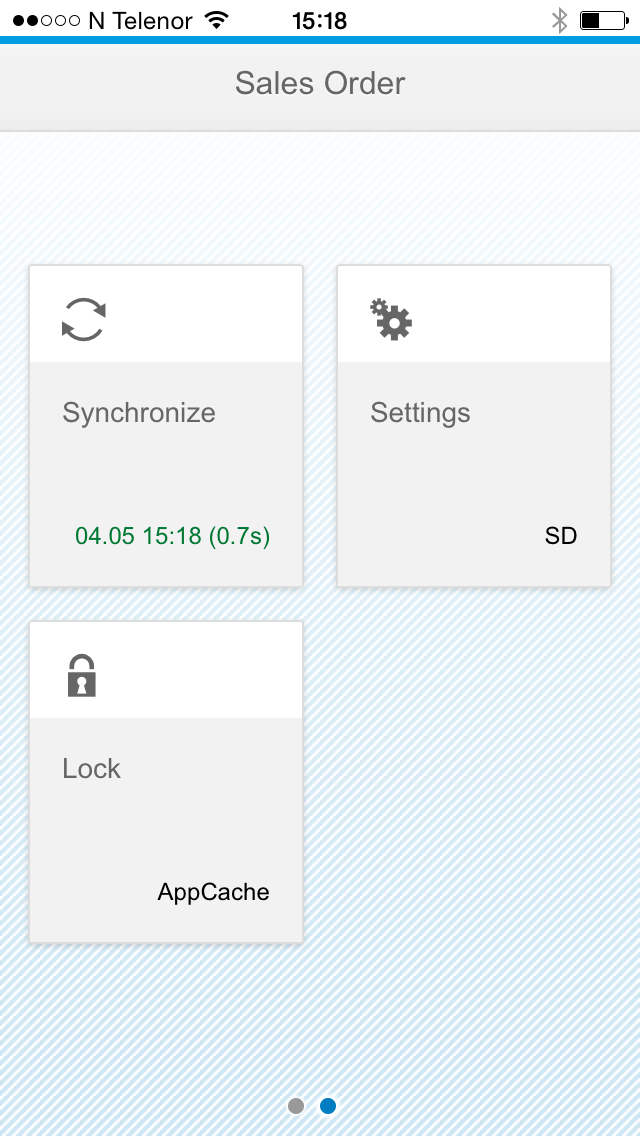 All standard Phonegap/Cordova plugins are available and in addition we added some of the most common third-party plugins such as the BarCode scanner. There is an example of this in the demo Inventory Count App – remember to sync this app as well. 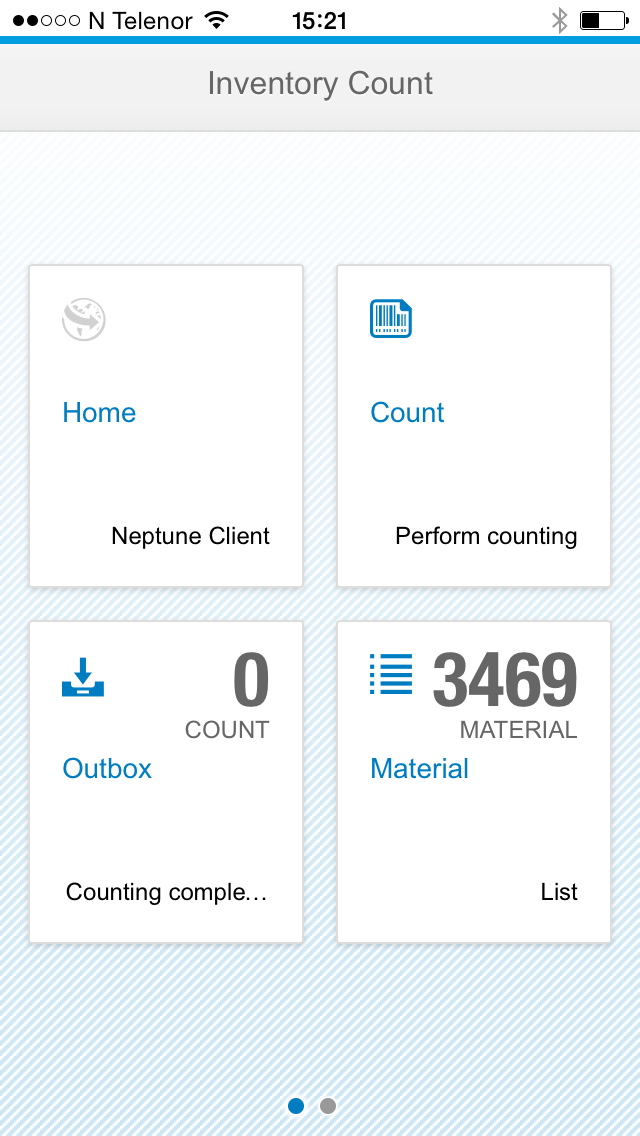 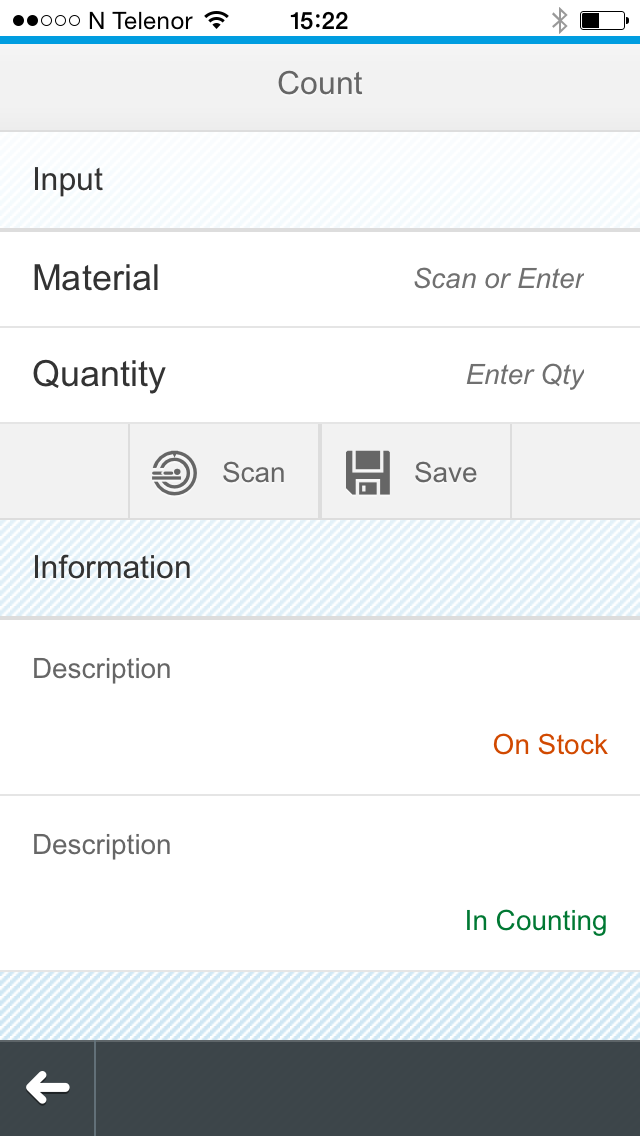 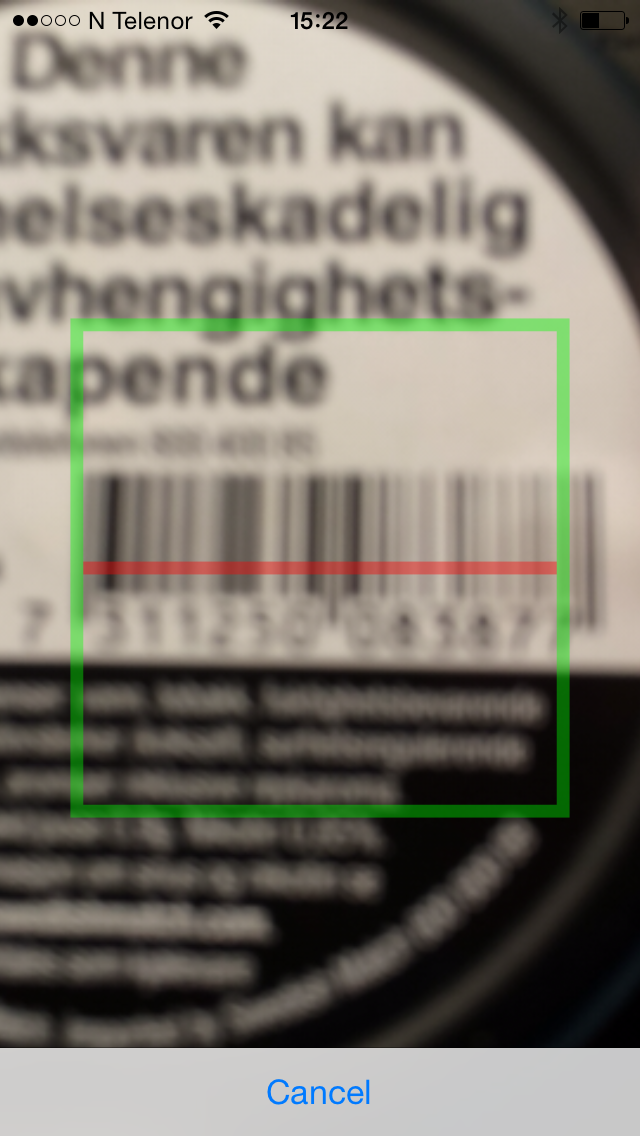 Download and test it out. It should give you an idea on how SAPUI5 works with Hybrid Apps even if you are not using Neptune Application Designer for development.

We will continuously add new content to the demo apps and as stated above we (That means the TechEdge developers 😉 ) are working on the Windows apps and also will try to include SAP Mobile Platform configuration for the next update.

Works well in my Android phone !! Simple and all in one solution.

Just as a side comment If the listview is large, the app is probably badly designed. The human being can't deal effectively with a large list.

In the cases where a listview is very large, you have to make it depend on a search criteria instead of showing the user 1000 entries which they will never be able to scroll through anyway.

That's a good point, since the app is based on web technology, managing large amount of data would be difficult, in that case a search bar is needed in a listview.

It's valid for any app, web based or native. my experience is mostly with native, ios and android, and one of my main design concerns is making sure list views are usable. For example, if you are making a sales app and the company has 4000 skus, showing all of them while selecting a material is useless.

These apps are only demo apps (and I asked Midhun which app had a large list, will fix it quickly only by changing the ABAP backend 🙂 ) It is very easy to avoid large listviews with SAPUI5, just add one parameter and you get a growing list for instance and then you decide how many entries should be visible to the user.

A cool thing, if you test one of the offline apps, is the speed of searching through offline content with our enhanced find method from our offline architecture.

Which app was that?

Also we will update with UI5 1.20 version in the next update where SAP has changed to hardware accelerated scrolling, something that should help with the sluggishness as well.

Anyhow, I updated the app with growing list. Just lock (from first page just swipe right and click the lock tile) and enter your pin code again. Your app should now be updated with a growing list for the requisitions. Pretty cool update functionality with AppCache

I also connected it to our own server. But now the global JS code of my app is gone. How do I need to change my existing apps in order to include it into AppCache?

Hi Mark, great that you liked the client.

When you activate a Neptune Application in the designer it will get a new version and the client will download it next time you log on.

thank you. I just moved the script from Header to an inline script and now it works. Great!

I think the presence within the App Stores is really important and the new architecture is terrific !

Thanks Sergio, Your team has performed great delivering this. TechEdge is  the best SAP consultancy I have worked with as a customer.

I Like the Neptune Client but maybe someone can help me when not using demomode.

in url we type our url + /neptune/z_demo_neptune.html

where z_demo_neptune.html is the app

in starting app we type: z_demo_neptune

i always get a no connection: how should url and starting app should be set up correctly?? best regards oliver

The URL should only be the server like this:

Hope this solves your problem.

Can anybody help me? how to use it ?

Sure, I just created a blog for you on how to use it. Please check out this link: Neptune Client : Neptune Software

if backend and frontend are two different systems then hw is neptune set up?

Neptune apps are using an application class connected to the specific app that holds the business logic. 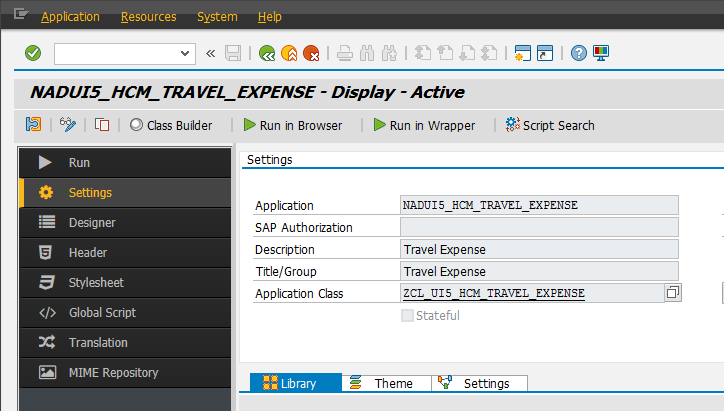 In a browser scenario, the front-end and back-end will be the same system. On a mobile device use Neptune Application Management to generate hybrid apps. If you have other systems than SAP you can chose from front-end integration or back-end integration.

Its really great for all the SAPUI5 lover who want to know how it works 🙂 . Thanks Stabell and Ole for your help. Can someone guide me from ABAP prospective if I want to do some code practice then how can I do ?

We are soon releasing 3.0 (Will be ready for TechEd Berlin) but in the mean time you can check out this video: