Beacons are a new technology that enables proximity sensing. They are small, cheap devices that can be detected by smartphones in order to provide location information when GPS is not available. As with all new technologies it pays to work with them hands-on in order to understand their benefits and limitations, so we have started testing them against real-life scenarios.  Because this technology is evolving from month to month, we will try to share results in a timely manner.

The new breed of beacons, based on the Bluetooth Low Energy specification, have the potential to simplify projects that need proximity awareness.  They work by passively broadcasting an identifier that devices such as smartphones can pick up.  Then they can be used as triggers and data sources in any number of mobile apps with little changes. Small initial cost, little maintenance, re-uses, what’s not to love?  Well, maybe some practical limitations at this level of maturity.  For example, many scenarios long dreamed of by retailers, conference hosts or others call for a precise location of the user.  If you want to send the consumer a voucher for a 2-for-1 for the item s/he is looking at, you need to know the location to the inches.  If you want to greet him/her by name, you need a foot or two of precision.  Do beacons provide the stability and accuracy needed for that?  That is what we will investigate in this blog post. If you want the TL;DR spoiler: presence detection is good, but precise positioning not there yet.

To check the precision of the indoor positioning that can be derived by current beacon technology I planned to use triangulation calculations, more accurately called “trilateration” in the case of a 2D implementation. That requires as a basis a measure of the distance from 3 fixed points, the beacons.  However, the findings are that the trilateration could not be performed, because of the lack of accuracy in the measure of the distance from receiver to beacon.  There seem to be four main reasons to that lack of accuracy.

1) The signal strength of each beacon fluctuates a lot even when the beacon, the receiver and the testing environment are stationary. The noise of the signal data from the beacons was so random that I couldn’t smooth the data to capture important patterns in the data set.

2) Depending on the way that the user is handling the receiver device, the readings can change a lot as well.

3) The state and configuration of the beacons such as battery life, advertising interval and broadcasting power impact the readings.

4) The readings also change with the operating system of the receiver devices.

As a result, I would say that beacon technology is not ready for indoor positioning, tracking, navigation or scenarios that require precise location. For the time being, it would be better to concentrate them on proximity detection, what we can call “presence”.

I conducted the same experiments with iOS and with Android as receiver devices.  I tested out three different manufacturer’s beacons: Estimote, Gimbal (Qualcomm) and Tōd, which look as follows roughly at scale.

I used three beacons of the same brand in each test, gave them fixed positions and logged the distance evaluated by the receiver for trilateration calculation and for statistical analysis. To reproduce the test, you can follow the Experimental Setup section below.  For sample results, look into the Test Results section, and for theoretical overview of the methods into the Trilateration section.  And let me know of your findings!

18 Tests were conducted, i.e., all combinations of:

However, with both receiver devices the measured distance is still far away from the actual distance, as can be seen on the below extracts.

In addition, as shown on the below figures, the measured distance could be greater than the actual distance or vice versa. 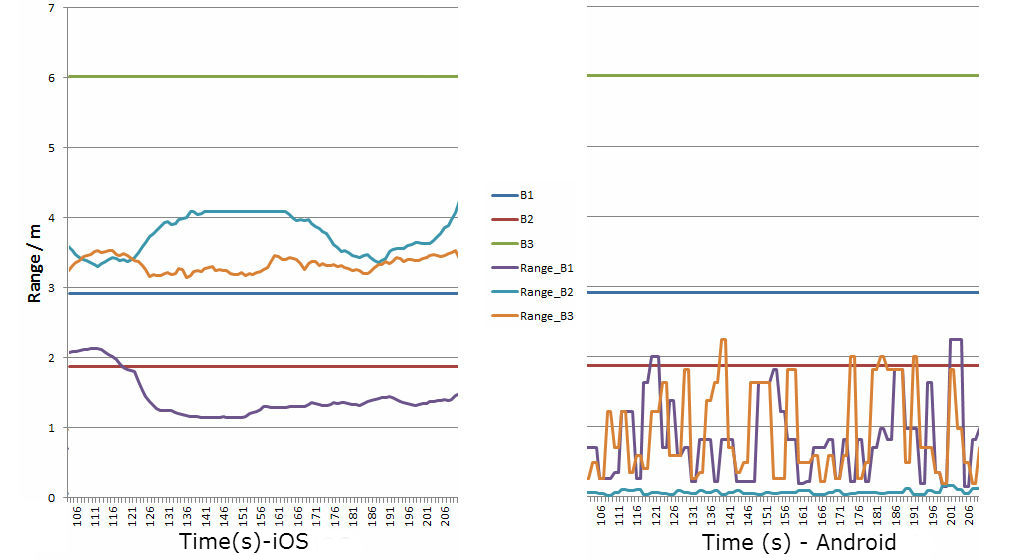 In my test application, I use trilateration for the implementation, which is the same technique used in a Global Positioning System (GPS). In a nutshell, trilateration is a geometry method to determine your position based on the physical position and relative distances of three referenced points. There are 3 conditions:

The practical implementation requires a good deal of mathematics. Again, if there is interest, my colleagues or I can post more about this.

Here is a screenshot of the trilateration test application which runs on Android devices. It displays a floor plan of our office in Montreal. The screen representation is proportional to the actual floor plan. Three Estimote beacons are installed in the room in a fixed position. The signal from each beacon covers the entire room. For this little testing, that means that the condition of having intersection is more than fulfilled, since the 3 signals are superimposed. The app itself was developed using the Estimote SDK. 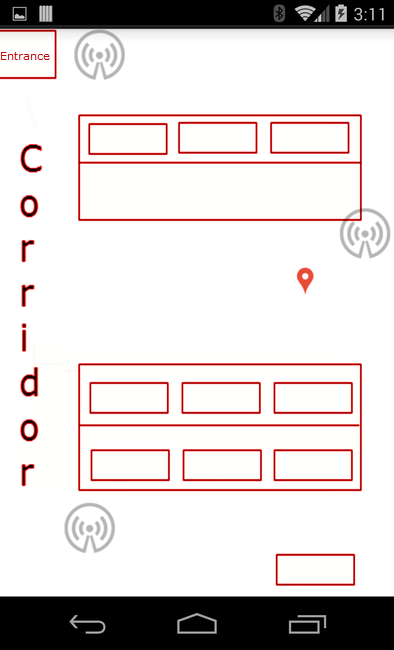 Normally, the working conditions should be correct, and we should see the red dot moving as we walk around. Unfortunately, that is not the case. The red dot didn’t move most of the time due to the fact that the signal strength of the beacons was not stable at all. The relative distance reported by the app was extremely small even though the physical distance between the device and the beacon was large (a few meters). I also verified separately that repeat experiments in the same conditions measured different signal strengths.

Based on these results and the current technology we’ve concluded that beacons are best fit for proximity detection rather than precise location coordinates. For example, you can tell if a person is in a meeting room but not what seat they are sitting at. This still makes them very useful for many indoor location related use cases where you need to Presence rather than Positioning. 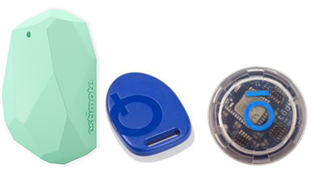 Forget to mention in the post. Special thanks to my manager Nolwen mahe and my colleagues Stephen Petschulat and Marius Cismas for helping me to proofread and organize the content.

Thanks for the great summary. We are also looking at that exact scenario. Our hopes that were with trilateration the accuracy would be better. We of course also need 3d as a building has more than one floor.

We are still looking at ways to achieve indoor location awareness and are always open for more ideas.

My colleagues and I had a few emails exchange with some tech guys from Qualcomm. They said the Series 20 Gimbal beacon is more accurate and stable than Series 10. They will ship me one to test. I will let you know how it goes once I receive the beacon.

Actually, discriminating between the floors is pretty much an open problem at this point, right, Wenjun?  Here, we observed that we would detect beacons on another floor as well as on our own.  Over to you, I will gladly be contradicted.

Nolwen, you're right. I was able to get the signal from the beacon located on another floor.

First of all, thank you very much for sharing your experience! My collegues and I were trying to implement triangulation/trilateration on Beacon with Android devices to test the indoor positioning using Estimote Beacons. However, the result wasn't successful. [removed by Moderator]

Thanks for your interest. I am more than happy to answer your questions. [removed by Moderator]

Thanks for sharing this interesting article. Your experiment is truly comprehensible for a newbie like me.

Based on the summary, I still believe that people would be more excited to see "PRECISE DETECTION" rather than the idea of "PROXIMITY DETECTION".

Consider the case of a person in a shopping complex, you can tell that he is inside; however, the need to know his exact location would surely be a rewarding user experience. This is what I would call "Intelligent Adaptation".

I am just sharing my viewpoint.

Thanks for your detailed article it really helped us a lot.

We are currently doing something very similar to what you did here: Trilateration + Estimote beacons and the results are not very satisfying due to the noise in the signal coming from the beacons, the positioning is not very accurate.

I have learned from your previous comments that you will be trying the Qualcomm Series 20 beacons, if so, did you reach any good results?

I received Qualcomm Series 20 beacons. I didn't have a chance to test it. I will let you know if I get the result.

Thanks Wenjun, waiting for your results!

We are continuing with practical experimentations of BLE beacons, in advance of delivering SAP Beacon Management Platform next year.  See the Pilot project with the City of Antibes, on a Tourism scenario, in the blog: http://scn.sap.com/community/labs/blog/2014/12/02/smaller-than-a-hockey-puck-and-a-p%C3%A9tanque-ball-the-ble-beacon

Thanks for your post. I'm doing thesis about the iBeacons and I like the idea that you have implemented. I would really appreciate if you can post the trilateration implementation to determine the user location just using the Estimote SDK. Looking forward for your reply.

I am interested in the trilateration topic using a good math.

Have you created a blog post for it already?