I woke up in a cave this morning and everything became clear.

Imagine yourself walking into a cave in the time period 3200BC – turn on your flashlight and inspect the walls of the cave (ok, so you don’t have a flashlight). 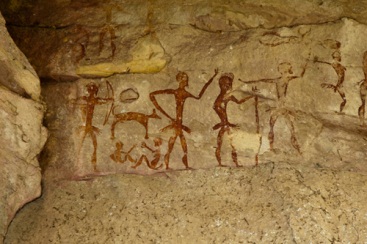 Cave paintings and eventually more sophisticated hieroglyphics were used to communicate a story graphically; they told a story through pictures and at the time, this was the most effective way to communicate since “language” was a foreign concept, no pun intended. Then as languages evolved, graphics and imagery became less a means to communicate and that was fine, except for your needing to know the language! If you were fluent, then there was no problem, if you were not, good luck. Ironically, when people today don’t know one and other’s language, you may see them “drawing” on a napkin to explain their idea or help the other party understand the topic. This actually works! Pictures do tell a thousand words and if this is true, 3D animations tell a thousand stories – that is what the SAP 3D Visual Enterprise is all about. The SAP 3D Visual Enterprise allows companies to take complex tasks and processes and “tell a story” through 3D animated graphics and imagery. Assembling an F-15 Strike Fighter jet by reading a text and 2D illustrated manual, is a very daunting task. Before adopting the 3D SAP Visual Enterprise, Northrup Grumman used PowerPoint slides as work instructions for their technicians. After seeing the Visual Enterprise solutions, Northrop Grumman decided to make the process far more efficient by providing to their technicians 3D animated work instructions instead. The result: training time was reduced and technician productivity went up along with product quality. All driven by the clarity and simplification brought about by the 3D animations delivered by the SAP 3D Visual Enterprise. So you see, we have come full circle, back to the caves where visualization was communication, only now we can see everything in 3D – and the picture is much clearer!

Don’t miss an opportunity to see the SAP 3D Visual Enterprise for yourself at SAPPHIRE Now in Orlando June 3-5.

What sessions do you recommend we attend?