MSS provides an option to send a meeting invite via Email for Reminder of dates. For example, end of leave of absence.

Problem with the coding in method CREATE_APPOINTMENT is that it sets meeting organizer and meeting participant as same person. For example, if user Parag Parikh access MSS and tries to send an E-mail to update Calendar , the options to Accept, Decline etc. are disabled for him. At the same time, this invite does not update calendar of the Manager.

Some of the options would be,

2) Changing meeting organizer as some generic user ID when sending Email so that manager can accept invite to update his calendar. i.e. the meeting invite works as a reminder in Manager’s calendar.

3) Implement an over-write exit for method CREATE_APPOINTMENT/implicit enhancement at the begining of the method and implement E-mail sending method per business requirement. For example, replace SAP code to send meeting invite with the code to send a .ics file as attachment with E-mail. SAP code in method CREATE_ICS_FILE of class CL_HRMSS_CENTRAL_SERVICES can be used as reference.

option 2) becomes little tricky because of the position where SAP calls BAdI HRMSS_B_CALENDAR_APPOINTMENT.  This BAdI is called after the appointment is saved in the database. As a result, meeting organizer can not be changed in the BAdI.  Method SET_ORGANIZER will return an exception if called inside the BAdI implementation. 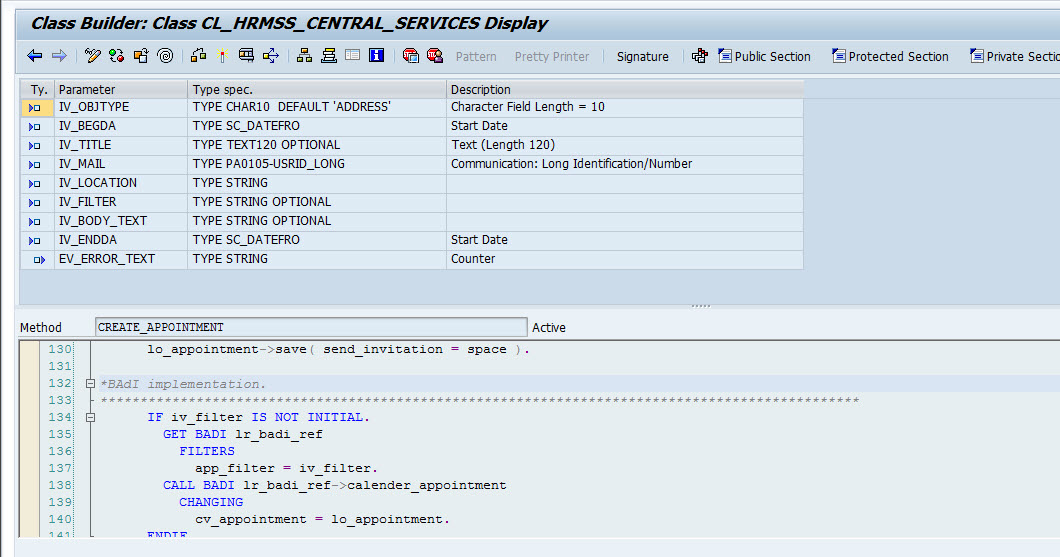 Instance of new appointment can be passed to changing parameter CV_APPOINTMENT so that SAP will send meeting invite via E-mail for this new appointment. As shown in example below, user ID WF-BATCH was used for demonstration purpose. Options to accept or decline meeting were enabled for manager Parag Parikh as now meeting organizer and meeting participant are different.

I have a question for u, can we set up reminders for meetings & participants acknowledgements??

You can send .ics file with an Email from ABAP.

covers this in detail.

Glad that people are sharing such Quality content in SCN, must appreciate.

May I know the version for which Time Approval & Reminder service is available.

Thanks Srikanth. Let me know which version are you referring to ? ECC release?

My Question: Is it available from Ehp5 onwards or any other versions ?

Below link provides more information on the MSS Time Approval and Task Reminder. This is POWL based iView available from ECC 6.0 , MSS Add on 1.0