The medical paradigm is shifting to 4P (Personalized, Predictive, Preventive, Participatory)-centered medicine, moving away from the existing understanding of diseases which was experiential and intuitive. The change in paradigm was an effort in part of the move toward “evidence-based healthcare”, with its implications extending into the quality of medicine, patient safety, and even hospital management, which in turn are, managed by the form of clinical indicators.

As medical information technology reached full digitization, the health IT industry flourished allowing room for expansion of data volume to assist the “evidence-based healthcare”, and the formation of a data warehouse that stores health data made quality management possible.

Full digitization does not guarantee automatic extraction of objective data for developing clinical indicators. The elements of the indicator need to be populated by standardized and cleansed data, and should be utilizable from a users’ point of view. With these aspects in mind, we developed a distinctive CDW that meets the eye level of users and suits the properties of the indicators.

The CDW is critical to the computerization of indicators. When managing indicators based on the hospital information system (HIS) utilizing the vast data from the entire system, speed and stability are the two most crucial factors. Extracting or instantly recalling data applying complex rules and numerous types of data at the same time to construct indicators may hamper speed and stability, and this in turn will strain the HIS. In order to prevent this, the clinical research activity area and indicator management area were separated when implementing the system. In the first stage, data that will be used in the CDW was determined from a user analysis, and a database was implemented by stacking necessary data in the staging area from the HIS using the ETL tool. To establish the data marts in the DW Appliance during staging, the previously defined conditions of each indictor was applied.

When the data mart was created in DW appliance, a business intelligence tool was utilized to support multidimensional analysis. Users can call up reports, which offer at-a-glance view developed by the engineer based on user needs, and view the default form data or conduct other multidimensional analysis utilizing items modeled onto the relevant mart’s database. Multiple reports can appear from a single data mart; therefore, the number of marts does not need to be many as the number of indicators or reports. The following figure is the architecture for monitoring clinical indicators using the in-memory computing-based HANA platform. 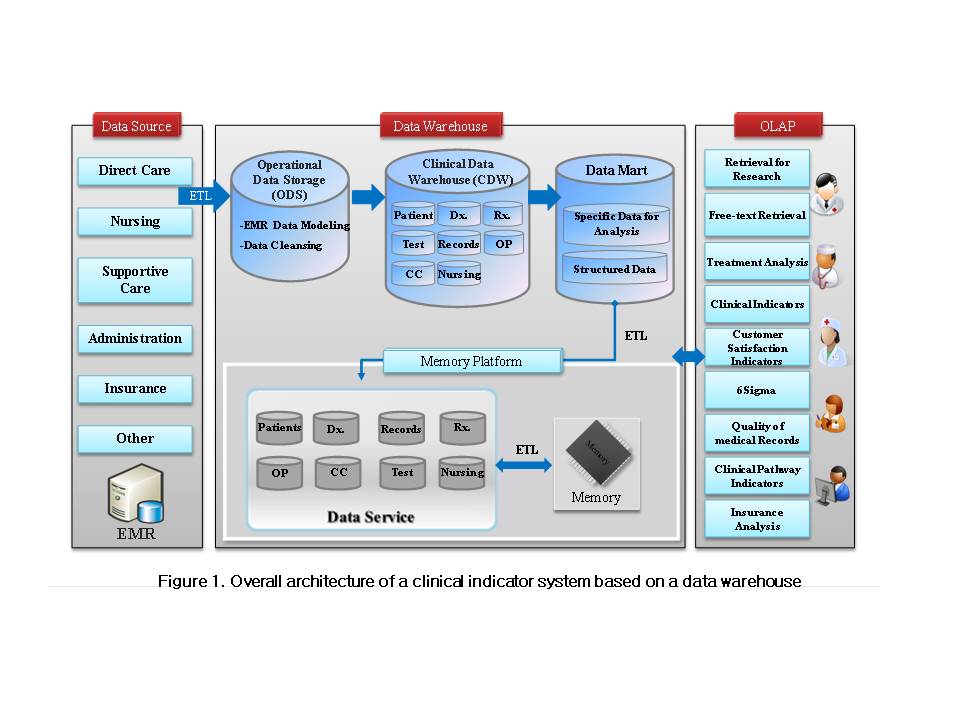 We have 350 indicators of which 320 are computerized as of July 2013. As one of our many use cases where clinical indicator contributed to improving quality of care, we were able to maintain optimal dosages of preoperative antibiotics by giving feedback of preoperative antibiotic prescription through continual monitoring. It can lead to an optimal selection of which preoperative antibiotics to prescribe. Following the application of the clinical indicator, the administration rate of aminoglycosides and 3rd-generation cephalosporins decreased to less than 2%, which was far lower than the recommended rate in Korea of 10%. As another example, the average length of hospital stay for inpatients has steadily decreased in our hospital. 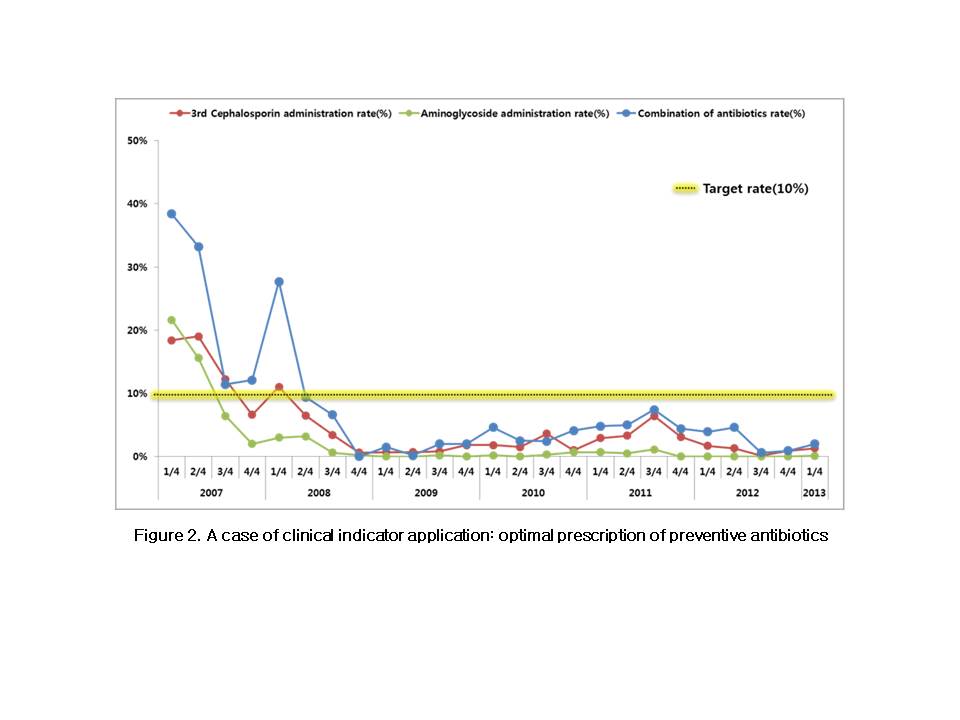 For the development and maintenance of the clinical indicator system based on CDW using HANA, one engineer and a coordinator were allocated. Through the system, lots of various indicators were efficiently developed and managed with less labor. The hospital staff could access
the clinical indicator system to check, with very simple operation, their or their department’s current status and goal, and the improvement analysis report to improve the value for them or the department they belong to. This is not a hypothetical scenario but an actual case of how the staff of our hospital utilizes the system.