Punjab’s Orange Cap front runner Glenn Maxwell prepares to power his club to the top of the Indian Premier Twenty20 tournament table against a Hyderabad side seeking their first two points. Kings XI have been spectacular in the crease this season but will have a foe they failed to beat in last year’s tournament. With historical data loaded into SAP HANA we can gain insights on past clashes between these two sides to preview tonight’s match by creating visualizations in SAP Lumira.

Hyderabad successfully overhauled Punjab’s 123 run target to win by five wickets with seven balls remaining in their first 2013 meeting at Rajiv Gandhi International Stadium. Check out the match’s Manhattan chart that was built in SAP Lumira.

The Sunrisers’ bowlers held Punjab to only 6.15 runs per over by taking nine wickets and holding two Kings XI batsmen to zero runs. The Man of the Match, Hanuma Vihari, pitched a brilliant over for the Sunrisers conceding only two runs on six balls for a minuscule economy of 2.00. Thisara Perera also bowled well in the match conceding 25 runs on 24 balls for a respectable economy of 6.25. With SAP Lumira we can quickly create an pie chart with depth that details how effective each of the Sunrisers bowlers were in the match. 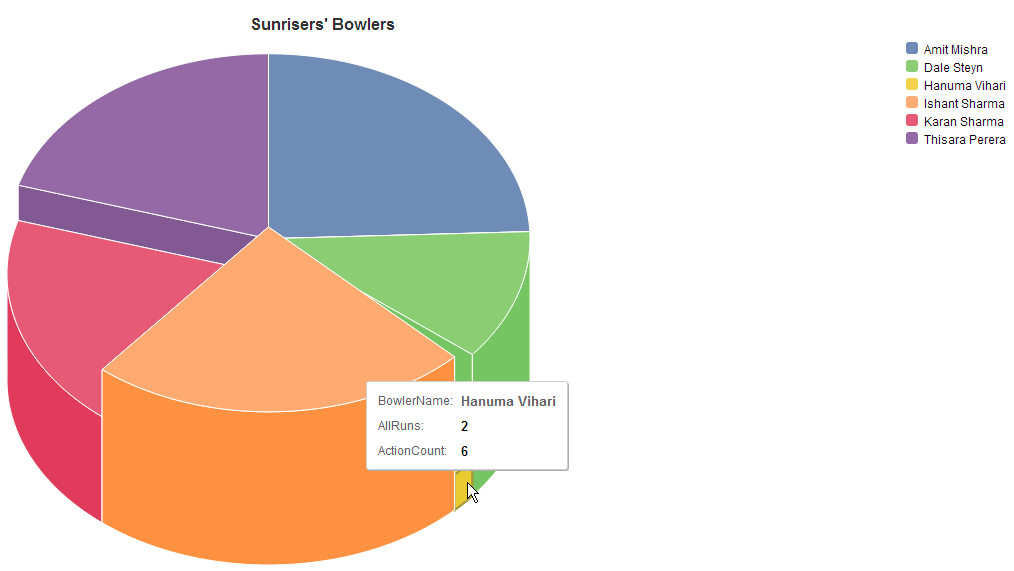 Vihari earned his Man of the Match honor by leading all scorers with 46 runs on 39 balls. Vihari knocked five four and finished with a strike rate of 117.94. The Sunrisers also got some excellent run scoring production from all-rounder Thisara Perera who scored 23 runs on only 11 balls including three sixes for an impressive strike rate of 209.09. With SAP Lumira we can chart both Vihari’s and Perera’s innings ball by ball.

Hyderabad defeated Punjab again in a night match at Punjab Cricket Association Stadium in Mohali on May 11th. The Sunrisers were effective in their attack and easily defended their 150 run target in route to a 30 run victory. Check out the Manhattan chart of the match’s action that was created in SAP Lumira.

Parthiv Patel’s 61 runs on 47 balls earned the Sunriser’s wicketkeeper Man of the Match honors. Patel struck five fours and two sixes for an effective strike-rate of 129.78. Check out the area chart of Patel’s innings ball by ball.

The Sunrisers’ bowlers surgically minimized the Kings XI’s damage during their chase by taking nine wickets and giving four Punjabi batsmen a duck for the evening. The Sunrisers’ Darren Sammy was quite efficient in mowing down the opposition by taking four wickets and dismissing another pair of batsmen via run outs. The West Indian National had a bowling average and economy of 5.5 and a strike rate of 6. With SAP Lumira we can create a pie chart to visualize all nine of the wickets Hyderabad took in their May 11th victory. 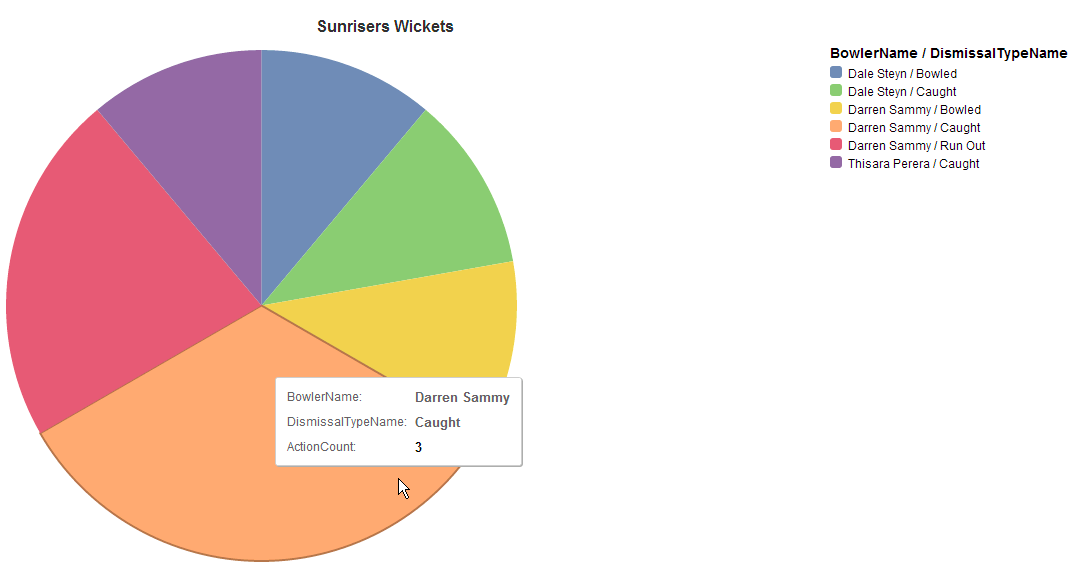 Can the Sunrisers’ bowlers successfully stifle the rampaging Punjab batsmen Miller and Maxwell?