For the IT administrator, there is a very common requirement to have a method to push software to end user’s systems silently. Using this so called silent (or unattended) mode allows the Admin to specify desired installation options via command line or response file without requiring user interaction. Below I’ll outline the command line syntax one can use to perform an unattended installation of the Excel Add-On for SAP Sales & Operation Planning.

Note that you may need to remove any existing S&OP Excel Add-Ons before installing a new version whether you are installing silently or through the traditional “interactive” method depending on which version you are using. You can easily test this by simply trying to install over the top of your existing installation. If you intend to upgrade your current version then you’ll need to switch SETUPPHASE from Install to Update.

The command is as follows:

In the example I’ve shown above, the installation media (installer) is in the root of my C: drive and the name of the file is SOPEXCELADDON01_2-10013248.exe. Note that the name will change as new versions are released.

Leave the next part of the command as is until you get to the installation directory which in my case is C:\SOPexcel\. You can alter this path as needed to install to the appropriate location.

The other switch I’d like to highlight in the above command is the CT_LANGUAGES. You may change this from English to one of the other supported languages.

A small percentage of people will also wish to install the EPM Add-On. I’ll start with the same command as above to make it easier to see the difference. However, I’ll now add the EPM Add-On option CT_SOP_EPMON=1:

I mentioned earlier that you may need to uninstall previous versions before updating to a newer version of the Excel Add-On. The silent command for this follows:

There is a way to determine if the Add-On is installed currently or not. The command below will return data if the product is installed and nothing if not:

C:\Users\Administrator>wmic product where (CAPTION = “S&OP and EPM Add-In”) get caption

Be careful that the double quote “ doesn’t get changed to this quote ”as the command will not work.

If the process fails, try running the installation in the regular fashion by double clicking it. Doing it that way may give you an error or warning explaining why it’s failing. For example, it may tell you that you have an unsupported version of Excel installed.

Is this command the same for IBP 4?

We are trying this out and our IT lady is running into some issues, here's a quote of her question:

I'm trying to create a silent install of IBP and EPM with the EPM component enabled. 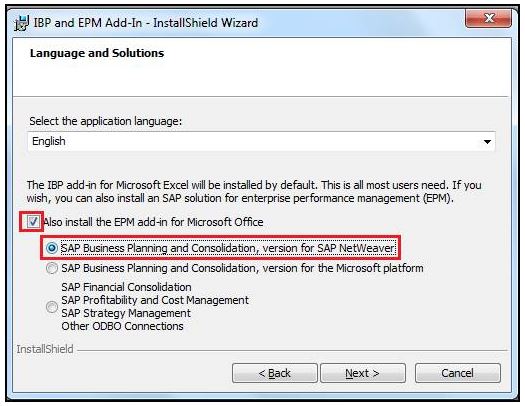 What needs to be added to select the option “SAP Business Planning and Consolidation, version for SAP Netweaver”?

CT_PROFILE= the EPM Solution you require. Enter one of the following applications:

So in your case it should be CT_PROFILE=BPCNW