The defending Champions have stumbled out of the gate of the Indian Premier Twenty20 tournament, dropping their first two matches and struggling in the crease during their innings. The Royals Challengers easily overhauled the Mumbai target even without their star all-rounder Chris Gayle. After loading match data into SAP HANA we can produce near instant visualizations of the action on the cricket pitch in SAP Lumira.

Besides a match high 18 runs in the 6th over, the Indians really struggled at times during their innings and especially stuttered down the stretch scoring only 3 runs in a two over span to finish with a very passable target of 115 runs. Reigning Orange Capper Michael Hussey failed to get going once again as he was caught and bowled in the 4th over after scoring only 16 runs on 15 balls. With SAP Lumira we can quickly visualize the match’s score in a Manhattan chart.

The production from a proficient partnership nearly double-handedly propelled the Royal Challengers in their overhaul of Mumbai’s target. Both Parthiv Patel and AB de Villiers were unbeaten in a partnership that scored 102 runs off of 93 balls for strike rates of 126.66 and 93.75 respectively. Using SAP Lumira we can quickly chart the destructive duo’s run scoring ball by ball.

Bangalore’s bowlers repeatedly confused Mumbai’s batsmen in Dubai and took nine wickets, notched 40 dots and limited the Indians to only eight fours and not a single six. RCB’s right-handed medium bowler, Ashok Dinda, conceded only 14 runs in 4 overs for an impressive economy of 3.50. With a few clicks in SAP Lumira we can create a pie chart with depth to visualize the efficiency of RCB’s bowlers. 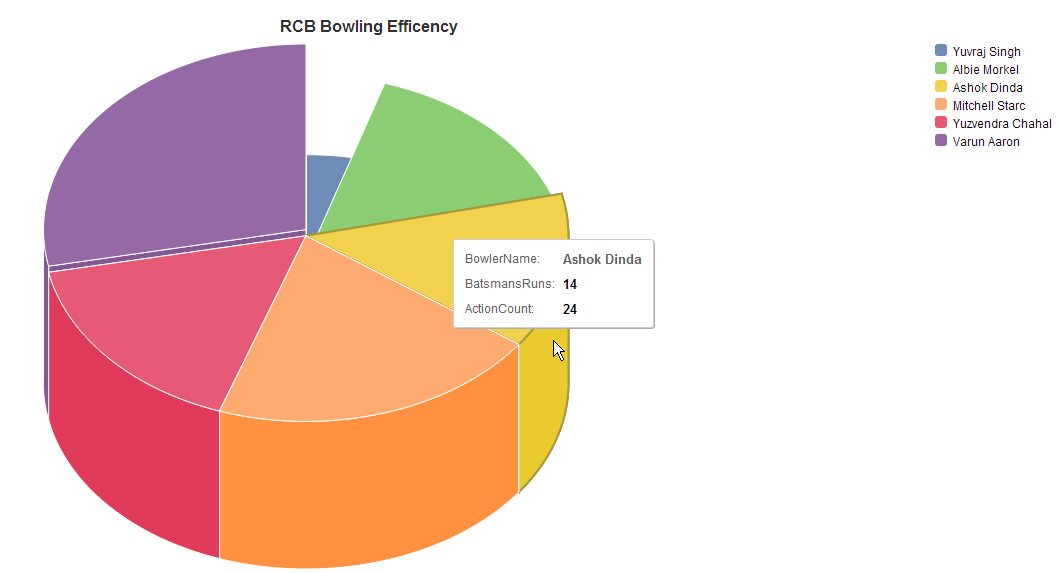