Fresh off their first Indian Premier Twenty20 tournament win in seven matches the Delhi Daredevils will clash with a Chennai side seeking their first points in Abu Dhabi. The Super Kings bowlers failed to protect their 205 run mark in their opening match and hope to improve their attack against a confident Delhi. With the blazing speed of SAP HANA we can quickly visualize historical data in SAP Lumira to gain insights about tonight contest.

Last year on April 18th the Super Kings smashed their way to a 169 run target and then stifled Delhi with their fierce attack to take all ten wickets and hold the Daredevils to only 83 runs. With SAP Lumira we can create a Manhattan chart depicting Chennai’s thumping of Delhi last April.

Michael Hussey and MS Dhoni combined for 109 runs on 73 balls with the former batting throughout the entire innings. Dhoni’s five fours contributed to an incredible strike rate of 191.30. Using SAP Lumira we can chart the Chennai pair’s potent innings.

The Super King bowlers smothered the Daredevils by scalping every batsmen and even took two wickets via leg before wicket. Mohit Sharma bowled three brilliant overs taking three wickets and only allowing 10 runs for a minuscule economy of 3.33. With Lumira we can create a pie chart of the percentage of runs each Super Kings bowler conceded and add a depth to it of the number of balls they bowled to showcase a bowler’s efficiency. 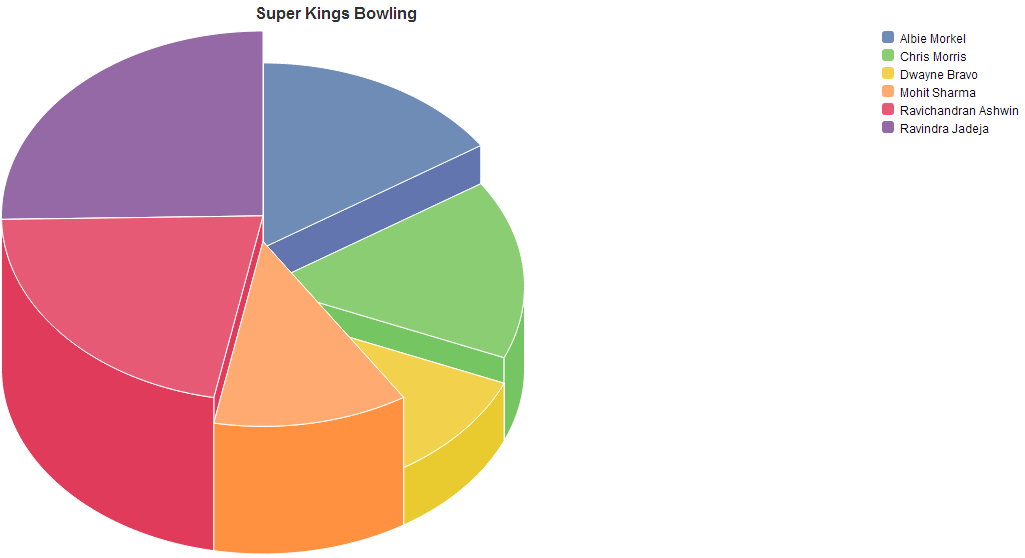 Chennai again set too lofty of a target for the Daredevils when the sides meet for a second time last season at MA Chidambaram Stadium. Four times Chennai scored 14 or more runs in a over while Delhi was only able to once reach 14 runs in an over and eventually couldn’t even come close to topping the Super Kings 8.4 runs per over rate. Check out the match’s Manhattan chart built in SAP Lumira.

The Super King batsmen breezily combatted Delhi’s attack in the match by consistently hitting singles and periodically exploding for sets of boundaries. With SAP Lumira we can plot the run production ball by ball of Chennai’s entire lineup.

Over the past two tournaments Chennai has won four out the five meetings with Delhi including an 86 run thumping in the 2012 Qualifying match. The Super Kings have routinely showcased their power against the Daredevil bowlers and have batted nearly three times as many fours in the previous five meetings. With a few simple clicks in SAP Lumira we can quickly show the total number of fours and sixes each side have struck in their clashes over the last two tournaments.

Will Chennai again power past Delhi?