After dropping their first match on Wednesday the defending Champions face a formidable Royal Challengers side Saturday afternoon in Dubai. Looking to shake their rust off the Indians’ bowlers must be on top of their form or they could quickly be victimized by Bangalore’s destructive top order. Using an online connection to SAP HANA we can gain insights about the 5th match of the tournament by visualizing historical Indian Twenty20 data in SAP Lumira.

In an exciting 2nd match of the 2013 tournament RCB protected their 156 target with two stifling overs to keep Mumbai at bay and secure two points with a two run victory. Check out the Manhattan chart that was easily created in SAP Lumira to see just how close the Indians were to leaving Bangalore with two points.

Chris Gayle’s 92 no out was instrumental in Bangalore’s two run win. Only the combined effort of all of Mumbai’s batsmen were able to match Gayle’s 5 sixes and 11 fours. With SAP Lumira we can track Gayle’s run production from the first ball of the innings until he struck the 120th ball of the innings over the boundary to emphatically end the RCB’s innings.

Mumbai redeemed themselves a few weeks later at Wankhede Stadium setting a lofty target of 195 runs in the first innings. Then their bowlers took seven wickets during their attack and allowed only one Royal Challenger to reach even a quarter of a century, and only 26 runs at that. Check out the Manhattan chart of Mumbai’s 58 run thrashing of Bangalore on April 27th.

Mumbai’s bowlers neutralized the potent Bangalore lineup and the right-handed medium speed bowler, Dhawai Kulkarni, allowed only 19 runs for a match-best economy of 4.75. Kulkarni also took three consecutive wickets via catches. With SAP Lumira we can quickly visualize the percentage of team runs Mumbai’s bowlers conceded in the match and the amount of balls and extras they bowled to best depict each bowler’s effectiveness. 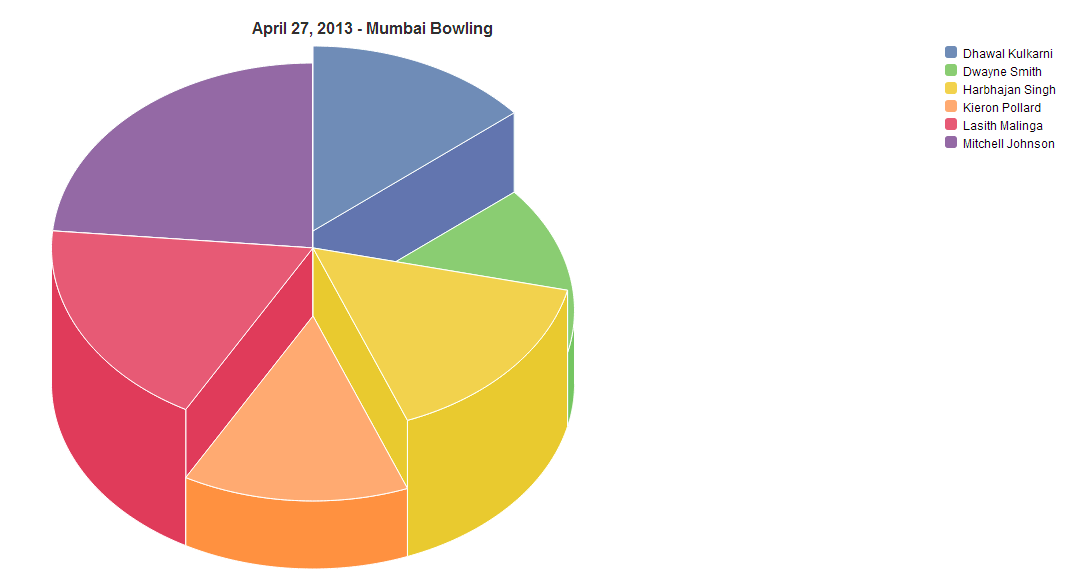 Keep your eyes peeled for more visualizations created in SAP Lumira using historical Indian Twenty20 data from SAP HANA. Please check back regularly during the season for more insights about the daily action.