Who’s ready for some playoff hockey!?! The Quest for the Cup begins Wednesday April 16. Using SAP Lumira, the SAP data viz team has pulled the latest hockey stats to analyze and visualize the 16 team playoff series. Here is our analysis of the first round match-ups and based on the data; which teams will move on. 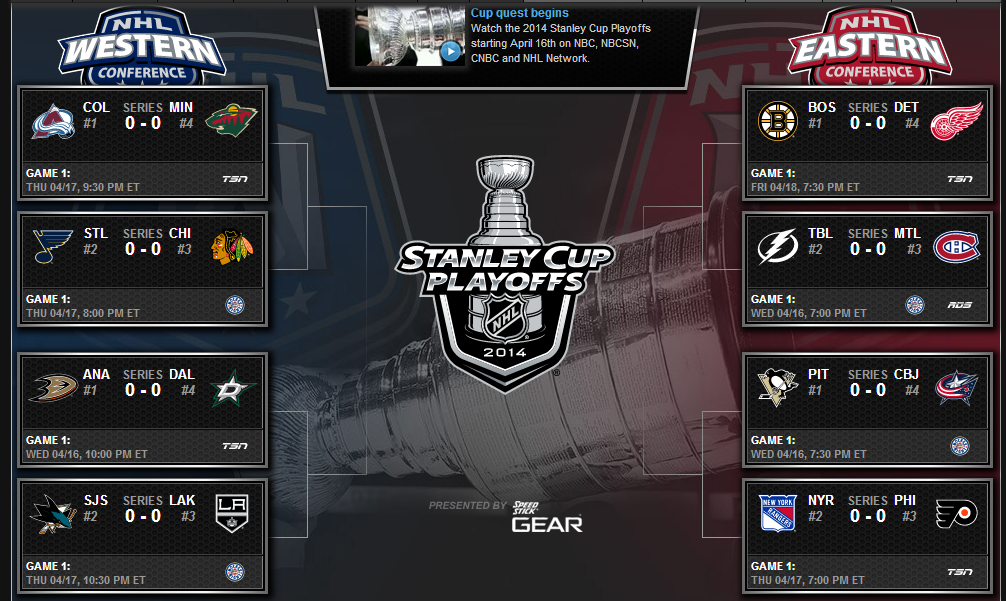 Colorado will mostly be without their best forward, Matt Duchene, in the first round of the playoffs. However, even without Duchene for the latter part of the season, the Avalanche just continued to win games and snatched first place in the Central division. The Wild had a great start to the season due to the amazing play of their goalies, Josh Harding. However, with Harding sidelined with an injury, the Wild must rely on Ilya Bryzgalov. Since leaving Phoenix, Bryzgalov has been less than stellar in recent years. However, Bryzgalov has been amazing since joining the Wild, posting a 7-1-3 record with 3 shutouts.

This will be an interesting series if Bryzgalov can continue his stellar play. With Matt Duchene most likely out for the first round, the Wild forwards match up evenly against the Avalanche’s. However, the edge still goes to Colorado because of their goalie, Semyon Varlamov. Varlamov is most likely going to be a Vezina finalist and has been a huge factor in Colorado’s success this season. Even if Bryzgalov can continue his amazing play into the post season, Varlamov will still out duel him. Colorado in 6. 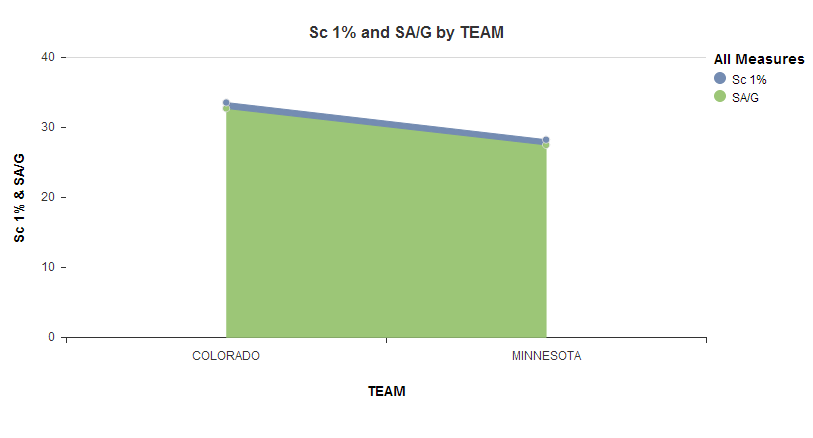 Chicago and St.Louis are both one of the West’s best. Chicago is one of the league’s least penalized teams while St.Louis is one of the highest. With Toews and Kane back in Chicago’s lineup, they will capitalize on their power play chances. St Louis will need to rely on their strong special teams if they want to get past the Blackhawks.

St.Louis has been a dominate team for the past three years, but never had a true number one goalie. St.Louis tried to fill that void with the acquisition of Ryan Miller. Miller was once touted as one of NHL’s elite goaltenders, but has tailed off in recent years. Could Miller be the missing piece St.Louis has been missing for the last couple of years to push them over the top? Patrick Kane is coming off a “lower body” injury and hasn’t played a game since March 19th. Kane had a sizzling start to the season, but had cooled off in the new year, posting only 16 points in 27 games in the new year. The Hawks will need a healthy Kane to surpass the Blues.

St.Louis has been a dominant team for most of the year, but has lost 6 in a row heading into the playoffs. You want to be playing your best hockey heading into the playoffs, not your worst. Ryan Miller has also not met expectations and a shaky Miller could be a huge problem facing a high powered Chicago team with both Toews and Kane back in the line-up. Hawks in 6. 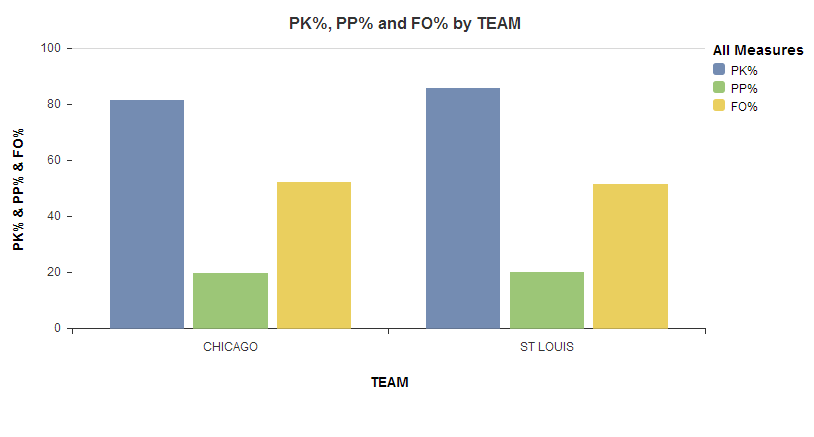 This series should be an offensive battle; the edge in this series goes to Anaheim with a better power play and offensive forwards. 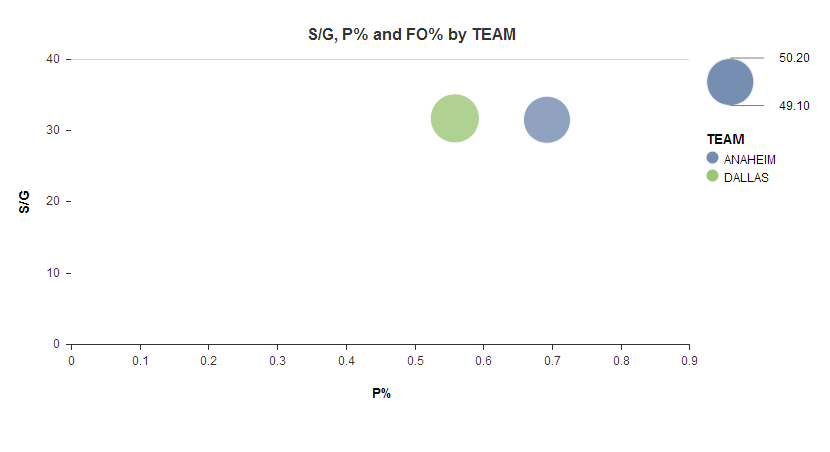 The battle of California is yet another close one.  The sharks have more offensive power than the King by a wide margin, but don’t let that fool you because judging by Corsi%, OZFO% and DZFO%, the Kings are the much better offensive possession team. They spend a majority of their possession in the offensive zone, but just can’t seem to score many goals.

The “X-Factor” for the Sharks is Joe Pavelski. Pavelski is having a career year with 41 goals, third in the NHL, and 79 points. The Sharks top offensive players, Marleau and Thorton have been criticized for the Shark’s lack of playoff success in the past due to their inability to “step up” during the big games. Could Pavelski carry on his amazing play into the playoffs and spark the Sharks to conquer the Kings? The success of Kings will once again come down to Jonathan Quick. Quick is one of the best, if not the best, goalies in the world. In the last two years, his playoff numbers are an astounding 1.66 GAA and a .940 SV%. Quick has carried the Kings to a cup once already, can he do it again?

Sharks nose past the Kings in seven games. 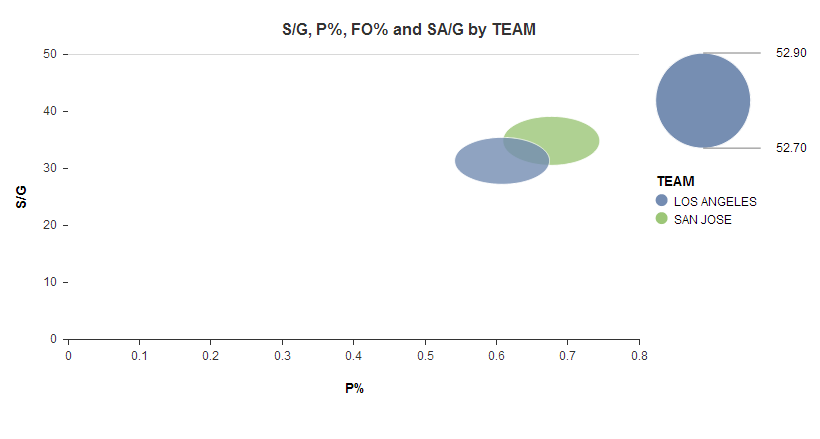 Bruins are looking strong on all fronts to take the first round over the Red Wings. Boston moves on.

Don’t let Tampa’s season record of 3-0-1 against Montreal fool you. This matchup will be one of the closest matchups in the first round. Three of the four games during the regular season were settled by overtime or a shootout. Montreal has the upper hand in special teams with their superb penalty kill, but Tampa is the better even strength team.

The Lightning will be without their starting goalie, Ben Bishop, for their first game. It is still unclear whether he will be back in this series at all. Bishop is having a career year and has been a wall for the Lightning. Can Anders Lindback step up and steer the Lightning into the next round? The Canadiens are a one line team at the moment. The first line of Pacioretty-Desharnais-Vanek has been lights out down the stretch.  You can expect the Lightning to focus on shutting down this line, thus the other players on the Canadiens will need to step up their game. Will Montreal have enough offensive depth to push them pass the Lightning?

If Bishop only misses the first game of this series, I like the Lightning’s chances ofbeating the Canadiens. However, no one knows when Bishop will be back and Anders Lindback has not had a good season. If Bishop is indeed out for most of the series, Montreal will win this series and face the Bruins in the second round. Montreal in 7. 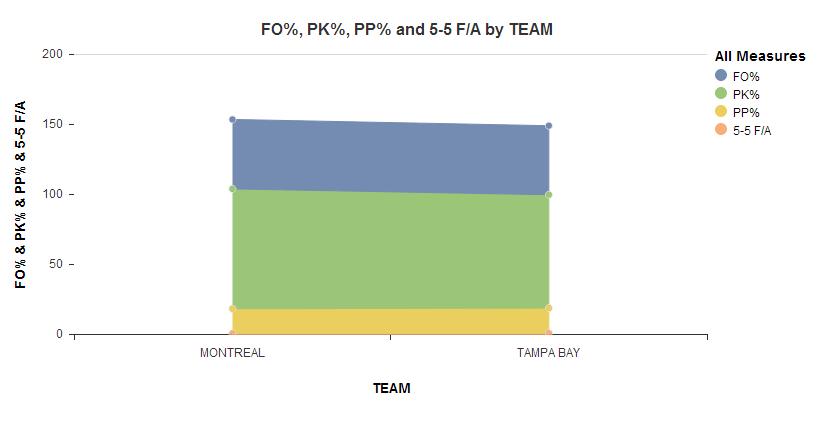 Many analysts have Columbus beating Pittsburgh; based on the data we can’t see this happening in a seven game series. Pens take this series. 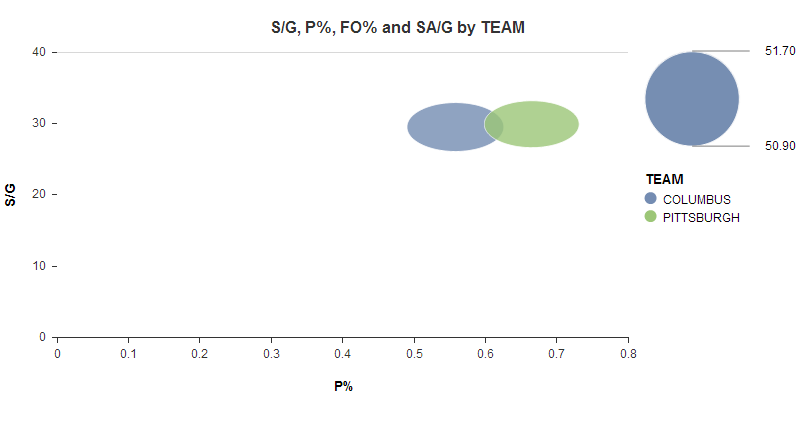 On paper, this is a very even matchup. According to the stats, you could even give the edge to the Rangers. They have a better G/G to GA/G ratio and tend to have more possession time in the offensive zone than the Flyers according to the Corsi% and OZFO%.  If the Flyers want to win this series, they need to rely heavily on special teams. They have the most PK time/game in the league, so their penalty kill will need to be sharp along with their goaltender Steve Mason.

The “X-Factor” for the Rangers is definitely Henrik Lundquist. The Rangers goalie has carried his team for countless years and is once again one of the top goalies in the league this season. In the playoffs, the furthest Lundquist has carried the rangers is to the eastern conference finals, where they lost to the devils, in 2012. On the other side, the success of the Flyers will most likely come down to their captain, Claude Giroux. Giroux has been one of the best players in the NHL after a slow start where he only tallied 7 points in 15 games. Giroux ended the year third in NHL scoring with 86 pts in 82 games and has a career 55 points in 50 games in the playoffs.

On paper the Rangers are the favourite to win this series, but every year the Rangers rely heavily on Lundquist. Most of their wins are from low scoring games and their lack of their playoff success has been due to the lack of offense. The Rangers have failed to address their issue of goal scoring yet again and I do not see them getting pass a high powered Flyers team lead by Claude Giroux. 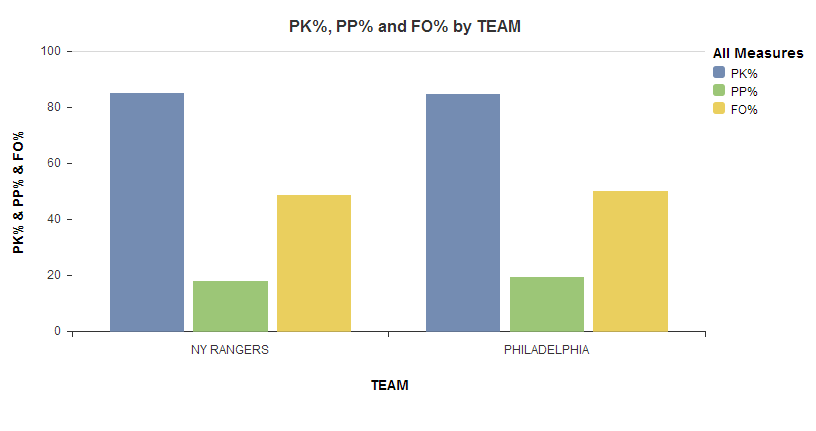 *Disclaimer: this analysis and predictions are an attempt to showcase SAP technology not accurately predict sport outcomes.

Think you know which teams will survive this year’s playoffs and make it to the finals? Try out SAP Lumira and share your insights and
predictions via SAP Lumira Cloud.

Here’s how you can join in on the action: