The purpose of this document is to explain the role import features in GRC 10 and to discuss about all prerequisites for role import to avoid any issues. In this document import of composite roles was discussed rather than single roles. 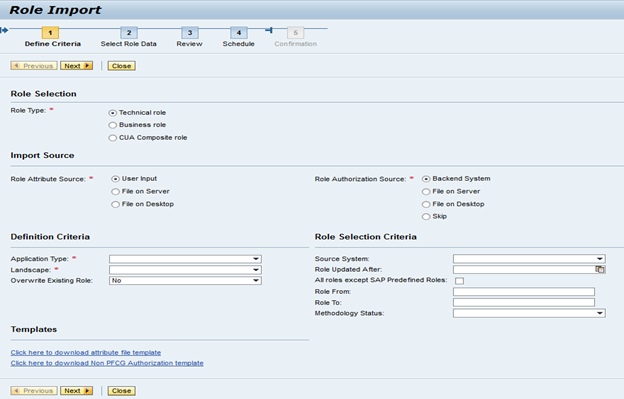 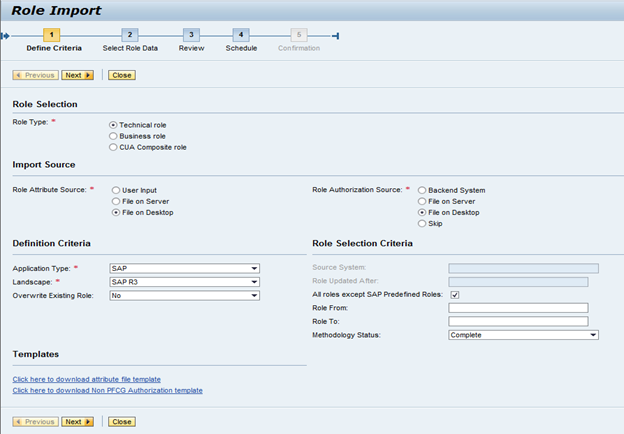 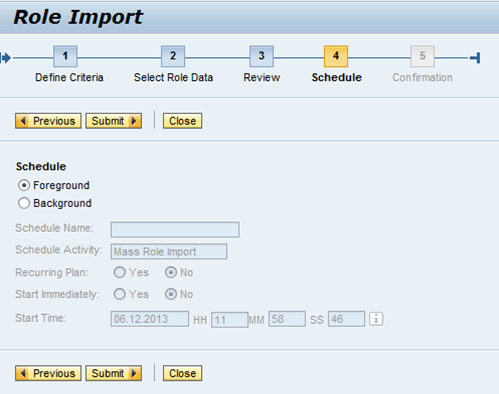 In GRC10, we have these possible scenarios:

To improve this document further with different issues caused during role import, please share if you have any details so that it would be easy for the people who are searching for help on this topic

What are the Prerequisite of role Import?

This document has a clear heading under which prerequisites are clearly discussed. Please check it out.

Very nice document. Just one observation: in our SP12 system we had to reconfigure to change PRD to PRO , then reimport to change the corresponding attribute for all the production roles in order to get roles to come into the request when using Copy Request functionality. It was quite a bit of work to do in all three tiers but that was the solution offered by AGS.

Another tip concerning role imports: if it errors on any role, sometimes you will get an explanation as to the cause of the error, and other times there is no explanation at all and you just have figure out what you did wrong.

Possibly you could add:

Tiny critique (sorry but it's he pedantic in me)... try using a solid square to block out sensitive information instead of the red squiggles (if using MS Paint for your screenshots it's easier to do)

Thank you so much for your valuables inputs and suggestions. I have included the topics highlighted by you in the same document.

Great to see you producing this material!

I am NOT using BRM. to manage roles in my system - Do I still have to import both the files - Role Authorization text file and Role Info text tab delimited file.? I believe importing Role Info file is enough. Your input is very valuable. Please advise.

If you don't want to maintain your roles in BRM, no need to have Role authorization text file and you can skip it. Actually we are also not using BRM 🙂

Thanks a BUNCH! Made my life a little easier. Assigning Business processes; subprocesses and approvers to each role is also a big task.

Once again I appreciate your quick reply,

Is there a way we can make the Business Process and Sub Process NOT mandatory while importing the roles to GRC 10.0 - BRM?

If you were to manually create the role in BRM are you required to complete those fields?

Yes Colleen. They are mandatory while creating role in BRM - BUT, I am not using BRM at the moment. I am using PFCG to maintain roles in the backend. But, for AC to identify the roles, in the target system, i need to upload them in ERM. (Ofocurse you knew that)

The problem is that you are still storing them in the BRM repository so SAP is going to make mandatory. the upload would not know if you use BRM or not

as great as intergration is, this is an example of the downside

Some Generic comments: Some roles are NOT maintained as ACTIVE roles in ERM - (GRC 5.3); and I just wanted to upload the only currently active  ECC roles from ERM to GRC 10 - ECC landscape (BRM).

2. All the Parent roles which are NOT maintained in 5.3 as active roles, MUST be imported to BRM as they might have some child roles, that are ACTIVE. IF you need to upload child role - the PARENT must be uploaded FIRST.

Thanks Ashish for adding in more details which would be very helpful for the people with same issue.

I would need some help. I have imported a role with both Role Atrributes and Role Authorization options. Role import into GRC10 is success. The purpose is just for ARQ and not for BRM. But I need to assign Role Owners since that is going to be the approver in the ARQ workflow. Somehow, I am unable to assign the Role owner to a role when I go to Role Maintenance - > Owners/Approvers tab. I see that area is not greyed out but it does not allow me to add an owner. The user is correctly tagged as "Role Owner" in the Role Owner option. Basically the 3 options Add, Remove and Default approvers - all are greyed out.

Any help is appreciated.

Sorry for the late reply. If you are not using BRM, you just need toimport one file. Do you import role as Complete and in PRD status? You can assign approvers in the import file itself. If you have already imported the role, you can search for that role and than open it and make modifications to approver.

When ARA runs a risk analysis, does it ALWAYS communicate with the back-end systems to fetch the role contents ?

Meaning .. although you might have decided to go through with the import of the "Role authorization file", would the risk engine ignore the fact that the role content is sitting inside GRC .

My logic is .. not having to communicate with the back-end system would mean a serious time-saver for the risk engine to produce audit results;

thanks for the replies,

Due to the low performance I was convinced GRC fetches constantly..

Now, I have confirmation. Thanks

I am not using BRM. So, i have not uploaded role auth. file . I am only using provisioning  . so, i have uploaded the Composite and  single roles. But when i open the composite role, tab 'Roles' does not show it's single roles. how to show the single roles ?

did you upload the single roles first before you uploaded the composite roles?

I uploaded the single roles first, and then composite role

Nice document. But I have a question.

If any modification is done in composite role like add/remove single roles, then we must re-import the single/composite role in GRC system to be in sync with back end system. Do we have any program that can be run in background every week such that it automatically gets re-imported without manually re-importing it. Thanks.

I have issue while doing role import, can anyone help me out? We have implemented ARM and BRM is not implemented. I'm try to do role import using excel file for ARM roles purpose, while I'm doing I'm getting an error "Correctly define the logical connection in CCITS" does any one has idea?

We have an issue with Role Approvers/Role Owners, we have imported the roles along with approver and alternate approver through the template and the role import is fine as if you search roles in role search through NWBC  i am getting both the approvers, but during request provisioning (when a access request is submitted it shows only one approver and also whether the approver is not there or not maintained, the request is getting failed, can any one help me or guide me on the same.

According to which principle is the business and sub-process assigned?

The composite roles are named after departments. Is there any suggestions on how to choose the processes? Should I take the SAP standard processes or deposit new ones in the SPRO?

I am fairly new to GRC.  We are wanting to continue to maintain our roles via PFCG  but do user provisioning via GRC.  There are several comments in this blog that mention that method but I am not clear on which configuration steps mentioned in this blog actually need to be performed to use our preferred method.

Statements in blog that mention my scenario:

'Role Attribute Source [Note: Role Authorization Source can be skipped if you do not want to maintain authorizations in BRM and just want to use roles for provisioning purposes only]'

'R/3 roles are only synced by the role sync job, and never imported into BRM. We call them backend roles. In this case, the role exists only in table GRACRLCONN. And it can be deleted directly from PFCG, as the role sync will run and capture the deletion, and remove the role from GRACRLCONN table.'

I figured it out.  There are two files, I only need to load the 'Role Attribute Source' and not the other file.

Sorry, the wording was confusing !!