How to use .Net visual controls in PowerBuilder Classic

Using non-visual .Net classes in PowerBuilder Classic is somewhat straightforward.  Provided the assembly (and the classes and methods within it) have been marked as COM Visible, you can run REGASM on them to create OLE registry entries and then use the class through OLE Automation.  I have a video on the SAP D&T Academy that demonstrates the process.

Using Net visual controls takes a bit more work.  There is an add-in for Visual Studio Professional called the Microsoft InteropForms Toolkit that essentially puts an ActiveX wrapper around a .Net visual user object that can contain one or more visual controls.  Some observations:

I have a video on the SAP D&T Academy as well that covers this technique.  This blog post will look at a different sample implementation than the one used in that video and will include the code used.

Note that the code used here was adapted from a CodeProject sample of a stand alone multi-page TIF viewer.  The code was converted from C# to VB.Net and then adapted to function as a single user object with methods rather that a stand alone viewer.

So, the first thing we’re going to do is fire up Visual Studio.Net and create a new VB6 Interop UserControl. 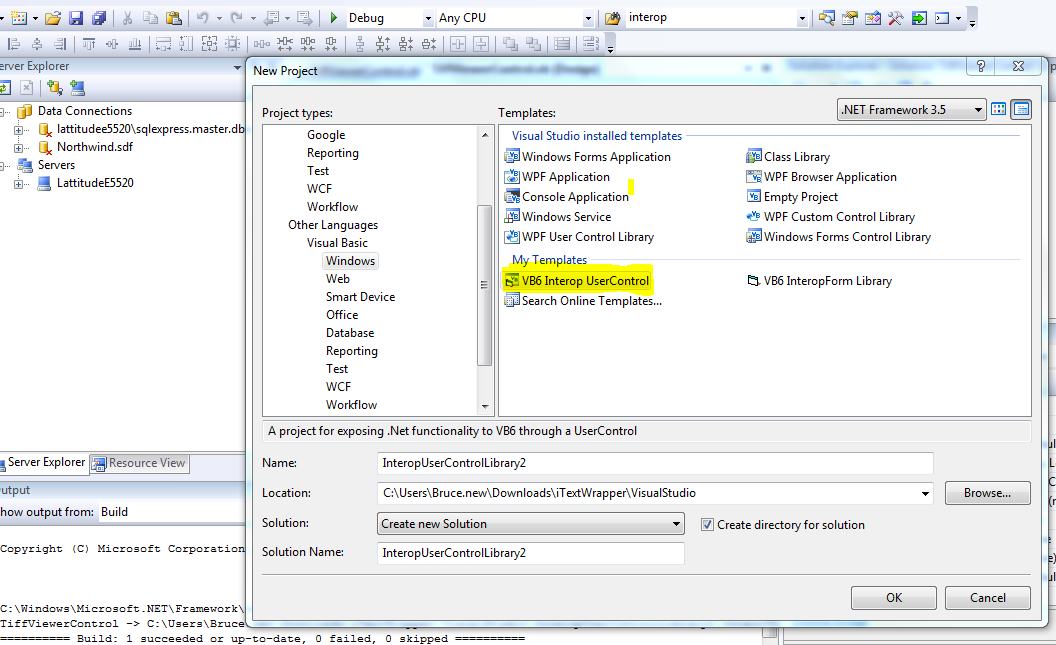 Drag a PictureBox control over from the Toolbox onto the user object in the designer and then set the Dock property of the control to Fill.  Since we’ve only got one control in this user object, this will ensure that the PictureBox will always fill the entire contents of the user control when it’s resized.

In the code editor, we’re now going to declare some instance variables in the user object that we will use to track a few properties we’re interested in the

“VB6 Interop Code” Region, just after the “#If COM_INTEROP_ENABLED Then” declaration.

We want a couple of those to be read only properties as well for the control, so we add those into the “VB6 Properties” Region:

The reason that we’re adding 1 to each of these values before returning it is because the mechanism that tracks the page numbers internal to the control is zero index based (the first page is page 0).  We need to adjust that before displaying it to the user who understands page numbers as one index based.

Finally, we’re going to add some methods into the “VB6 Methods” Region, one of which is internal and the others which we’ll be using from PowerBuilder to interact with the control.

The first method is the internal method that is used to refresh the image in the control when a TIF is first loaded or the user navigates to a different page:

Recreating myImg an _NumPages each time the function is called is perhaps a bit of overkill, but I wasn’t interesting in trying to refactor the code, just convert it for this sample.

The following function is used to pass a filename from PowerBuilder into the control so that the control will read it and display the first page:

This function is used to navigate forward one page in the TIF file:

And finally, this function is used to navigate back one page in the TIF file:

That’s a good start.  The user object could obviously be embellished.  For example, offering methods to navigate to a certain page directly, zoom in and out on the displayed image, print one or more pages of the image, etc. could all be added later.

Once you compile the project, Visual Studio.Net will create the registry entries that make the user object available as an ActiveX control.  Open up PowerBuilder Classic, open a window control and start to insert an OLE Control onto the window.  In the dialog that appears, select the third tab (Insert Control), and then scroll to the name of the control you created in Visual Studio.net.  In my sample, I give it the rather unimaginative name of “TiffViewerControl.TiffViewerControl” 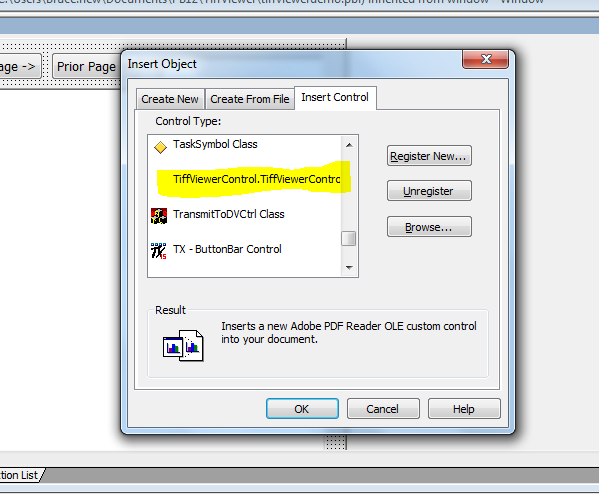 In the PowerBuilder window, I added buttons to open a TIF file and display it in the control, to move forward one page and to move backwards one page.  I also have a static text field that display the current page number and number of pages in the document.

The script in the button that opens a TIF file for display is as follows:

To move forward one page:

To move backwards one page:

The of_displaylocation function called by all three scripts is the one that populates the static text field with the current and total page numbers:

Finally, I have some code in the resize event of the window so that the user object resizes when the window is resized.

With that, we’re done.  Run the app, load up a TIF file and start browsing through it.  For this sample, I converted the 142 page PowerBuilder ORCA manual from PDF to TIF. 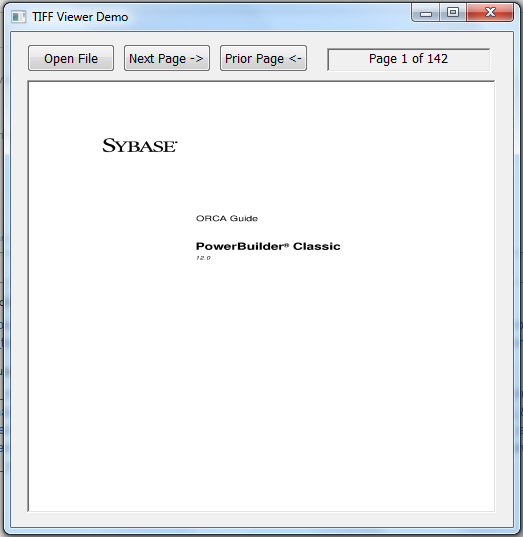 The sample code, both for Visual Studio.Net and for PowerBuilder 12.5 Classic, is available on my Google Drive.

Good afternoon from peru, please can you upload the sample code again?. the link from google drive is gone.

I updated the link.  I moved it into my PowerBuilder Samples folder with the other samples.  Look for TiffViewerDemo.zip.

I have registered the Interop DLL as a .Net Assembly, but it still doesn't work. I can't register it using regsvr32.

Is there another way to register these DLLs or have I missed something?

What do you mean by "registered the Interop DLL as a .Net assembly"?  Did you add it to the GAC?  Did you run REGASM on it?

We tried to do something like this 2 years ago, but we were plagued with crashing. See this thread PowerBuilder 12.5.2 app crashing often (the last post in particular). I'm interested to hear your thoughts on this issue we've had, or if you've encountered anything similar.

I'm afraid of ever trying .NET controls and Interop again (once bitten, twice shy) but it would be sooooo useful if it was stable.

There's not much to go on in that thread.  You indicated it was a custom COM component, but didn't mention if it was based on the Forms Interop Toolkit or something else.  You're also getting a .Net exception, which means it might be an issue in the code within the component.

In any event, I haven't experienced anything like that.

Who created the component?  Are they aware of the issue?  Have they given any feedback?

I created the COM component using the Forms Interop Toolkit.

I wrote a powerbuilder script that would open a window with the custom COM (using the third party .NET control) on it, load a image (like your example), and close the window. This is where I was able to really see the exceptions/crashing pop up.

Thanks for the reply, do you have success using this technique production (stability wise)?