With the 2014 Indian Premier Twenty20 tournament starting in less than a week the attention of the Cricket world will soon be focused on the grounds in the UAE and India. Let’s continue to preview the 7th annual tournament by analyzing SAP Lumira visualizations of bowling data from last year’s tournament. The sheer speed of SAP HANA enables us to quickly build these insight-laden graphics.

By simply filtering the dismissal type for no outs and run outs we can graph the top wicket-takers from last year’s tournament. The 32 wickets Chennai’s Dwayne Bravo took earned the Trinidadian all-rounder the Purple Cap as the tournament’s top wicket-taker. Check out the totals for the rest of the top six wicket-takers.

Selecting the dismissal type dimension for legend color slices up the bars to show how each of the top wicket-takers earned their wickets. Rajasthan’s James Faulkner broke eight wickets bowling throughout the season, the highest total of the top six wicket-takers.

The Australian fast bowler was tied for the league led in wickets bowled with Hyderabad’s Dale Steyn. The South African, Steyn, twice delivered balls in excess of 150 KM/H during the 2013 tournament. Check out the number of bowled wickets for each bowler last season. 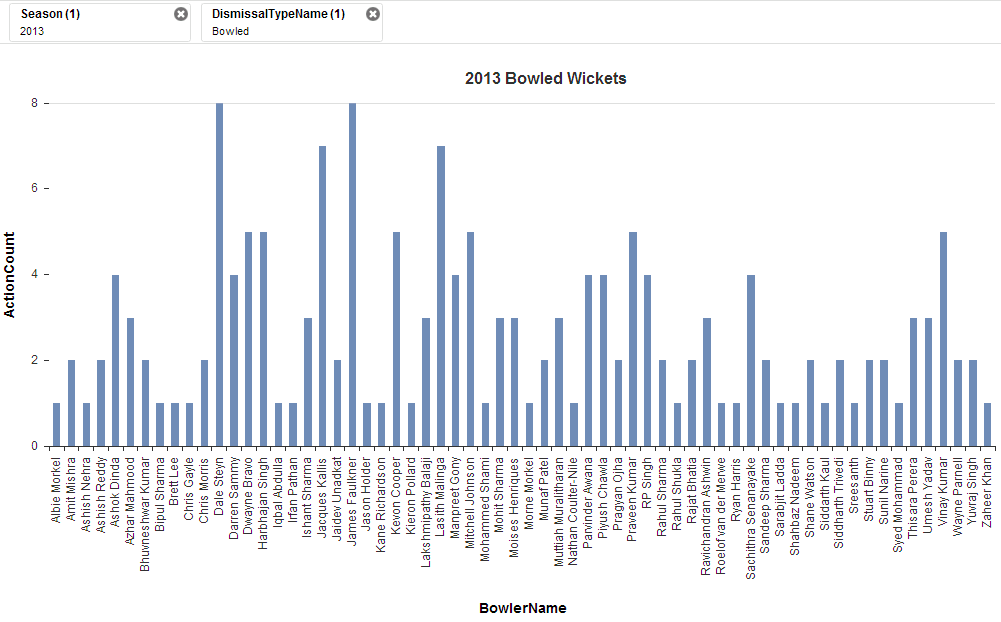 By converting our 2013 Top Six Wicket-Takers By Dismissal Type visualization to a pie chart and trellising it out by bowler name we quickly discover that all of the top six wicket-takers earned a majority of their wickets through catches. Kolkata’s Sunil Narine had the most diverse dismissals of the top six, inducing more leg before wickets (3) dismissals than bowled dismissals (2).

Next, by slicing our top six wicket-takers by bowling type we see that each bowler took their wickets using a single bowling type. Bravo and Johnson were fast seem bowlers, Faulkner and Kumar utilized a medium seam, whilst Singh and Narine relied on off spin.

To gain further insights we can switch our visualization to an area chart and swap bowling type for bowling delivery. Quickly a correlation between the effectiveness of fast and medium seam bowlers to take wickets using no movement on their ball becomes apparent. Meanwhile, the two off spin bowlers didn’t take a single wicket using a no movement ball but rather took a vast majority of their wickets with off break balls.

Which bowling style do you believe is the most effective for taking wickets?

Keep your eyes peeled for more visualizations created in SAP Lumira using historical Indian Twenty20 data from SAP HANA in anticipation of the 2014 season. Please check back regularly during the season for more insights about the action on the pitch.