From the Archives: Using regular expressions with SQL Anywhere

In this post, originally written by Glenn Paulley and posted to sybase.com in June of 2009, Glenn discusses how regular expressions can be used within queries in SQL Anywhere.

The SIMILAR TO predicate is part of the 2008 ANSI/ISO SQL standard. However, the draft of the next SQL standard, due in the 2011 timeframe, is currently under development – in fact, a WG3 editing meeting is underway in Korea this week – and SIMILAR TO will likely be eliminated from subsequent versions of the SQL standard as its functionality is being replaced by the REGEXP_LIKE predicate (see below).

The syntax of the SIMILAR TO predicate is straightforward:

but as usual the devil is in the details. For starters, here’s an example, using the SQL Anywhere demo database: 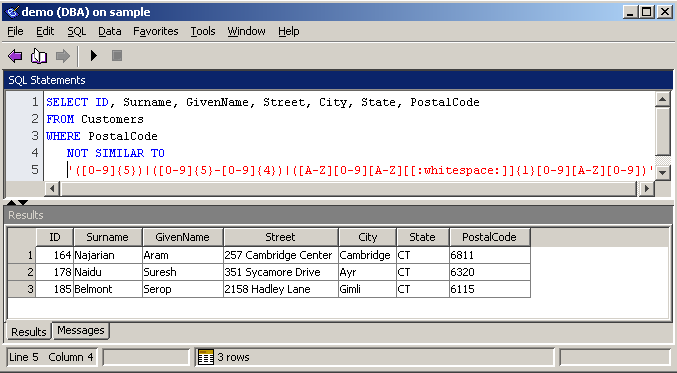 With the SQL Anywhere 11.0.1 release, the REGEXP predicate supports regular expression patterns in a manner similar to Perl and other UNIX-based tools that support regular expression searching. Once again, the syntax is straightforward:

In the SQL Standard, the syntax is virtually identical except that the predicate uses the keyword LIKE_REGEXP. Supported patterns are those from the XQuery portion of the standard. In SQL Anywhere, we’ve adopted pattern syntax from a variety of sources, primarily Perl. REGEXP does not use collation-based matching; matching is based on code point values in the database character set. For example, the comparison X REGEXP '[A-C]', for the single character X, is equivalent to CAST(X AS BINARY) >= CAST(A AS BINARY) AND CAST(X AS BINARY).REGEXP supports the common meta-characters and sub-classes familiar to programmers, and also supports special escaped characters such as “\s” for a space, or “\r” for carriage return, and look-ahead and look-behind assertions. Here is the same example for validating postal codes, but this time using REGEXP:

Finally, note that the SQL Anywhere query optimizer will automatically optimize REGEXP and SIMILAR TO predicates – as it does for LIKE predicates – to be used as sargable predicates for index scans, depending on the specific pattern.