The environment in which the present subject is being discussed is that, where Large Machine installations like Furnaces, Cranes etc have been mapped as Functional Locations and the Equipments hierarchy follows under them.

Everything was OK until we see the Equipments in isolation.  It did not take longer for the Audit persons to reach the Logic that in an Enterprise Structure, if an Equipment undergoes breakdown, the Functional Location also goes inoperative. M2 Notifications are recorded on the Equipments but its effect impacts the hierarchy, finally affecting the bigger machine i.e., the Functional Location in our case.

The Audit demand was that the Equipment Availability figures be made available at the Functional Locations level, even when no direct M2 notifications are created on them.

Naturally, we approached OSS. The recommendation was in the form of implementing an SAP note namely 1074845, but with conditions like no further software support would be provided in relation to this. This is relevant to Functional Location-Equipment Hierarchy only, not to Equipment-Equipment Hierarchy. Meaning that, the MTTR, MTBR vales will be collected to Functional Locations only, but not to Superior-Ord Equipments.

So the objective of this document is to compute Nodal Equipment Availability on Functional Locations as explained above.

Readers might by now have understood that by implementing the said SAP note, SAP will be providing the collective MTTR, MTBR values on the Functional Locations. Using these values our requirement of Calculating the Availability values can be easily done through formula given above.

Steps suggested in SAP note 1074845 were implemented by BASIS people.

We manually checked the correctness of the collective values of MTTR, MTBR on the Functional Location through MCJC, by deriving from the individual Equipment values of MCJB. We confirmed that the things are accurate.

Here I want to share one information with the readers. Few might be wondering that this requirement can be well addressed by a simple development. Even I too tried this. Such development would be very complex because, taking care of Breakdown Duration Overlaps of Equipments under a Functional Location would be very complicated and so a less reliable code would be an outcome if developed locally. The same thing comes from Standard through this SAP-note in an accurate way.

While testing we realized that the info-structure S070 (responsible for MCJC report) updates monthly (OMOS setting). So, to suit our requirement, we developed a simple program to update S070 (Calling Tcodes OLPM and OLIX in the code) and scheduled it to run daily (Initially we were updating 12Hrly but later modified for Daily updating).

Step4 (Develop a program to compute the Equipment Availability) 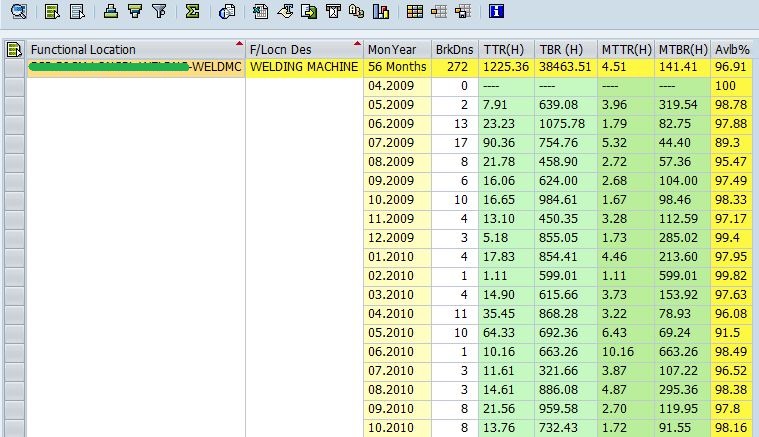 This is to reiterate that SAP did not give any solutions to compute similar calculations on SuperiorOrd Equipments in relation to the sub-equipments. Also, these collective computations are valid on the immediate Functional Locations above the Equipment hierarchy. So starting with the Equipments which need these collective MTTR/MTBR computations, we had to  modify our structures to suit the present situation .

(Hoping that Readers will be able to distinguish the use of word Equipment in this article, sometimes it meant as an SAP object and at other it has general Equipment meaning)

…and I feel here too it is important for me to mention the version of my system where all these exercises were to be done. It is ECC6.0 no EHPs.

Your comments always motivate me 🙂

Thank you very much Sir,

I can not forget that my initial posts received your appreciations, though which the foundations for further posts laid. When you say helpful it must be really helping.

Thank you very much for your input. I searched for note 1074845 and it is not released and I do not have access to it. How can we access it?

I have oss credentials. In oss when I try to show this note the system says "This not is not released'. Can you post the note wording?

This note has been given only based on specific OSS message & also SAP will not provide any support on that note.

So SAP didn't release that note for partners & customers.

You should contact SAP through OSS if you desire to have this feature and follow recommendations. However, attaching the Screen-shot.

I want to Know, S070 infostructure update automatically or we need to run the job using OLPM & OLIX with creating version & copying on "000".

When does such updation info structure stops?