Last month I was invited to attend an SAP media event focusing on a few of their new partnerships during the Sony Open.  My day started with attending a panel discussion & concluded with getting into technology details.

The panel included the following individuals: 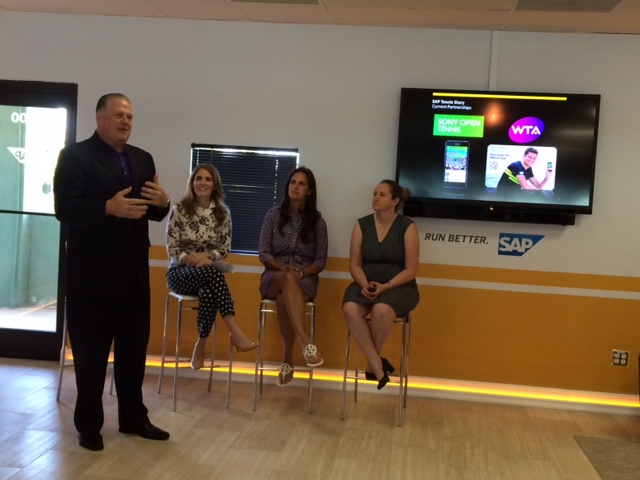 Steve Peck started out the panel discussion talking about the partnership with the WTA and how SAP Analytics will change the sport of tennis for the players, coaches, fans and media like never before.  SAP’s tennis strategy, has 3 parts, Tournaments (i.e Sony Open), the WTA as well as SAP Ambassadors such as Milos Raonic.  He also talked about the other sports partnerships like the NBA.  He told us that they verify with the players union on what statistical information can be shared as it could affect contract negotiations.

Jenni Lewis (the main innovator behind the mobile app and analytics solution) discussed how the technology is used and gave a demo of the mobile app (much more on this later on in the blog).  Jenni spoke about how SAP Analytics provides a way to drill deeper into the patterns of play such as server direction and where the player is standing.  The coaches can now drill down on a “ball” and find out all the stats like which point, ball speed, did she win this point, etc.  She mentioned that they have worked with focus groups with players and coaches to ensure they are covering all of the touch points.  They will soon be doing the same thing with fan’s to see what they want included in the mobile app.  The players and coaches are already using this technology.

For example, Serena Williams coach, Patrick Mouratoglou, stopped by to chat with Jenni. 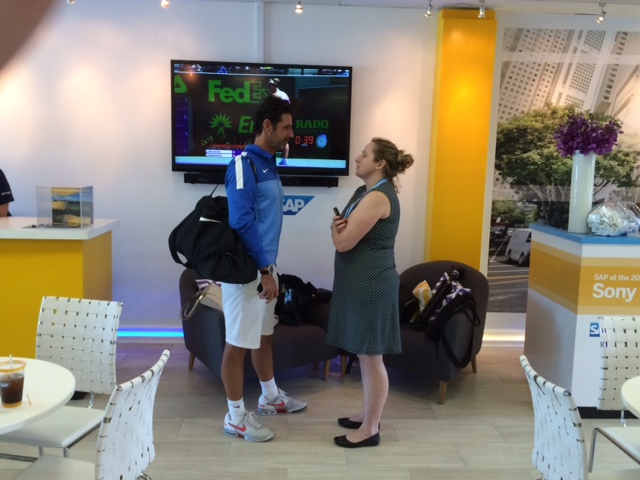 Mary Joe had this to say:

“As a tennis broadcaster, SAP’s Analytics and insights allow me to tell a more informed story, helping viewers understand what is happening on court and why.”

“As a past player and current Fed Cup Captain, the level of detail SAP Analytics provide will make a huge difference to how coaches analyze a player’s game.” Above are Mary Joe and Jenni discussing the information that can be gained from the ball placement statistics.

I was lucky to get some of Jenni Lewis’s time to discuss the technology in more detail.  Prior to this new technology, the statistics were not often tracked on how a player is performing during a tournament and coaches had to manually track this information.  It is now available for them in near real-time.

2)  The 10 Hawk-Eye cameras positioned around the stadium

Here is how it works:

PLAYERS:  use the heat map to study ball placement.  This uses SAP Predictive Analytics to show where the player is most successful.

BROADCASTERS: such as Mary Joe Fernandez, use the heat map to describe a match. 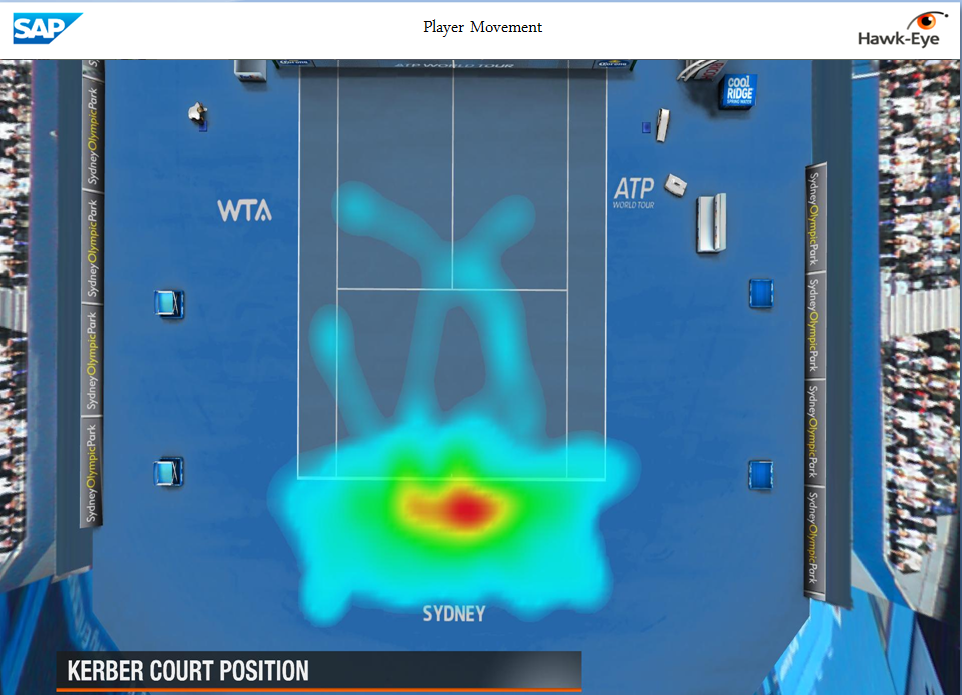 Live Virtual Replay of every point

It was amazing to have this information at my fingertips!  It truly enhanced my experience watching the match. 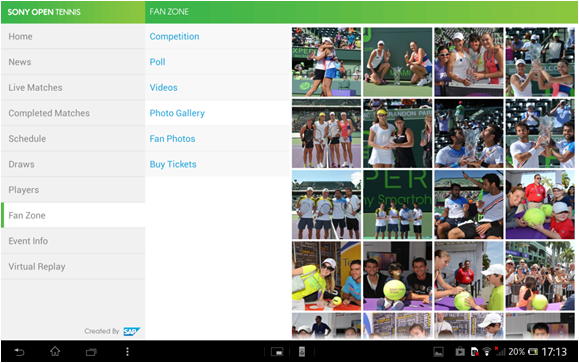 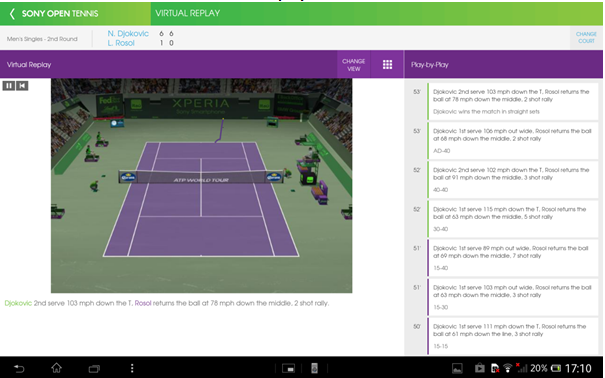 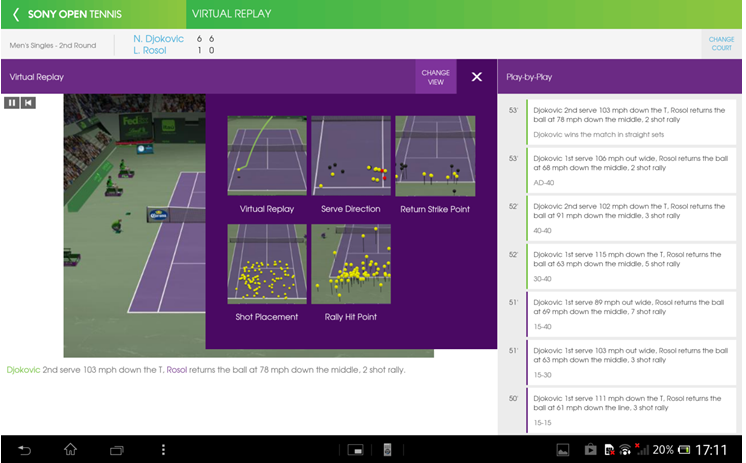 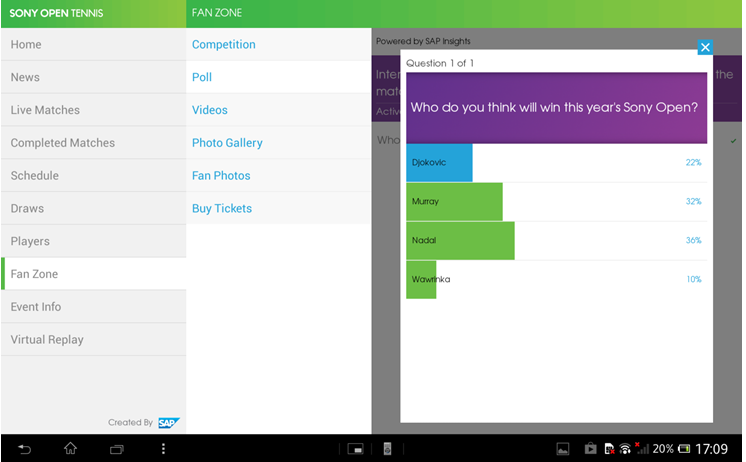 I am very excited to see what features will be enhanced/developed by SAP … especially for the WTA Championship Tournament at the end of the year in Singapore!  It was amazing to learn about how technology is used to process the statistics.  Oh, and I was also very fortunate to see some great tennis!

Previous blogs on this topic are:

Very nice...especially using Data Services - I am sure Ina Felsheim would be interested too

Thanks Tammy - it is very interesting that this was all done with standard SAP Solutions (with the exception of the Java app needed to process the data from the umpire's tablet).

Great use cases. Love the use of Data Services and Data Quality for better analytics!

Thanks Ina - this is a much more interesting use case than financials or sales (in my opinion) 🙂 .