Cloud for Financials (‘Deceased’), Smart Financials and the next generation of Cloud ERP offering: Stepping stones?

I recently read Tammy Powlas’ informative blog series on Smart Financials  (part 1, part 2) and was reminded of my promise to further analyze the demise of  the SAP product Cloud for Financials. Although I initially couldn’t figure out how (or if) the two were related, I had a gut feeling that there was some association between the two events.

As I mentioned in a previous blog, ‘Cloud for Financials’ has been pulled from the market and is being re-absorbed into Business ByDesign.

The fact that SAP pulled Cloud for Financials from the market without a public announcement was a missed opportunity. Instead of declaring that the move was part of a broader strategic evolution, I had to discover the change via detective work (not that I didn’t enjoy it ;->).

The motivation behind the creation of a separate product in 2012 is best revealed in blog comments from this period:

There will be a type of customer that will prefer ByDesign over FinOD. The main difference is, do you want one app to run the entire business (unit) or you you want just the financial core that then reaches out into best of breed apps for HR, Sales, Procurement etc.

The financials core of SAP Financials OnDemand, General Ledger, Accounts Payable, Accounts Receivable, etc. is identical to the financials core of SAP Business ByDesign. The main difference is that the financials engine of FinOD does not assume that it’s subledgers are “fed” by other ByD components, but instead can accept input from anywhere in a proscribed format. These well defined feeds are the foundation for integration, to you can have a complete end to end view (Income statement, profitability, etc.) though the inputs could come from attached best-of-breed components, such as HR, CRM and Procurement. n that way FinOD can function as a financial hub.

Thus, one of the most important initial motivations for Cloud for Financials involved its role as a financial hub that included “best-of-breed” products that were possibly originated from non-SAP sources. Now, after approximately 2 years, something has changed and Cloud for Financials has been re-merged into ByDesign.  Comments on my blog provide some insight into what has changed since the product’s release.

Recall that Cloud for Financials was dervied from ByD by splitting the code into two separate lines. However, having two separate products and development teams was inefficient and more importantly for our customers, enhancements made to the products were difficult to synch across the two code lines. So we decided to merge (re-merge?) the two products so that Cloud for Financials once again became the Financials business area of Business ByDesign. – Jim Daddario

It helps to speed up the process. But if you converge to one platform, you better have your “code” together to simplify. – Sven Denecken

The split was done to bring HANA w/o disruption in the installed base, now we have brought the 2SKUS back together – Chris Horak

Although there are technical (support of two products, etc) arguments behind this move, the recent re-merge also demonstrates a change in SAP’s cloud strategy with a focus on a “single platform”  and, potentially, a connection with the idea that the Suite always wins (even in the Cloud!).

This focus on a single platform necessitates a quick analysis of the related transformation of Business ByDesign.

Today, Business ByDesign is undergoing a new effort by “re-factoring” the application to run on the SAP HANA Cloud Platform which will enable businesses of all sizes and across all industries and lines of business to run their entire business in the cloud more efficiently and effectively. So along with the SAP Business Suite on HANA, SAP Business ByDesign will benefit from this breakthrough technology. [SOURCE]

A team will remain in place to support the current version, which runs in an ABAP (Advanced Business Application Programming) application server, according to Sikka. “The product is going to be redone in HANA,” he said. “We’ll move every customer to this refactored ByDesign when we have it.” [SOURCE]

Here is a graphic representation of the various involved components and their recent evolution. 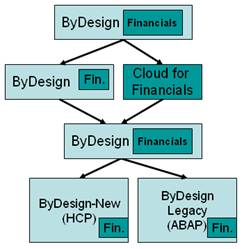 Note:  The recent announcement concerning the repositioning of the HANA Cloud Platform (HCP) muddies the water a bit since the term “HANA Cloud Platform” now refers to a distinct set of customer offers (“Infrastructure Services”, “DB Services”, “App Services”) rather than a generic technology infrastructure.  The announcements concerning the port of ByDesign to HCP predate this recent repositioning and make a description of its technical foundation in relation to other SAP Cloud offers a bit tricky. As a SaaS, it probably can’t run in the HANA Enterprise Cloud (HEC) but rather is more closely associated with the “App-Services” (the old PaaS layer).

Although there is some suggestion that the architecture in ByDesign’s HCP port will be HANA XS based, there isn’t much detail on the new ByDesign architecture besides the fact that it will run on the HCP.

My assumption is the new architecture will be typical for HCP-based applications with an emphasis on the HANA development flavor rather than JVM-based. Here is my very rough estimate of what the architecture might look like.

Is there a link to the upcoming Smart Financials product?

Note: I’m definitely not a FI-CO expert so bear with me as I blunder my way through this unknown territory making countless errors.

In a blog from Hasso Plattner last year, the massive advantages of a simplification of SAP’s Financial Products on HANA are depicted in some detail.   The upcoming product “Smart Financials” (SFin) is one manifestation of this transformation and can be seen as the next stage of the evolution of the domain.

Let’s take a quick look at the architecture of this new offer. 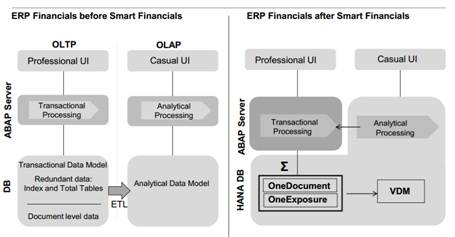 Thus, we are seeing a fundamental change in how financial-related functionality can be addressed in SAP applications.

Architecturally, how do SmartFinancials and ‘ByDesign on HCP’ compare to each other?

Note: Yes, I know that SFIn primarily focuses on financials and ByDesign is a full cloud-based ERP. Please bear with me. 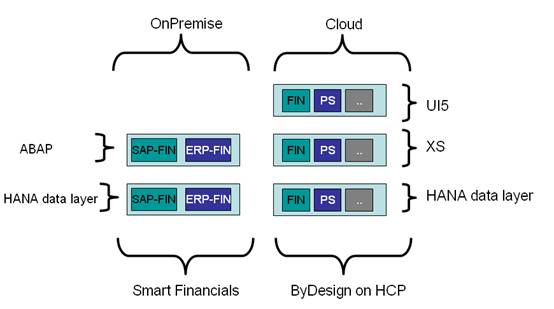 Note: A customer could run a Business Suite enhanced by Smart Financials in the Cloud using the HANA Enterprise Cloud (HEC) but we have to remember that “ByDesign on HCP” is a Suite as a SaaS rather than a single tenant cloud hosted solution on HEC.

HANA architectures are based on the exploitation of the HANA data layer (as seen in the Period Close in Product Cost Controlling Code Pushdown in the Smart Financials product) and this layer places a central role in both Smart Financials and ByDesign on HCP.  What is unclear is the HANA-related internal infrastructure of the ByDesign on HCP Product – especially regarding its finance-related functionality; is it based on the traditional architecture or the new one as seen in the SFIN product? 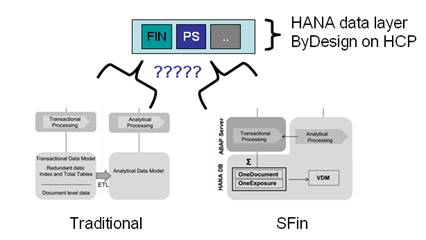 Yes- I know that I’m painting with a very broad brush. The finance-related functionality present in SFIN is probably not entirely present in the ByDesign product. (Note: It is rather difficult to discover exactly what financial-related functionality is offered by ByDesign. I found one cached document via the Google Search that provides some additional details). Rather than a comparison of specific finance-related features, I’m more interested in the more generic HANA-related architecture / functionality.

Note: Even if the new ‘ByDesign on HCP’ was based on the new architecture – a direct port would probably be challenging. ByDesign’s transition from a more traditional ABAP architecture (with its tighter relationship to OnPremise Business Suite architectures) to a HANA foundation (XS!) also implies that the transfer of the ABAP code from SFIN to ByDesign on HCP probably wouldn’t be an easy task.

The difficulties of moving from a single-tenant application (Smart Financials) to a multi-tenant SaaS application (ByDesign on HCP)  is a technical challenge but might be possible via single-tenant HANA instances connected to multi-tenant application logic. I know that the JVM-based HCP PaaS can support this functionality but I have no idea how/if this would work in a XS-dominated architecture as I suggest that the new ByDesign on HCP might use.

There are a variety of SaaS competitors who also have financial offerings (Workday, Netsuite, etc); thus, a financial SaaS offering from SAP based on a more traditional architecture – regardless of whether it is based on an isolated offering or as part of a suite –– doesn’t provide SAP with a competitive advantage.  On the other hand, a financial SaaS offering based on the architecture seen in the Smart Financials product would represent an evolutionary innovationwith the resulting fundamental business-relevant changes.

Although this blog has focused on finance-related products, there are broader implications as well. As Tammy Powlas describes in her notes about the Smart Financials webinar, future “Smart” products may also impact other functional areas as well.

Imagine the other components of ByDesign also undergoing such a fundamental change – John Appleby describes such efforts as “Simplifying Core Apps”.

Some might say: “Dude, we are talking about ByDesign here. Nothing more. Don’t blow things out of proportion”. True but we must remember that this offering is a ‘once-in-a-lifetime’ chance for SAP to create a new product based on the experience they have acquired working with HANA in a variety of scenarios / products. This port could be the foundation for something greater.

Business ByDesign is undergoing a new effort by “re-factoring” the application to run on the SAP HANA Cloud Platform which will enable businesses of all sizes and across all industries and lines of business to run their entire business in the cloud more efficiently and effectively. (my emphasis) [SOURCE]

SAP CEO Bill McDermott suggests that Suite will win in the Cloud too.  The question is whether the Suite to which he is referring is the existing Business Suite running in the HEC or something else.

We know that SAP is planning some important cloud-related announcement in April.  I’m curious to see if the announcement deals with the next Generation ERP as described above.

Or these developments could evolve in a totally different direction.

Recent Cloud architectures presented by SAP show an unaccustomed positioning of Business Suite as part of the Industry Portfolio (where it does also belong) rather than the LoB Portfolio where it thematically might also be situated although SAP already has cloud offerings (SuccessFactors, Ariba, etc) in this area. 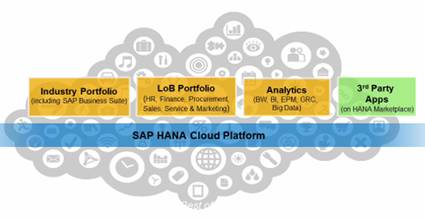 The port of ByDesign to HCP could be foundation for the cloud-based next generation Suite. ByDesign is usually associated with the SME market but, in its next HCP-based iteration, might easily expand to support other scenarios (for example, supporting industry solutions for larger customers).  As seen in Salesforce’s recent foray into the vertical markets, this will be a critical market in the future and one in which SAP currently has the lead at least in terms of the domain experience present in their ecosystem

My bet is that SAP can get there more quickly provided it concentrates resources into that area and/or mobilizes its extensive developer network to fill in white spaces. Both options are open to the company if it plays nicely along with potential extended partnerships with its existing SI community. [SOURCE]

Yet, this expertise is based largely on the older Business Suite technology rather than the simplified/ evolutionary architecture (as seen in SmartFinancials) which will in all likelihood be the foundation for the next generation Suite.