Since the acquisition of WhatsApp by Facebook, just prior to the 2014 Mobile World Congress, there has been considerable press about Facebook and WhatsApp.  In the last few days, the latest headlines have been about how WhatsApp handled a record 64 billion messages in a 24 hour period.  That is a fantastic number and it represents magnificent growth.  I’m not trying to take away from this brilliant achievement, but I must point out that WhatsApp subscribers didn’t really generate 64 billion messages.

WhatsApp also noted that they recorded 20 billion inbound (originated) messages and 44 billion outbound (terminated) messages.  Simply stating that “WhatsApp handled 64 billion messages in a 24 hour period is misleading.” In fact, WhatsApp subscribers sent 20 billion distinct messages.  They are counting the message when it leaves the originator and then counting it again when it is received by one or more recipients.  That’s not the most accurate way of publicizing their messaging metrics and unfortunately; both the press and some analyst do not make this distinction.

How this industry counts messages is not the most standardized process; however, we should be counting distinct messages (with one originator and at least one recipient): 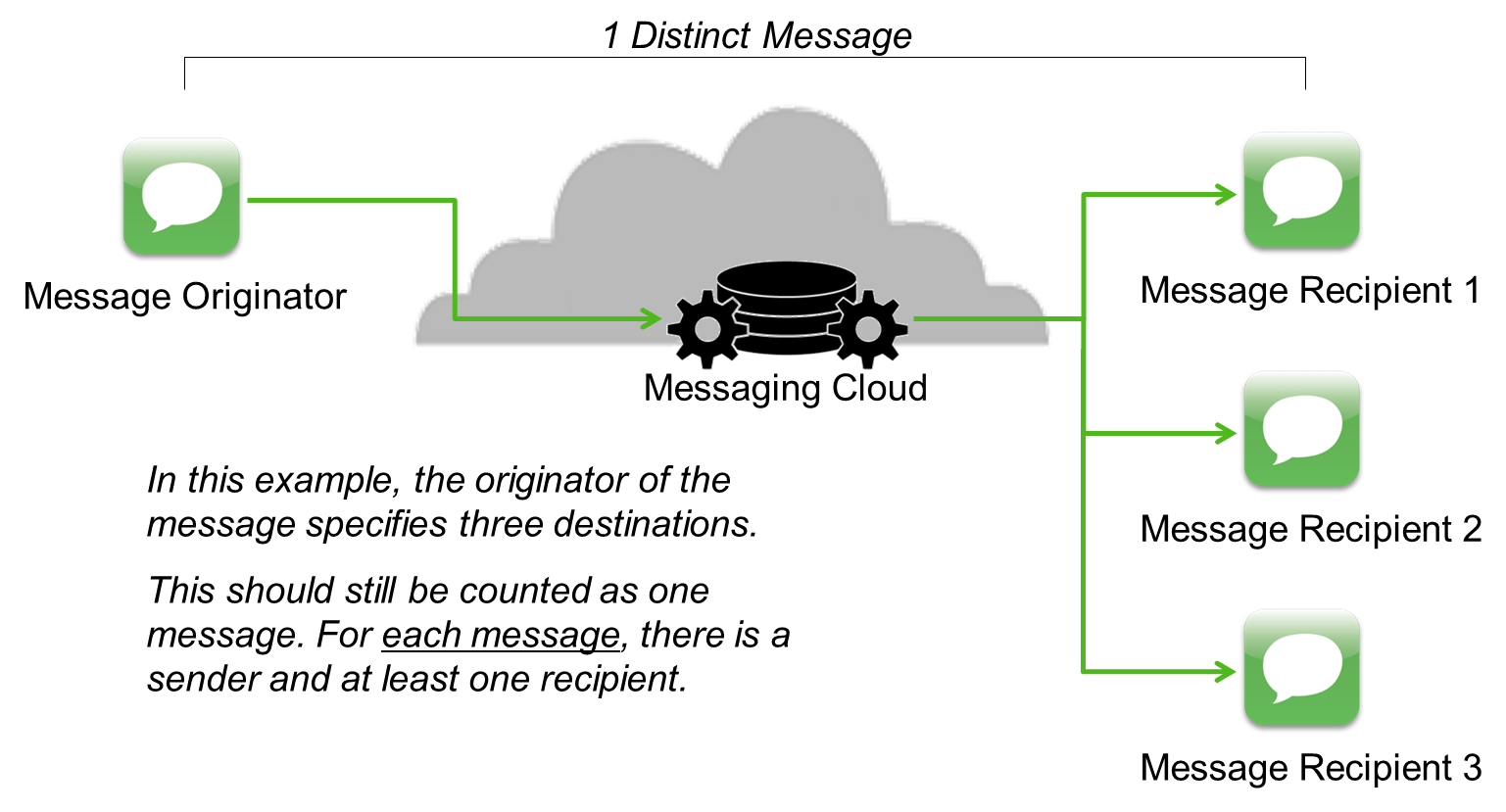 Today, there are approximately 22.5 billion SMS messages generated worldwide, on a daily basis.  This is based on SAP Mobile Services’ own traffic statistics, coupled with information from Portio Research and others.  Much has been said that WhatsApp alone greatly exceeds the daily SMS volumes.  Again, this is not completely true, although, they are knocking on the door.  As a group; however, OTTs (non-SMS interworking) do exceed the daily SMS rate.   I have calculated that OTT messages are between 35-45 billion messages per day – even if I only focus on the real number of distinct messages that are generated.

So, let’s talk about the differences in how subscribers interact with OTT messaging services vs. SMS for a moment.  First off, I should also acknowledge that these messaging style differences were brought to my attention from a Portio Research report that we reference.

One of the nice things about pure OTT messaging services is that many offer typing indicators along with delivery and/or read indicators.  Many even provide the concept of presence – that it, the availability status of the other party is displayed.  It is much more of an Instant Messaging type of exchange.  Therefore, each user will likely send many more messages to convey the same thoughts and ideas that would normally be sent in only one or two SMS messages.  The mindset of most senders of an SMS is that they’ll send the message and expect it will be read either now or in the future.  If the other party reads and responds quickly, then the exchange could take on a more IM-style characteristics.

The example below shows the differences between an OTT based conversation and an SMS conversation: The OTT conversation shows 8 distinct messages (although WhatsApp might say that’s 16 messages! ) while the SMS-based conversation conveys the same ideas in 3 messages.  While this is a rather radical view, the concept is sound.  In reality while many SMS messages convey more in the initial messages of a conversation, most times, once both participants realize they are chatting in near-real-time, they conversation looks more “IM-like.”  Nevertheless, this illustrates how free OTT apps can easily generate more messages per conversations than SMS.

The key to accurate OTT messaging metrics as a measure of progress is a common statistic; however, it is also one that can easily be misunderstood.  That measure plus number of monthly active users (MAU) are both good indicators of the true reach and value of a messaging service.  Simply stating that a service has 100 million registered users, without an MAU metric is useless.  For example if 100 million users were registered, but only 20 million are MAU, then there is likely some problem with the app/service when 80% are not using the service on a monthly basis.  Interestingly, MNOs do not typically report MAU for certain services, but simply subscribers.  We then have to look to other metrics, sometimes painstakingly acquired by analyst firms, to ascertain more usable metrics regarding overall status of a service.  Accurate measurements of messaging and similar metrics in today’s global mobile ecosystem are important as it enables both potential users as well as enterprises to make accurate decisions about engaging with and using these new, innovative services.

Hi Bill. You site the Portio Research report which illustrates different conversation styles in SMS and OTT communication. The idea is interesting, but the paper doesn't site any actual data to prove the theory. If there were statistical data that shows the distribution of lengths of OTT messages we could compare it with SMS traffic and make more accurate analysis.

Another topic is the aggregated "perceived value" of the messages. Being the person to person messaging commoditized and in the case of the IM tending to send shorter messages but increasing the number as you explained, the average "perceived value per message" decreases. Person to person message is moving to elevator talk "hi, the weather is cold".

The SMS is transporting more perceived value per message (not only $), as for the users is important to receive alerts from the credit card, or make a microdonation, or being notified that your tax declaration is being proccessed.

Whatsapp is not knocking the door of the perceived value as it is stuck to deliver a very good person to person IM experience but other are knocking the door of the value (Line, Wechat) by providing access to the enterprise for B2C comms. The trouble for telcos is just there, messaging perception is moving to something multimedia, and multimedia brings a lot of more value for B2C comms. SMS and SMS VAS grew without competition but in this second wave (multimedia IM) competition will be fierce and time is money.

Telcos may embrace RCS to stay relevant in messaging and also leverage the value of their VAS experience and enterprise contracts to make RCS messaging the one delivering more "perceived value per message" and of course, monetization.