Why you cannot use notifications with basic approvals

The enhanced approval mechanism was introduced with SAP NetWeaver Identity Management 7.2 SP4. The purpose was to add more functionality as well as improve performance.

For basic approvals, the approvers are defined on the task, and it uses the same mechanism as the access control. This may include using an SQL filter, to determine who is allowed to approve. This gives you a really powerful way of defining the approvers, but also has some drawbacks.

In the following example, I’ve defined a role called ROLE:APPROVER. A user with this role is allowed to approve, but is only allowed approve users within the same cost center, i.e. with the attribute MX_COSTCENTER with the same value. 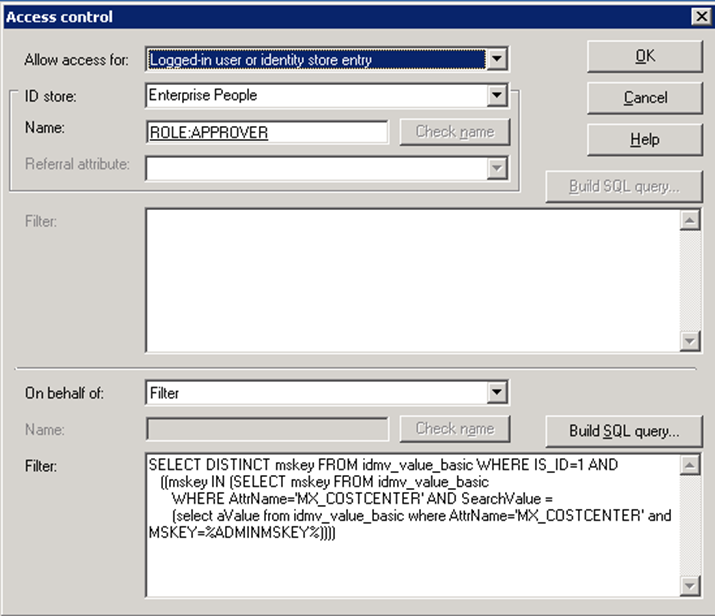 The filter to select users within the same cost center may look like this (on Microsoft SQL Server):

During execution, the %ADMINMSKEY% will be replaced by the MSKEY of the approver.

It is not possible to “reverse” the statement to get all the approvals for a given user(%ADMINMSKEY%).

As a side note: determining approvers for assignment approvals is simpler, as this will always be a list of users, privileges or roles, which can be expanded immediately.

A major performance improvement was done with handling basic approvals, as the approver information is saved, which means that each approver only needs to run the above check once, for each new approval.

Whenever an approver is calculated, this approver is added to the internal approval data structure, which means that subsequent listing of approvals is very fast, compared to having to calculate this every time the user lists the approvals.

The MX_APPROVALS attribute is (as before) written to entries where an approval is pending, but is not used during the approval process. Therefore, if you have code which has manually changed this attribute, this will not have any effect on the pending approval.

With the 7.2 approvals, we also added approval administration, both for manager and for administrator. This works fine for the assignment approvals (which are always expanded), but for basic approvals, you will only see approvers which have actually listed their approvals in the “To do” tab, and as a result, being added to the mxi_approver table.