The goal of this blog is to explain the usage of a shadow system during the maintenance of ABAP based systems. This is in close correlation of the preconfiguration mode which is set in a SUM dialog during the configuration of a maintenance:

If you want to renovate the house you live in, you may have a period of time during which the usage of the house is not possible.

The “downtime” of the house may be long. And after the renovation has started, there is no easy reset to the initial state of your house.

Advantage is that you do not need additional resources for a shadow house (see below).

There are two different ways to create the shadow: either you copy your (customized) house, or you create a new house from blueprint.

A shadow (SHD) system can be used by SUM during system maintenance (or update) parallel to the existing ABAP system.

A shadow system uses the same system-ID as the original system, but has a separate instance (shadow instance, own instance number) and a separate repository (shadow repository). 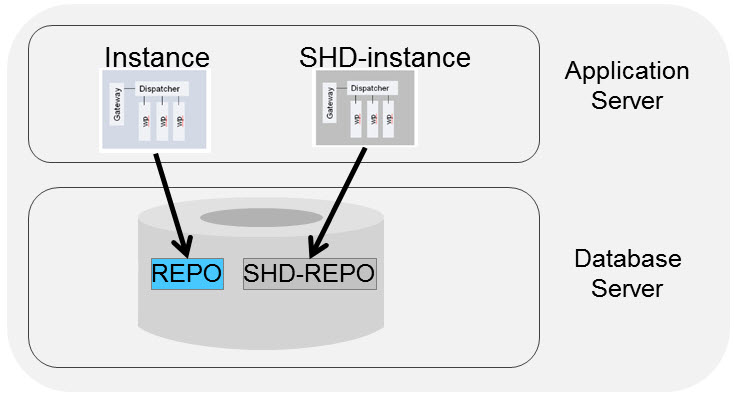 ℹ An instance combines some processes on OS level (like work processes, gateway, dispatcher, …) that can be started and stopped together. It is somtetimes also called application server (software view).

ℹ The ABAP repository is a specific part of the database and consists of all development objects like programs, classes, database table definitions, and so on.

ℹ Uptime processing is the time during which the SUM is already preparing the update of the system, but the system is still available for end users to change data.

The shadow system has the advantage that the downtime is reduced, but you have to consider additional resources: memory on the application server for running the additional instance, and space on the database for the additional tables of the shadow repository. (Remember that the repository is typically only a very small part of the database content, and it is independent on the total DB size.)

When and how a shadow system is used

Remember the two possibilities above to create the shadow house: “copy your house, or create from blueprint”?

For system maintenance, this is equivalent to the difference between update and upgrade:

ℹ Note that in the documentation, we just say update for all scenarios, like the name of SUM contains only update as the general term.

If you choose single system mode in the preconfiguration mode (see first screenshot above), this means:

ℹ Single System Mode is sometimes also referred to as resource-minimized mode, as only few additional resources are required. On the other hand, the Standard and the Advanced Mode are both referred to as downtime-minimized mode, as only they offer downtime minimization. After handling the preconfiguration mode dialog (first screenshot above), the next dialog “Parameters for procedure” allows setting the number of processes, and it lists the mode as resource or downtime minimized (e.g. “The tool uses strategy Downtime-minimized.”).

Difference between Standard and Advanced Mode

Thanks Boris, great as always. Would you care to share additional details on what exactly happens and when with the shadow system. Especially useful would be to know how data is imported and activated in the shadow system which is then switched to become the target system. Another useful piece of information would be when is the last point transports can be imported into the source system so that they will be included in the shadow or rather the target system. See this discussion thread for details.

Thanks Boris,for sharing such a nice document with us.

Great blog with lot of information. thank you.

Great explanation with comparison to real life simple scenerio, this clarifies a lot of basic doubts

Than you . Just one question.  Is it possible in easy way to move the shadow instance to the specific application server? When upgrading production system users works usual, when shadows activation take place. Running shadow on dedicated sever can decrease the performance impact.

I dint see this function in SUM, I cannot even select the instance number for shadow,

But one pint is still unclear.

Let's assume I have 3 serves:  CI AP1 AP2.  I am running SUM on CI, and habve a new clean server AP3 for Shadow Instance only. Do I need to install a dialog instance at AP3 before the upgrade, or SUM can install the files structure /usr/sap and all services remotely?

We can install shadow instance either on existing dialog instance (AP1 and AP2) or on new server (AP3).

Please find the below prerequisites for installing remote shadow instance:

Hi Boris, I have a question.

You say that only _some_ customizing tables are cloned to the shadow instance.

What is the criteria for selecting which table gets cloned and which not?

What about, in particular, for customer created customizing tables?

Only the customizing tables that will undergo a change in structure with upgrade are cloned to shadow instance in addition to mandatory basis tables which are required to keep shadow instance operational.

Thank you so much for your info!

Such a useful document.

Great article. Thank you for sharing this information Boris!

Great explanation, this should be included in the sum guides to get a better picture of preconfiguration system mode.

Great explanation.if it is possible can you post in depth explanation on shadow system.

means how upgrade will happen and all...

That is very clear and a wonderful explanation on the upgrade/update process. Quick question on what happens to the original tables (non-upgraded) that were used for on-going operations once the system is switched to newer version. To be more clear - the REPO that was used for on-going production operations before the switch, do that tables get deleted or they still remain in DB? Thanks.

What would happen if you choose different 'preconfiguration modes' in each upgrade cycles? For instance, 'single system' during cycle 1 and 'standard' during cycle 2 and go live. Would it have any effect on the upgrade?

Thank you Boris, for sharing this useful information with us.

Great Article and simple to comprehend.  Can you please furthur explain on what happens in the shadow instance. I mean, the customizing tables and basis related tables are imported into the shadow instance and while going for the nDMZ preconfiguration mode, even some of the application tables are loaded in the shadow repository. But my question is, whether it will require more space on the server. Say for example, if my source DB occupies 5 TB of space, do i need 5 TB more space on the server just for my shadow instance or a letter less maybe 3 TB more for my basis tables and customizing tables?

I hope you can help me to understand the impact on SQL database after SUM reset. We had to reset and clean up our update process before downtime phase. The reset was a success according to the message in SUM. However, our database size was not reverted back to pre update state. It looks like tables copied during shadow instance creation stayed. What are the means to remove unnecessary copied objects to bring the size of files to pre-update state? Thank you in advance!

using the RESET functionality of SUM will cover all necessary steps. Not sure what exactly you observed, if in doubt you may have to create an incident.

Can it be monitored in the shadow instance and possible to initiate manually before the downtime if it does not happen?

sorry to say that I do not know what "online replication" is in this context.

For conversion to S/4HANA release prior to 1909, shadow system will still be created and built from DVD repository for release target version on the source database, before moving it to DB target host later on the process.

If my source RDBMS is Oracle, does it mean SUM will first install HANA DB software along with S/4HANA product on the source database for the shadow repo?

Thanks for the link. That article was actually the basis of my doubt, which I’ll mention below.
It makes sense to me on S/4HANA 1909, when target repo is created in HANA DB.

I have no doubt about shadow repo until S/4HANA release, or specifically until you mentioned that starting with S/4HANA1909, Shadow REPO will be created in HANA DB instead of source RDBMS.

So when I saw your last picture above, it made me wonder: How could S/4HANA REPO prior to 1909 live on a non-HANA DB structure.

Boris Rubarth
Blog Post Author
February 27, 2020 at 11:58 am
Hi Bobby,
thanks for asking. I am afraid you expect the shadow repository to be fully equivalent to a standard repository, which is not the case. Sorry that my simplified overview led to this impression.
The shadow repository does not contain application table content, and - more technically - the shadow repository does not even have the application table definition on database level (database objects), only on the dictionary level (runtime objects). So there is no "new SAP release for Oracle DB equivalent to S/4HANA".
Another minor comment on your sentence "Shadow repository is built from the clone of source REPO" - for a system conversion to SAP S/4HANA, the repository is not created from the source system but from the export delivered by SAP (load procedure, see SAP note 2318321).
Regards, Boris

This line from SUM guide made me expect that it is built from the source REPO and adjusted by the conversion export/customer modification:

The SUM builds up the shadow system by cloning parts of the original system.

As for shadow kernel, you mentioned that SAP S/4HANA 1909 uses SAP kernel 7.77, which works exclusively with SAP HANA as database. So that's why REPO will always be created in target HANA host.

But I can still download database dependent kernel 7.77 for any DB.

Boris Rubarth
Blog Post Author
February 28, 2020 at 9:32 am
Hi Bobby,
thanks again for asking.
Concerning the guide: yes, we can be more specific here - the statement in the guide generally speaks about the shadow system, not specific about the shadow repository.
And concerning kernel 7.77: yes, this Kernel is available for non-HANA databases as well, but only to support secondary database connections. The primary connection works with SAP HANA exclusively.
Regards, Boris

Thank you for taking your time to explain how it works.

Thanks for clear explanation with perfect example!

I just have a small doubt, So once the shadow instance gets created during the SUM process. If we come across any error where it mentions few inactive objects are still present in the system.

where do we make the change(activate/delete assuming it is z* object which can also be deleted) on Shadow system(000 client) or Original system(100 - working client)?

I would really appreciate the help on clarifying this doubt.

you will do the change on the original instance, not on the shadow instance.

Thanks for your valuable information.

However from the second "Maintenance with shadow" screenshot that you shared it seems the changes need to be done in the shadow system only.

And in one of the upgrade where i was working SUM stopped in ACT_UPG phase due to the presence of some inactive Z* objects in the system and once i deleted them from Shadow then only those objects got removed from that SUM error.(even though they are still present on the original instance)

So, i am bit confused here. Could you please clarify?

I can't comment on the experience that you report. Just on the screenshot (rather: illustration) "Maintenance with shadow": this is a simplified view that can't explain all aspects.