As someone who has been involved in the SAP ecosystem for almost 20 years, it is very interesting to see what SAP will do next. Last week I was invited to attend an SAP media event focusing on a few of their new partnerships during the Sony Open.

For my first post, I am focusing on GENYOUth .

SAP has a multi-year commitment to GENYOUth, which is a non-profit organization dedicated to improving nutrition and physical activity in U.S. schools. During the media event, there was a panel discussion in which Alexis Glick, CEO of GENYouth Foundation, spoke about why they are partnering with SAP for innovation and how technology is needed to share knowledge and best practices. They also partner with organizations such as the NFL and the American Dairy Association to inspire and educate youth to improve their nutrition and increase physical activity.

Joining Alexis on the panel were some amazing young adults who spoke about Fuel Up to Play 60. This is GENYOUth’s flagship program that encourages kids to eat healthy and participate in 60 minutes of physical activity each day.

We first heard from Tyler K., an 11th grader from Michigan. Tyler has participated in Fuel Up to Play 60 for years and has led three Student Ambassador Summits. Tyler spoke about the program he launched in his school called TEXT, which stands for Talking and Exercising to Tunes. It started out with students walking around the gym for 30 minutes each week while listening to music and later expanded to include basketball, volleyball and jump-roping.

It was then Noa S.’s turn. Noa is in 9th grade and from Maine. She spoke about how she received a grant for an Xbox 360 Kinect from the Fuel Up 60 to Play program. She spoke about that when living in Maine it is not always possible to exercise outside due to weather conditions. The Xbox gave the students the ability to participate in physical activity indoors. She also described how bigger and stronger students dominate in sporting teams, but the Xbox “leveled the playing field” so all students could enjoy it and have fun.

We then heard from Heaven M. Heaven is in the 8th grade and from Louisiana. She has led or participated in multiple Fuel Up to Play 60 programs, such as Walk for Wellness Club and Dance Around the World. She spoke about starting up a Wellness Café to provide students with healthy food choices like fruit smoothies and granola. She said that this has helped the student’s change their eating habits as well as improve social interactions by “breaking up the cliques.”

These three young adults and future leaders are amazing and it was a real pleasure to meet and talk with them.

Hear more about this in a SAP video interview.

Here is a link for a GENYOUth blog about this same event. Details about the WTA & the Sony Open coming from me later this week. 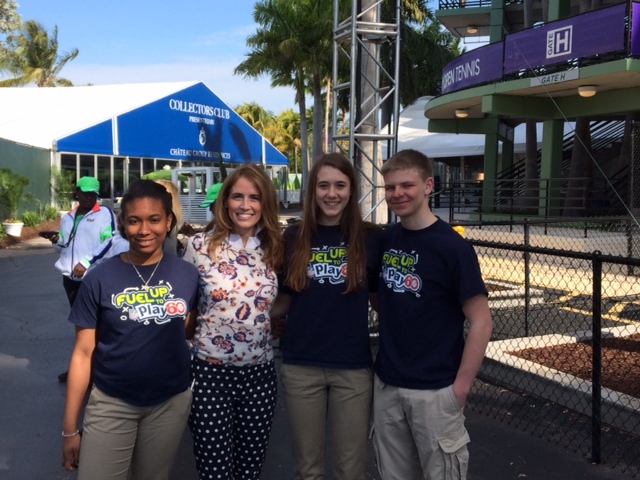 Hi Karin,
Thanks so much for blogging about this!  How did I not know that SAP is working with GENYOUth?  The three kids' stories which you told are so interesting, particularly Noa's story, given the seemingly un-ending winter we're having.

Thanks Sue - This new partnership with GENYOUth is very interesting and was glad to find out about it as well!

Thank you for sharing this wonderful story, Karin.This is a great program and win-win for so many:

- The youth who have fun getting in shape and eating right

- Sony Open for publicity and the app

- SAP to help demonstrate the strategy for mobility and apps

Glad to read that there's more news to come!

I think I could benefit from these GENYouth tips myself.

I look forward to hearing more about your WTA experience.

Thanks for posting Karin. Our involvement with GENYOUth is fantastic, and I'm excited to see it applied towards tennis. As an avid tennis player myself ever since the age of 8, there are so many benefits to the sport -- from fitness to social, from focus to decision-making, from adaptability to flexibility, etc. It is one of the only sports that people can play and compete in from child to senior. I hope that thru programs like this, we can elevate the game of tennis in such a way that it becomes more prevalent with kids in the US.