How to use Pre-Load and Post-Load command in Data Services.

In this article we will discuss How to use Pre-Load and Post-Load command in data services.

For this scenario, we can use Pre-Load and Post-Load command. Below the details

How to use for our business requirement?

We can use both Pre-Load and Post-Load command to execute program before and after transform, below the steps will explain in details

Right click on target object in Dataflow and press open

The Target object option will be shown as below

To add a new line, determine the desired position for the new line, select the existing line immediately before or after the desired position, right-click, and choose Insert Before to insert a new line before the selected line, or choose Insert After to insert a new line after the selected line. Finally, type the SQL command in the Value box. You can include variables and parameters in pre-load or post-load SQL statements. Put the variables and parameters in either brackets, braces, or quotes. 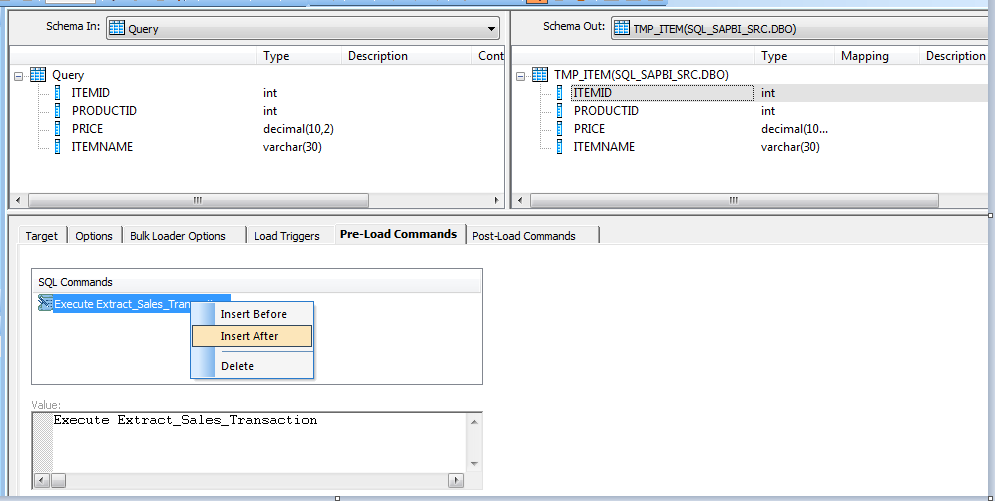 To delete a line, select the line in the SQL Commands box, right click, and choose Delete.

Save and execute. The job will execute Pre-Load, Transform and Post-Load in a sequence.

Because the software executes the SQL commands as a unit of transaction, you should not include transaction commands in Pre-Load or Post-Load SQL statements.

Is pre-load and post-load replacement of before and after trigger in Oracle?

Good to see such a good Document