We often receive inquiries about the roadmap for SAP Screen Personas. While revenue recognition rules prevent us from sharing specific product features, version numbers, or release dates, I would like to share some information about the general direction of the product and how development is progressing. 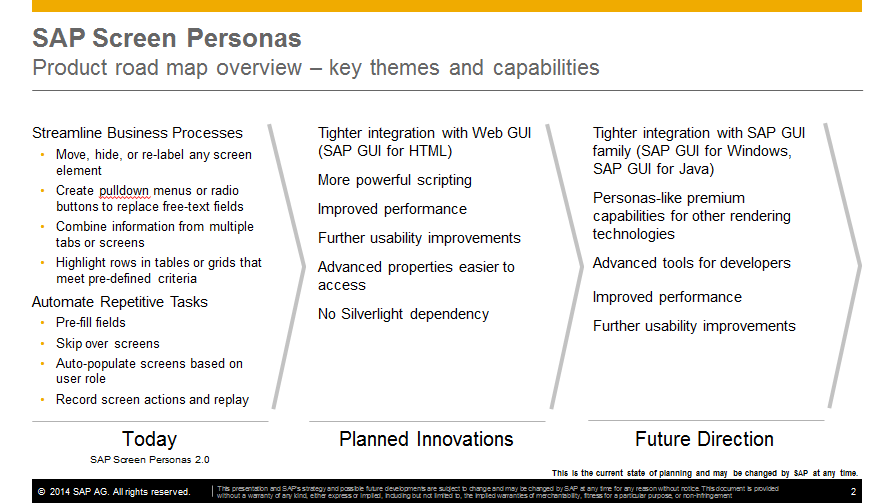 We have had many conversations with SAP Screen Personas customers about what they love about the product and what areas they would like to see improved. These are ongoing discussions that drive product development based on their feedback. Over the past few months, several categories have emerged. These are reflected in the key themes for the next major release:

Development Update
We are making steady progress on the next major release of SAP Screen Personas. The development team has grown to include developers from the kernel team and core UI team in addition to the custom development and SAP Imagineering organizations. This cross-departmental team ensures that the necessary integrations among the different components will work smoothly. Interestingly, the broader development team is what will allow us to deliver a simpler architecture, which we expect will deliver improved performance.

Ongoing Co-Innovation
We are working with several existing Personas customers on the next version. They are providing their use cases (including screens and scripts) and we are testing these to validate functionality. They are also part of some design reviews to ensure that we continue to raise the bar on usability.

Roadmap Disclaimer
Let me also include the standard SAP roadmap disclaimer that everything mentioned here is subject to change without notice and we are not committing to delivering any of the functionality discussed above.

To avoid questions that will potentially take us into murky waters regarding revenue recognition, I have disabled comments on this post.

And apparently upset several people by doing so.