Rethinking Business and IT – Big Data in Marketing and Ubiquitous Computing

2014-03-21, St. Leon-Rot, Germany – The second instance in the series Rethinking Business and IT by SAP University Alliances covered the topics of Big Data in Marketing and Ubiquitous Computing both presented in lectures by esteemed Professors Dr. Bernd Skiera from the Chair of Electronic Commerce at the Goethe University Frankfurt am Main and Prof. Dr.-Ing. Michael Beigl from Chair of Pervasive Computing Systems at Karlsruhe Institute of Technology. 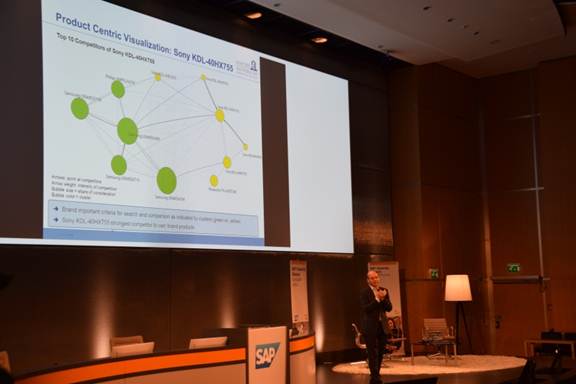 After an introduction and warm welcome of the speakers and audience by Dr. Wolfgang Faisst, Suite on SAP HANA Outbound Product Management at SAP AG and Niraj Singh from SAP University Alliances the first lecture by Professor Skiere started. The title was “Big Data in Marketing: Visualizing Asymmetric Competition among more than 1,000 Products using Big Search Data“.

Professor Dr. Skiera talked in his session about Big Data in Marketing using a research project on competition from the consumer television market at his chair as an example.

He opened with answering the question of why we have Big Data today (digital world and technology to generate and store the data) also looking into the future talking about potential sources of even more data (e.g.  Google Glass, face recognition, Fit Bit or smart phones). He followed up with discussion the question of what makes Big Data projects successful and concluded that the decisive factor is that projects should not start with
trying to use a certain technology but that it should rather be the other way around that you think about what you want to accomplish and what hinders you to do so.

After these general reflections and insights into Big Data Prof. Skiera continued to introduce the Big Data marketing project from his chair. The project wants to analyze what the competitor products of a given product are. The empirical study analyzed the television market. 56 brands producing LED TVs with 1,124 products were considered. This resulted in 1,262,252 analyzed competitive relations.

The analysis was based on information on what consumers search for, what they consider to buy, of what products consumers compare prices of and what they eventually buy. A key finding was that the data from price comparison pages has the strongest predictive power when striving to predict actual consumer behavior. 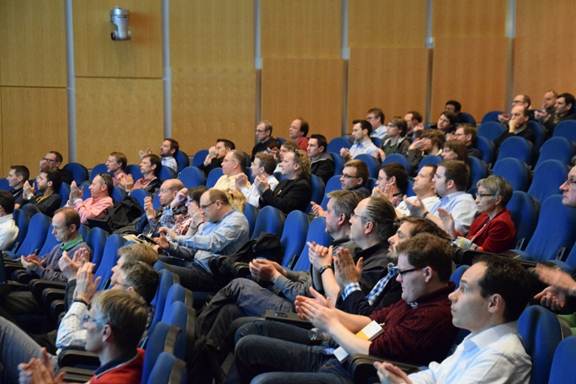 Also the analysis provided insights on which products compete with which other products and also on how products cannibalize the market share of a brand internally.

Professor Dr. Skiera closed with an outlook on what future research expansions would be possible. He described that an enrichment of data with demographics, purchase power, more product attributes, advertising expenditures or time series data might prove useful. Also extending the analysis by looking at different industries or studying the cannibalization of new products would be interesting. 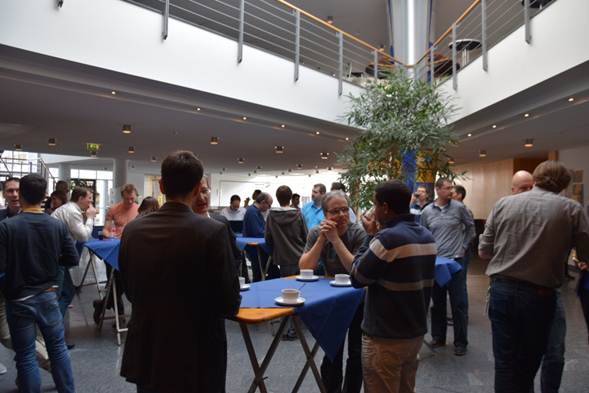 After a short networking break with snacks and drinks the second lecture followed.

In his lecture Professor Dr.-Ing. Beigl introduced the concepts of ubiquitous computing as well as pervasive computing and in the last section provided real live examples of “ubicomp” as he called it.

He explained that pervasive computing describes computer systems that are integrated into the world and people‘s lifes in order to allow the ability to easily access information anywhere. The concept concentrates on the system view. Similarly ubiquitous computing means having computers and IT omnipresent but barely conceivable. In ubiquitous computing the systems have to remain in the background, assisting and providing services without drawing any attention to them. 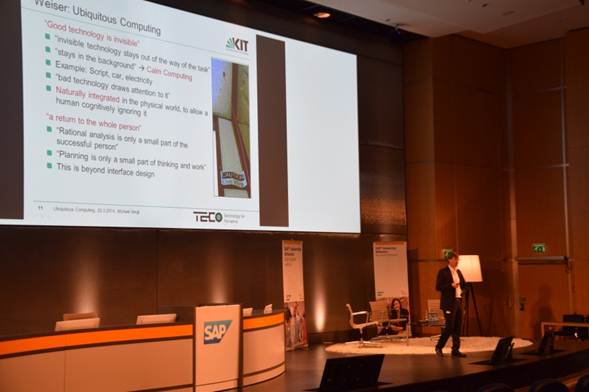 The concept of ubiquitous computing was invented by Marc Weiser at Xerox PARC in 1980 and that also the term calm computing refers to it, Prof. Beigl explained. The computers have to achieve a state where cognitive embedding takes place and they become  effectively invisible to the users. According to the ubicomp concept technology is bad if it draws attention to it.

Professor Beigl went on to describe the 3 main types of field studies in ubicomp:

The audience learned that in the development of the ubicomp model all abstractions have to be driven by a focus on humans, design and the requirements. The research usually moves from an exploration phase to a thesis driven phase in contrast to how academia usually progresses. 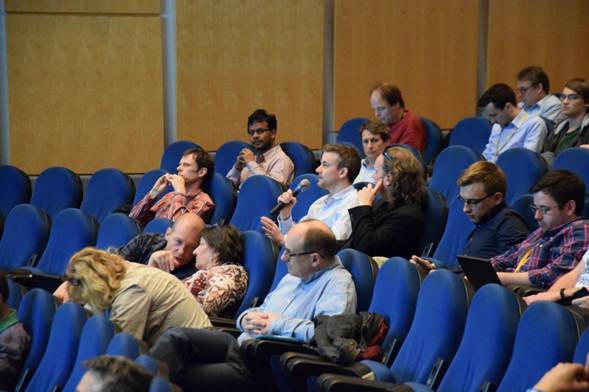 ProfessorBeigl also elaborated on the additional efforts that ubicomp studies require like the logging of activities and their context, methods to sample experiences and the long run times of ubicomp studies.

He concluded with describing a few objects of ubicomp studies which were augmented reality systems (focus on user interface software design)
to support maintenance tasks and the design of a particle matter sensor appliance that was realized as a mobile phone with an attached printed sensor.

Following the lecture there was a question & answer session with the audience. 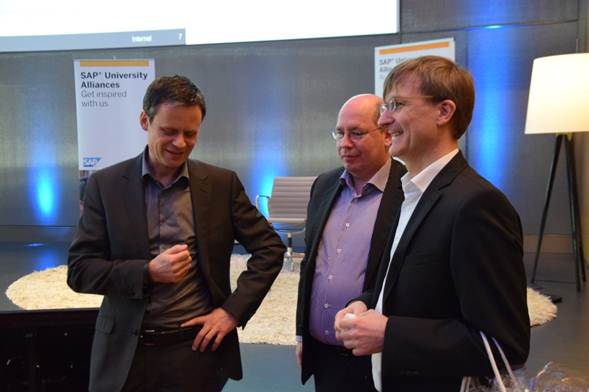 Dr. Bernd Welz, Executive Vice President, GlobalHead of Solution and Knowledge Packaging at SAP, ended the event with closing remarks on the session, an overview of the upcoming events in the series and thanking the speakers from the universities with presents. He especially highlighted the upcoming screening of the movie „The Human Face of Big Data“ open to all employees in Walldorf and St. Leon-Rot in the canteen of building WDF03 on April 7, 2014 from 4-5pm. 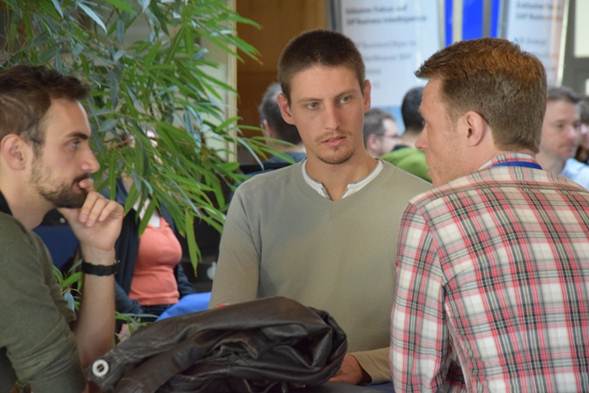 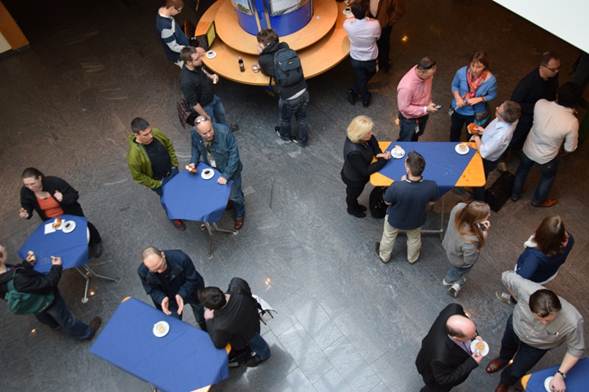