This blog focuses on the eventing framework for messages exchange between different ABAP sessions based on publish/subscribe channels,, also known as ABAP Messaging Channel (AMC).

Integration of Messaging Channels into the ABAP Engine

The following diagram (figure 2.1) shows the interaction model between AMC consumers and AMC producers in different ABAP sessions which are residing on different application servers. On top of the unidirectional communication also other communication patterns can be established, e.g. bidirectional communication. Furthermore a session can act simultaneously in both roles as AMC consumer and producer. The present ABAP Messaging Channels support only the best-effort quality of service of messaging but no reliable messaging such as exactly-once or exactly-once in order.

Figure 2.1: Exchange of messages based on ABAP Messaging Channel

The ABAP Messaging Channels support also the exchange of messages between ABAP sessions and WebSocket clients. This kind of communication is called “Collaborative” scenario. In order to reach this goal the ABAP Push Channel applications (see my blog on the ABAP Push Channel) are able to bind their WebSocket connection to ABAP Channels in a way, that the WebSocket client acts as consumer of AMC messages. This scenario is described in the dedicated blog “Collaborative Scenario”. Figure 2.2 illustrates a simple scenario for publishing a message, which is consumed by a WebSocket client.

The channels provide following possibilities to define/restrict the number of recipient of a message:

This section contains a step by step description of the creation of an ABAP Messaging Channel application.

An ABAP Messaging Channel (AMC) application can be created in two ways.

As of release 740 SP5: In the transaction SAMC using the context menu entry (“Right-Click”) on the “ABAP Messaging Channel” entry and selecting “Create” (see figure 3.2):

In the next step, enter the name of the AMC application and confirm the popup screens (press “Enter”). In this example “YAMC_TEST” is used as application name (see figure 3.3): 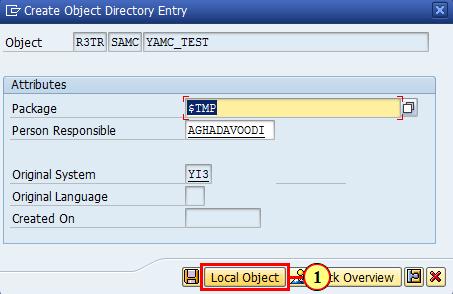 Then, fill the next fields:

The construction of the Push Channel Protocol (PCP) is very similar to an HTTP message with (header) fields, i.e. field name/ field value pairs and a body with the exception that PCP does not contain any request/response line. Furthermore the field names are case-sensitive and in Unicode. The Body part is optional and can be either binary or text. A PCP object in ABAP  is created via the class factory method CL_AC_MESSAGE_TYPE_PCP=>CREATE( ).

For this basic example we choose the message type TEXT by clicking on input help Message Type ID (see figure 3.7): For this example select the entry Client (see figure 3.9):

For the maintenance of the access rights of the AMC channels dedicated reports in the role of producer, i.e. sender, and consumer, i.e. receiver, of AMC messages is needed. In the next steps following example reports will be created:

The programming model of ABAP Messaging Channels is simple. The class factory CL_AMC_CHANNEL_MANAGER provides AMC producer and consumer object. After creation of the AMC producer object for the respective channel, i.e. “<application name><channel id>[<channel extension id>]”, messages can be published with the provided interface method SEND. For the consumer receiving messages can be started with the interface method START_MESSAGE_DELIVERY. For this action an (call back) object has to be provided which implements the interface receiver method RECEIVE. Furthermore in order to receive the message the session has to be in an “interrupted” state. This can be achieved explicitly with the new ABAP statement WAIT FOR MESSAGING CHANNELS <expression> [UP TO <time> SECONDS].

Create the test report YRS_AMC_RECEIVE_MESSAGE_TEXT in the transaction SE38 and copy-paste following ABAP code as context for the report (see figure 3.10): 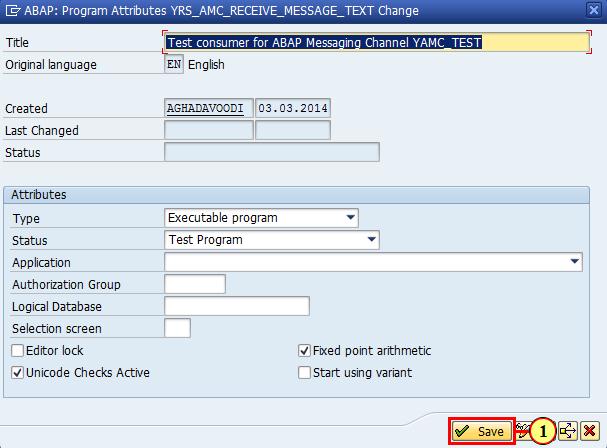 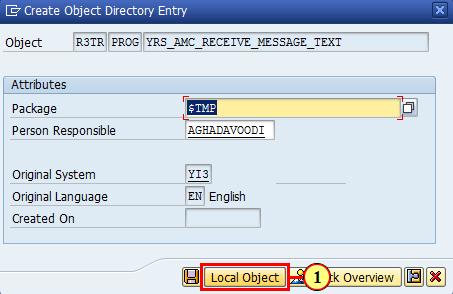 Now insert the following ABAP code into the report and save the report (see figure 3.13):

* Consumer test for ABAP Messaging Channel YAMC_TEST”
CLASS lcl_amc_test_text IMPLEMENTATION.
METHOD if_amc_message_receiver_text~receive.
*
* remark: in this method should the message be received and  the main actions
* should be processed in the main program and  usually after WAIT statement.
* Any kind of communication, e.g. RFCs, HTTP and message hanlding,

* e.g. error message is not supported and  will lead to ABAP dump.
*

*
* wait until a message is received but not longer than waiting time in seconds
*
WAIT FOR MESSAGING CHANNELS UNTIL lines( gt_message_list ) >= msg_nr UP TO wait_sec SECONDS.

Create the test report YRS_AMC_SEND_MESSAGE_TEXT in transaction SE38 and copy-paste the following ABAP code as context for the report (similar to figure 3.10-2.13)Insert the title “Producer test for ABAP Messaging Channel YAMC_TEST” for the report.

Now insert the following ABAP code into the report and save the report (see figure 3.15):

Choose Authorized Program and insert the report YRS_AMC_RECEIVE_MESSAGE_TEXT in the popup (see figure 3.16).

Similar to the previous steps insert the report name YRS_AMC_SEND_MESSAGE_TEXT with the activity Send (see figure 3.20). 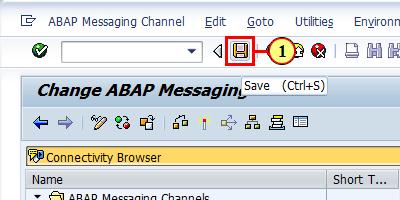 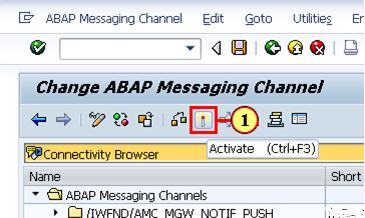 Remark: If during of execution of an AMC program the AMC exception with the message

is raised, this is because in the “Authorized Program” area (see figure 3.12) the reported program is not maintained appropriately.

Limitation: In the present version of AMC framework is the size of AMC messages limited to ~31 kbytes.

Recommendation: The basic goal of AMC messages is the notification of subscribers about an event. If the subscribers should be informed about any changes to an entity in  this case is the transfer of the resource URL of the affected entity  to the subscribers recommended.The URL should refer to the persisted entity record, e.g. in the database.

The access rights for AMC channels are controlled via code based authorization and by maintenance of reports, i.e. classes, function groups or includes, which are permitted to apply an action, i.e. publish, subscribe, to the channel.

For the case, that  a channel is bound to a WebSocket connection and is used to push messages from a session to a WebSocket client (see figure 2.2) , can a dedicated virus/content scan ID for outgoing messages be maintained.

Since the AMC producers and consumers, besides the collaboration scenario, resides in an ABAP session, the existing ABAP supportability tools, e.g. debugger, ABAP runtime analysis or kernel trace can be used. Within the debugger the session breakpoints can be used to debug the session during send or receive phase of the messaging. Using transaction SAT the runtime analysis for the respective session and report can be activated. Via transaction SM04 you can activate and deactivate the user specific kernel trace for the respective session.

Furthermore with the following transactions you can manage the AMC logging (activate, deactivate and monitor recorded entries):

Note: For the reorganization of AMC log entries a dedicated batch job has to be planed. The pre-defined standard batch-job SAP_ABAP_CHANNELS_MANAGEMENT has to be scheduled in the transaction SM36. The batch-job requires the authorization for the authorization object S_AMC_LOG with the activity “Delete”. From release 740 SP09 is the estandard job SAP_ABAP_CHANNELS_MANAGEMENT not available anymore and the planning should be done via transaction AMC_LOG_ADMIN. For detail information refer to note 2043894.

The transaction „SMAMC“ (see figure 4.0) shows the list of the AMC channels (in our example the channel yamc_test/ping) which are registered in sessions (Type “Session”) or in case of “Collaboration scenario” the WebSocket connections (Type is “WebSocket”) in the system as AMC consumers.

The present implementation of AMC supports only the best-effort strategy without guarantee of delivery. We could think about providing also reliable messaging in future release.