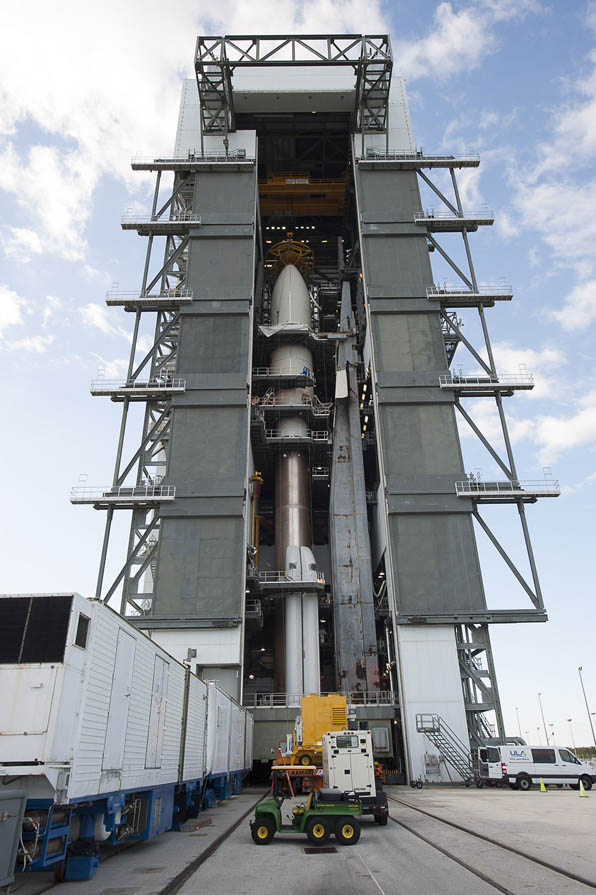 “T-minus 3 … 2 … 1 … lift-off!”, will soon be heard from Cape Canaveral as the United Launch Alliance (ULA) prepares to send an Atlas V rocket on a mission to space for the U.S. National Reconnaissance Office (NRO). The launch, tentatively scheduled for no earlier than March 27, is in support of national defense.

Mission details for NROL-67 are classified but the powerful Atlas V-541 rocket, which stands about 19 stories tall and produces greater than 2 million pounds of thrust at launch, will likely place the NRO spy satellite into geosynchronous orbit about 22,300 miles above the Earth.

Assembly of the two-stage Atlas V, with its four strap-on boosters and the NRO payload, began February 7th in the 30 story vertical integration facility at Cape Canaveral. On Friday, March 21st the launch readiness review team gave the mission two thumbs up and on Monday morning the rocket began its very slow journey from the assembly building to the launch pad. Huge rocket movers carefully haul the 1.4-million pound mobile launching platform on rail tracks to its final blastoff destination.

The Atlas V, which debuted in 2002, was designed with a new and innovative rigid body common core booster. The common sized booster is used across all variations of the Atlas V family giving it a much more flexible and robust design than its predecessors. The core booster stage is 106 feet long and produces 860,000 pounds of engine thrust throughout launch. Up to five additional solid rocket boosters can be attached to the side of the core booster for extra power during liftoff. Each solid rocket booster is 67 feet tall, weighs 102,000 pounds, and generates approximately 400,000 pounds of thrust in a 90 second burn. Two different sized nose cones are also available to enclose various sized payloads.

Formed in 2006, Denver based ULA is a 50-50 joint venture between Lockheed Martin and The Boeing Company. For more than 50 years the Atlas and Delta expendable launch systems have supported America’s presence in space. NROL-67 will be ULA’s 80th launch overall and its third this year. A similar configuration of the Atlas V was used to launch NASA’s Curiosity Rover to Mars in 2012.

“Launch day is an awesome sight,” said Michael Gass, President and CEO of ULA, during an interview with SAP. “But it’s also a reminder of how many people and how much effort it takes to get there”. ULA relies on software from SAP to keep its operations and rockets running smoothly – and enables agencies like the NRO to keep us safe at home.

SAP and ULA teamed up to deliver the SAP North America Aerospace and Defense Innovation Days event in Cape Canaveral, FL, March 24-26. For more about the event, click here.

And to see how ULA sends missions into orbit check out this cool ULA Run Better video.