The statistics are sobering.

57 million children are not in primary school, and 49% of them will probably never set foot in a classroom during their lifetimes

In 10 countries, 90% of the poorest young women have not even completed primary school

With daily life struggles ranging from access to clean water to lack of electricity impacting young people’s ability to gain access to education, tackling this challenge might seem an intractable problem. But SAP co-CEO Jim Hagemann Snabe and a group of leaders representing global corporations and NGOs think otherwise. They put forth their bold ideas and views on March 17 during the annual Global Education & Skills Forum 2014 event in Dubai, which also featured a keynote by former U.S. President Bill Clinton.

The Forum’s organizers and sponsors want to take immediate action to get the private sector to work more closely with the public sector, and  the 850 world leaders, government ministers, business leaders, and education representatives gathered in Dubai set themselves the task of openly discussing ways to tackle this global crisis. Jim was one of five panelists who participated in a panel discussion under the rubric “Business Backs Education”, and was joined by the following leaders:

SAP drives education-related programs and initiatives in over 35 countries, touching almost two million students today and positively impacting the lives of an additional one million young people and budding entrepreneurs. Jim wasn’t just an attendee and participant; along with Majid Jafar, he will be co-chair of the new Business Backs Education initiative launched in Dubai. 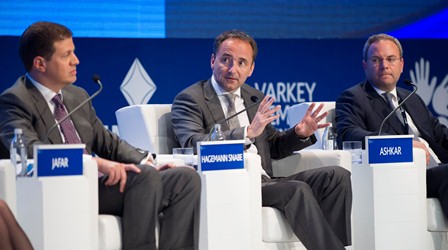 During the panel discussion, Jim expressed a number of clear-eyed views on the ever-changing landscape we all inhabit in today’s world. “We are facing a future of rapid transformation, which creates something of a technology paradox: technology is forcing re-skilling while at the same time providing opportunities for companies of all sizes and from all industries” he said, adding: “It’s critical that access to knowledge is provided to everyone in the world. That’s why we’re engaging: we can no longer wait for traditional approaches and systems to solve these problems. Partnership between the public and private sectors is needed to develop the skills of the future.”

“Radical changes are happening in all industries, while at the same time the world is facing such extreme challenges as resource scarcity. We need young people who have the best and most radical ideas to solve these challenges. With technology, we can bring these young people into the fold at almost zero cost.” With an eye towards shifting the gender imbalance within the technology career landscape, Jim added: “And we want to see more women in the IT sector, so we have to do what we can to inspire them while they are still young schoolgirls”

Bridging the education gap through engagement…and a little match-making

When asked what SAP is doing to bridge the skill gap, Jim cited some key programs underway which have already shown strong results.“There are many good examples where SAP launched skills programs in Africa and the Middle East – regions which are in fact the fastest growing in the world. SAP Skills for Africa is one we launched last year. SAP also offers an online collaboration platform at the national level across the Middle East called GENIE (Government Enterprise National Initiative for Employment) In addition to bringing job seekers and employers together, GENIE helps small and medium-size business owners and entrepreneurs to get access to mentoring, technology, and funding. And importantly, this platform provides the latest statistics to help decision-makers within government agencies to match the education offerings with current market requirements.”

According to Jim, SAP has an advantage in that there are already scores of start-ups building on our SAP HANA technology. “These people have the wild new ideas and we offer them the education, infrastructure, and our ecosystem to make their visions a reality and to scale their ideas.”

He was quick to point out that “if business doesn’t come on board, transformation simply takes too long and we will have lost opportunities. In Europe we have an estimated 400,000-500,000 unfilled jobs in the IT sector, yet unemployment among young people remains a major problem. One effort SAP launched that aims to fix that is Academy Cube, which aims to bring jobs to 100,000 young unemployed people across Europe.” Like GENIE does in the Middle East, Academy Cube also follows the tried-and-true “match-making” model, which connects job seekers and employers. 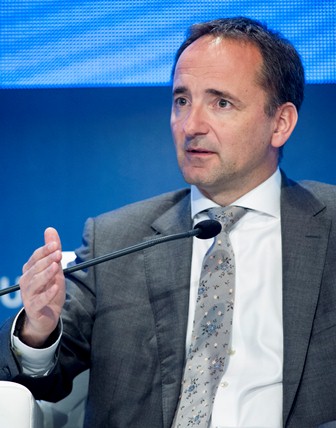 How to fund such bold plans was another topic of discussion among the panelists. Jim had much to say on the subject, and stated that technology presents an unprecedented opportunity to help deliver education at zero cost. “Investment challenges will always remain, but funding depends on the cost of delivery. In the past, education was an expensive proposition – you had 20 people in a classroom with physical materials. Now we have the broadest collection and fastest delivery of human knowledge in the internet, doubling every 18 months. With technology, we have a delivery mechanism which will take costs down to zero.”

“SAP has had great results in universities with e-learning: one training class with 30,000 students from all over the world and 2,500 graduates. Thousands of students are already connected to each other through technology. At the same time, technology can help to personalize knowledge through such efforts as online testing which are much better geared towards individual requirements.”

“We are fortunate to be business leaders in this time of radical change, but our good fortune comes with the responsibility to look beyond immediate financial gains and see how we can positively impact the world. Many unemployment problems could be solved if we enable people to create their own jobs or start-ups. Big companies can help here in a significant way, and then we can collectively contribute to a more sustainable world and work towards solving other pressing resource problems such as access to electricity and clean water.”

For panelist Irina Bokova, Director General UNESCO, Jim’s comments were “music to my ears”. She added that the benefits of this approach would have “an impact on all aspects of sustainable development. We want to share this effort with the private sector – not public, but private and civic, individually – with everyone coming together and collaborating.”

Panel replay and other resources

A replay of the panel is now available on YouTube. To learn more about what SAP is doing around the topic of education, see the blog posts and resources listed below the video: