BI 2014 Design Studio and Dashboards – Looking to the Future

SAP said Xcelsius has drawbacks. It started as an end user tool, click, drag and drop – easy to use; users wanted more.  As user needs to change, tool became sophisticated. Sophistication = complexity.  Tool has a good user experience but not enough for IT – design becomes more complex.

With “Agile visualization” users are empowered to tell their own story.  With self service they can consume data that they need “on the fly” 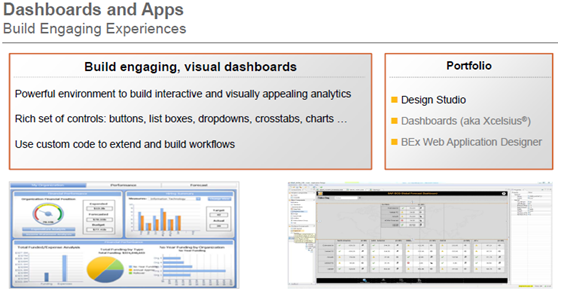 As Figure 1 shows you move from static view on left to applications on the right.

With Design Studio there is “Less limitation on pulling back an entire dataset, custom branding and styles”

The application side is for customization

The upper right of Figure 1 shows three areas in portfolio

They also said “this is not end of life for Xcelsius”

Why so many tools? Through acquisition

SAP BEx Web Application Designer is tied to BW; it could handle massive amounts of data.   It does not have ability to create compelling visualizations

SAP needed the technology to mobilize Flash, and performance with BEx WAD 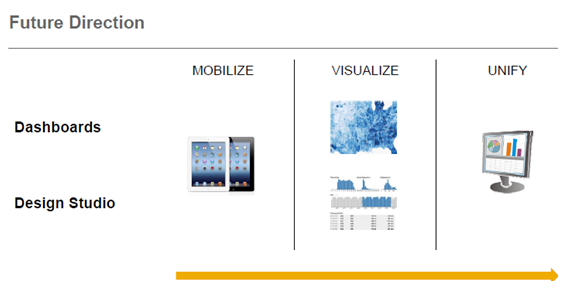 SAP then introduced Design Studio for BW and HANA.

Not every component is mobilized in XCelsius

Today we are In the Visualize stage, of Figure 3.

The future is one tool for building a dashboard but it is not Lumira, not self-service

There are “No plans to end of life Xcelsius but it will be put into maintenance mode at some point”.  Updates to BI4.1 will protect it

SAP “does not want anyone to abandon investment made”

Now focused on tablets and phones because you don’t interact with phone like tablet.  Phone is small and form factor and interactivity

Design Studio includes universe support; it is a different approach than XCelsius

SAP said to “think about long-term ramifications of this; XCelsius relies on Excel – do not want to bring in a lot of data and calculations due to speed” 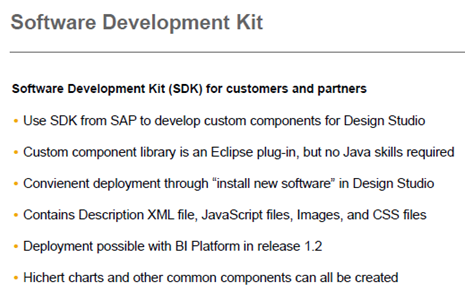 If you don’t want to create SDK, talk to partners

Another partner is doing geomapping 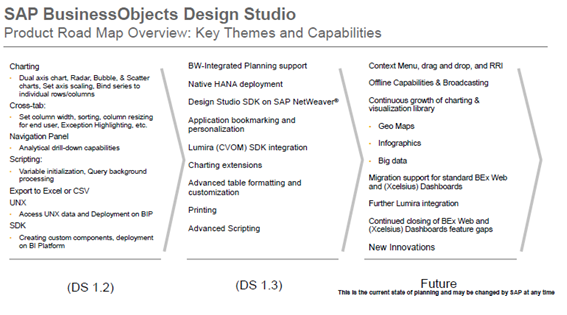 Middle column is what is planned for 1.3

Third column is for inclusion in later release

Note that this is the current state of planning

With 1.3 it includes planning for BW and write back

Support is planned for Lumira visualizations

Version 1.3 will have application bookmarking and visualizations – work with data, analyze it – “come back to where you were” – capture as a URL to send to your team

Design Studio 1.3 has a Fiori-style dashboard

For the BW side includes RRI support, with interactivity features from BEx WAD – closing the gap

SAP plans to offer offline views, migration tools, improve interoperability with Lumira.  This includes building apps from Lumira Data Sets, building a Design Studio app from a Lumira Storyboard.  This does start to blur the line for self-service & dashboarding & apps

Dashboarding Strategy and Statement of Direction

Executing on the Statement of Direction

Towards the we ran out of time to cover this but it is an important slide.

SAP BusinessObjects BI 4.1, SAP BW, and SAP BW on HANA – All in One Day June 2nd

This is a very timely post and certainly provides more clarity around the points raised in the recent What is the future for Dashboards discussion.  Thanks for the detailed write-up.

I do have one question, more out of curiosity.  You mention that "Design Studio 1.3 has a Fiori-style dashboard".  Can you shed some more light on what we can expect?  Does it mean that the standard Design Studio components will all be styled according to the Fiori look and feel, or is there going to be an entirely new dashboard component with the Fiori look?

Mustafa - great question, but unfortunately the session didn't get into those details.  To me it looked like the Fiori look and feel

Thanks for the info!

did they mention how the consolidation of the Dashboard tools is supposed to take place? I only read it will be" one tool for building a dashboard but it is not Lumira, not self-service". Did they shed more light into what that they actually plan?

Unfortunately the session ran out of time and there was no time to get into those details.  Later in the week at BI2014 they said we would hear / learn more later in the year (likely after Design Studio 1.3 release - my guess only)

I hope to learn more at ASUG Annual Conference in early June as well.

thanks for all that information.

For me it's not clear enough, on how to bring the BI data (design studio) to the enduser.

Is there a way, to integrate it as a Fiori Tile?

We have rolled out Fiori and now the users ask how they can access all their BI-reports.

Hi Marius - I am not a Fiori expert but you can experience Fiori with BI by trying it out in the SAP CAL Library free trials like I did here ERP on HANA Trial Experiences - includes BI, Fiori, Lumira Server and More

I know Lumira integrates with Fiori

thanks, will try that out...

do I understand it correct, that design studio creates an iview?

do I have any other options? like plain HTML5?

The future is definitely unification and I agree with SAP to simplify the tools.

BTW Is there any info how to migrate from WAD to Design Studio?

Is a mass conversion of WAD templates possible?

We are planning to migrate SAP WAD templates to design studio. Is the feature of conversion available from 1.5 version onwards? Can you please let us know?

Laxmi - please see the latest roadmap at service.sap.com/roadmap - conversion is not planned