Week 4: The Time of the SAP HANA Trainer

It was a busy weekend. Traveling back home from Berlin. Quickly unpacking, doing the laundry and checking in for my flight to London. I would loved to have an Tardis right now! With the Tardis I could have traveled in a few incomplete time loops to get things done in parallel. 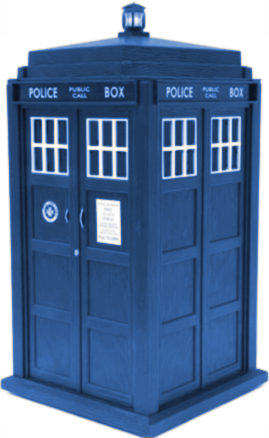 … incomplete time loops to get things done in parallel …

… incomplete time loops to get things done in parallel …

The flight to London was smooth. We left Schiphol with a clear sky during the sunset. A deep orange glow from start to landing. Beautiful!! The SAP UK building is very close to London Heathrow Airport and the hotel were I stayed. This time I couldn’t walk the distance between hotel and SAP UK. The nearest hotel was still a 10 minutes drive. Luckily the hotel had a shuttle service to SAP.

Luckily the hotel also just ran out of adapters, so with 75% battery life and so I have to come up with a plan. Switching the laptop power usage schema to “Extreme Low Power Consumption”. That gained me an hour. With this I could do all the preparation on the servers so that the WNLHD7 will start with no glitches.

When I arrived at the SAP UK building I was impressed. A huge building and SAP Education has it’s own private entrance. 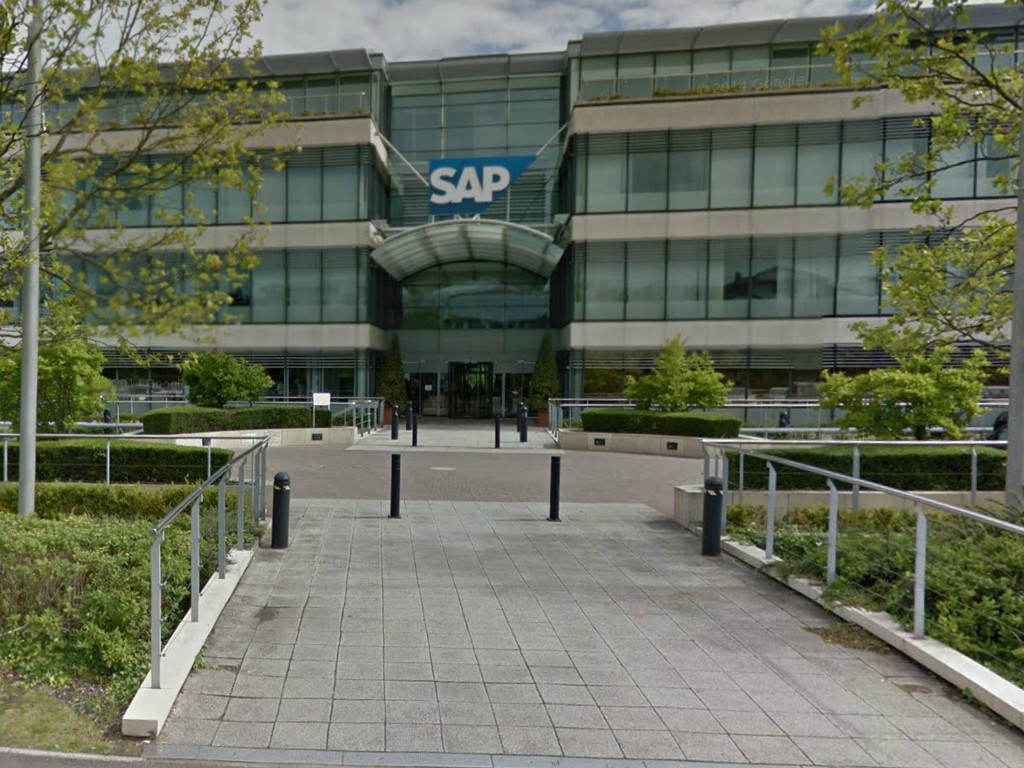 At SAP Education UK I met almost all my UK colleagues from the CoEE. That was nice, because placing face to the voices in a virtual team is always good.

Even with the busy traffic around London and Heathrow all 10 participants were on time. During the introduction round I had participants from customers, two hardware partners and two software partners. One participant worked for an company were I trained their full IT in SAP HANA last year. Back then I was told that a few colleagues stayed behind to look after the SAP systems. Now Stan was allowed to go the SAP HANA course and the whole team had to stay behind to look after the SAP systems.

For the second day we had patching on the schedule. The SAP HANA system were patched to revision 72. Also the SAP HANA Studio was patched using the update website technique. During all this hands-on we also had time to have a good look at the theoretical lecturers. All this knowledge is needed for the C_HANATEC131 certification attached to this workshop.

On the third and last day we worked through the topics on Backup and Restore, High Availability and Disaster Recovery. These are always very interesting topics as they are not only on SAP HANA but also the whole infrastructure in the different data centers.

One of the exercises is setting up SAP HANA System replication between two systems. This demo is normally a walk in the park, but this time I had a nice challenge for myself. I had two systems with the same SID and instance ID, but with different patch levels. This should work, but I never tried this before. The participants challenged me that I would like this challenge. And of course I do like living on the bleeding edge so I took the challenge.

So I setup SAP HANA System replication from a system with rev70 to with rev72. And it worked without any problem. I didn’t expect it to fail, because this setup was almost the same as the Zero Downtime Maintenance scenario introduced in SPS07. Using the SAP HANA Studio I managed to setup the System Replication and performing a take over in a few minutes. One participant was extremely impressed because he had been working on this over the last few weeks and then I show him how to do it in just a few minutes.

In the afternoon the group was ready for the certification. Because it’s becoming an tradition we first made group photo. So here you see the British delegation of SAP HANA Guru’s. 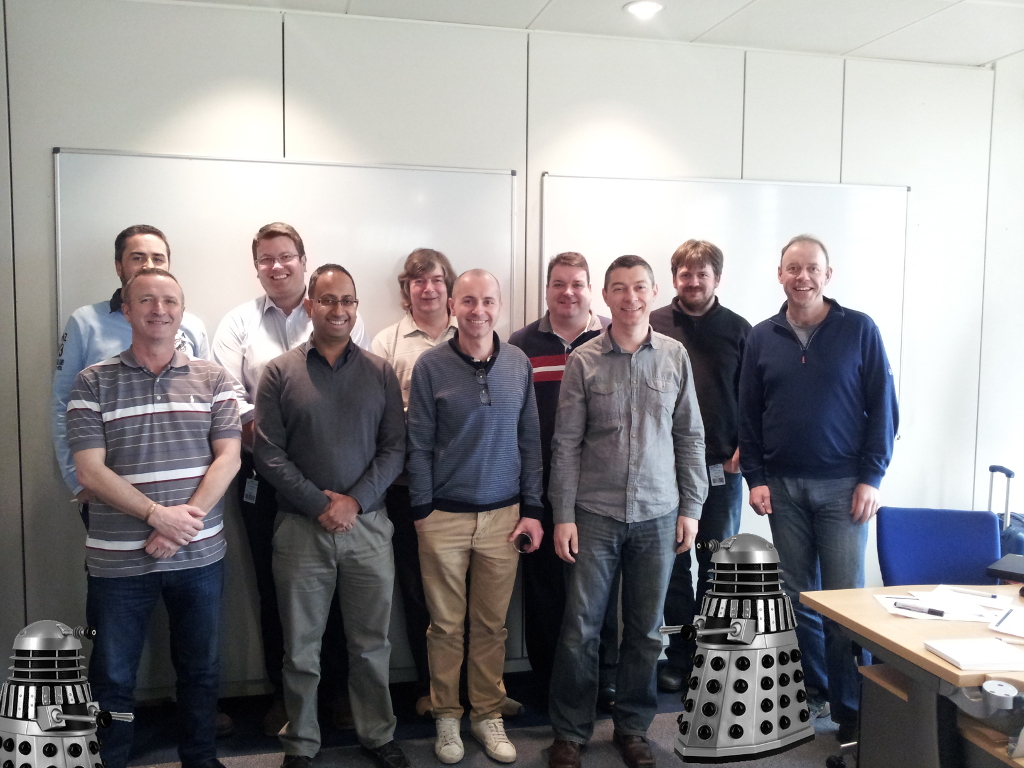 When writing this blog and looking at the photo I noticed something strange!! Looks like we have our aliens in the picture 🙂

You were are super group. Good question and discussion on SAP HANA and the surrounding areas. It’s always the interaction between the participants and the instructor that makes a course so interesting. I really enjoyed it. Thanks for the great class.

I traveled home with my interstellar suitcase (yes I’m really happy with it). 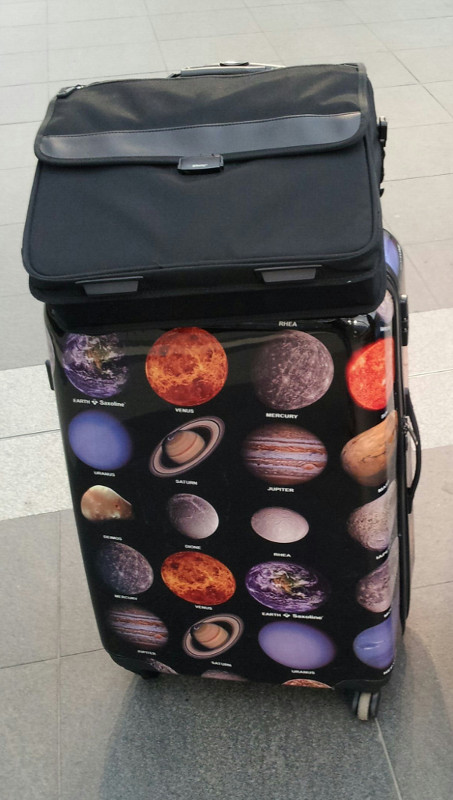 Next week I will be teaching again at SAP NL. Exited to see all the NL colleagues again after three weeks on the road. It feels like returning home after the summer holidays or “Urlaub” as I learned from Stefan Fell during my stay in Berlin. Even the weather was great during all the trips.

If you have missed the other blogs then you find the below:

The rest will follow in the next few weeks.

Great story...and I recognize those Daleks "exterminate"!  I only know that because I gave a talking Dalek as a gift to my 12 year old nephew last month...:)

Looking forward to hearing your NL adventure next.

Already have some nice pictures. There were some SAP Mentors in the SAP NL building this week.

Dr. Who references! 😎 But don't take the Tardis for time traveling, if you don't have to. It's got a mind of its own and won't always bring you where you wanted to go. You were lucky to get back to the right time (and space) to fly into that sunset and have the replication challenge waiting for you. 😉

All this reading about installations and stuff makes me miss those things alot. *sigh*

I know, I was lucky. The Doctor gave me good instructions, so I only had to try twice 🙂