Tahir Hussain “Bob” Babar from the SAP HANA Academy details two methods for establishing ssh connectivity to the SAP HANA One Linux server. Note that SAP HANA SPS7 is required for the HANA Live2! course. To view all of the content and links for the course please visit the HAHA Live2! Project Overview.

Installing and Connecting with PuTTY:

Bob wants to establish an ssh connection with PuTTY and walks through how to download PuTTY and connect through PuTTY in 9 steps.

Connecting with a Java SSH Client:

Bob wants to connect to his SAP HANA One Linux server using the Java SSH Client in AWS and shows how to in 5 steps.

Stopping and Starting the Server:

Bob wants to stop and start his servers and explains how to in 3 steps.

Bob’s tutorial video details how to establish a ssh connection to the SAP HANA One Linux server using either PuTTY or Java. 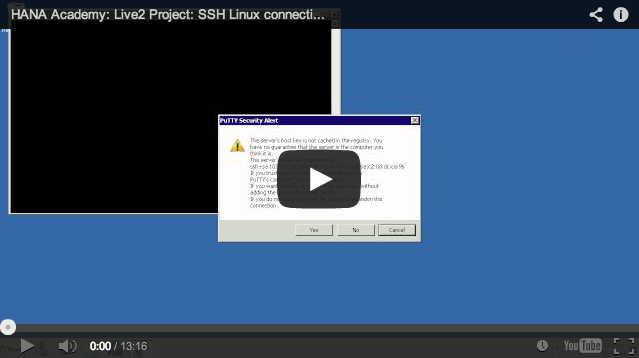 View other tutorials on the HANA Live2! Project at the SAP HANA Academy.