I’m a little late in posting this but I finally made it to Bangalore, for SAP TechEd in December. I’ve been to other parts of India, but never Bangalore. Everybody told me it would be unlike anything else I’ve experienced in India, and they were right. It was exciting and exhausting.

India’s national tourism slogan is “Incredible India.” Nowhere is that more applicable than Bangalore. To start with, wherever you land, it’s at least two hours to where you want to go, no matter where it is. It just takes that long because the infrastructure isn’t there. One day, I spent 11 hours to go to two one-hour meetings.

On the way to TechEd I got stuck in bumper-to-bumper traffic. This is not like a traffic jam on the freeway in L.A. 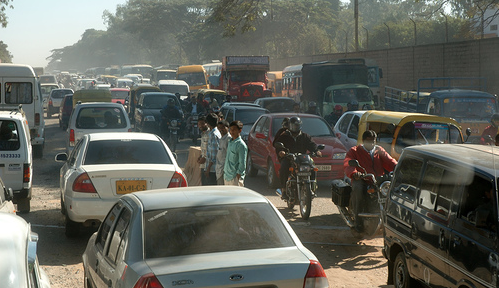 I’m in my business suit, in a taxi, looking out at the glittering, glass office towers of the technology companies here. We’re sitting on a roughly paved road with one, sometimes two lanes in either direction. It’s jammed with vehicles as far I can see. There’s a motorcycle inches from my window. I can see the driver and the passenger on their mobile devices texting or doing email. I can almost read what they’re typing.

A cow is crossing the road in front of my taxi. A man with a pushcart is selling pineapple to people in the stopped cars. An old lady is dragging along a pallet on wheels loaded with five-gallon buckets, presumably of drinkable water. We’re all traveling this road together. It’s an amazing mix, all happening so fast and at such a large scale, it’s mind-boggling.

The SAP campus here is sprawling, with a big garden with trees and birds and grass around the buildings, more like something you’d see in Silicon Valley than a typical campus in India.

There is a lot of innovation coming out of SAP Labs India right now. At TechEd we announced one new product, Ganges, a retail solution that in my opinion could be a game changer for India and many other countries in Southeast Asia–more about that later.

My role at TechEd was to help tell the innovation story, to help people think differently about SAP. SAP is 42 years old now. For the first 35 years we did 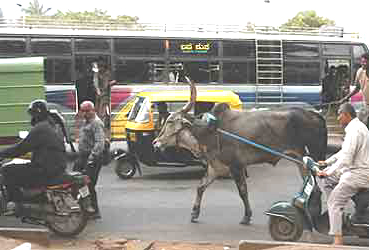 ERP and became rather well known for it.

Not everyone has caught up with the transformation that’s been taking place during the past seven years, what it mean for our customers, partners and prospects in India and around the globe.

The event opened with the Partner Innovation Summit. There’s a big opportunity for partners here. We’re looking to co-innovate, mixing their intellectual property, thought-leadership and local market knowledge and with our technology to create solutions for the local marketplace. That’s important here because if you’re not sensing it already, India is a world unto itself.

If you need more evidence, consider my experience with the Partner Innovation Summit. It was scheduled to open at 9:30 am with my keynote. That means people have to leave home at 6:30 or 7:00 to make it.

While they were dealing with the chaos of getting there, a new Incredible India experience was unfolding at the venue. Apparently the previous occupant of the venue had a party that ended at 3:00 a.m. So, when I get there at 8:30, it’s pandemonium. The cleaning crew is getting rid of the evidence of the party while other workers are wiring the room for a high-tech business conference, with WiFi and flat-screen TVs everywhere.

I go into the bullpen for my dry run, but they’re not ready for me, which throws everyone into a panic because I’m pinch hitting and I was just handed the presentation the night before.

Twenty minutes later, they get me on stage for a sound check. There are supposed to be two monitors, one showing my presentation, and one showing the note slides, which I really need.

But, there’s no way to connect to the projector and there’s only one TV. I’m asking everybody, understanding, reconfirming. WhileI’m reconfirming, they’re building it all, giving new meaning to the term real-time.

The whole time, I’m thinking, “If this was any other place in the world, people would be in a sheer panic.” The organizer, clearly a local, did a phenomenal job. I kept seeing her, and reassuring her, “We’ll be fine, don’t stress.” She’s said, “I’m not stressed. This is just how it is and we just persevere.”

What SAP Ganges could mean for India

I’m telling you this is so you have the context to understand what an SAP solution like Ganges could mean for India. India is has more obstacles to living 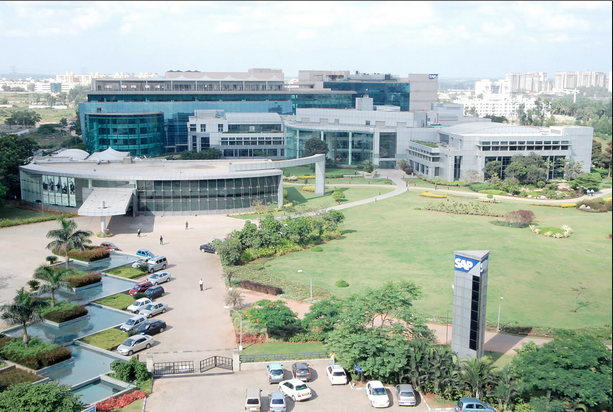 daily life than any place I’ve ever seen. If I were at an SAP facility in Palo Alto and my conference call line dropped, people would hang up the line in about 2 minutes. If the office Internet went down, everyone would pack up and go home. In India, it’s, “Okay, we just have to work through it.”

How many of us stick our toothbrush under the faucet and just run the water? This is not what the lady pulling the water down the road is dealing with. The people here don’t necessarily accept these obstacles, but they don’t rail against them either. They just persevere. There’s a determination not just to survive but to thrive in spite of it all.

That’s why it’s significant that Ganges was developed in India, by and for Indians. This was not product management in Waldorf or Newtown Square telling the engineers to develop something for India. I would venture to say that no one outside India could grasp the challenges here. Ganges came from the local team saying, “This is a real problem,” and working to solve for it.

The problem is this: Forty percent of the world’s retailers are in India. We are not talking about grocery chains, department stores or big box retail; there those here but mom and pop bodegas make up most of the retail economy. Here they’re called kiranas and they are everywhere. Running them is the livelihood millions of people.

Given what I experienced during my brief visit, you can imagine the challenges the kirana ecosystem–manufacturers, distributors and retailers–faces. Logistics consume a huge amount of bandwidth, let alone having a handle on inventory, pricing and profitability. What record keeping there is is paper-based.

Ganges was two years in development. The team interviewed hundreds of retailers and distributors to make sure that they got it right. For example, there are a lot of different languages and not everyone can read so you have to have pictures to identify all of the items.

Ganges will bring information to this sector at a price point that is affordable. There’s even hardware that goes with it. It’s about as different from our traditional ERP offering as it gets.

It’s is really the start of something much bigger, because information captured by the system is fed back to the distributors and CPG companies. We’re building a data set that they can leverage, and that we can leverage to build more solutions. The end goal is creating a whole stream of information and improving visibility for the benefit of the whole ecosystem.

But the first thing is cash-flow management, inventory, profitability–things, which are near and dear to the shop-owner’s heart. In developed countries we take it for that there’s a POS system. The customer buys an item, the barcode is scanned and you can find out all the information about that transaction.

India is so far removed from that. When you really start thinking about the fact that forty percent of the world’s retail distribution points are in India, that’s a gaping hole in your distribution network where you just have no visibility.

Of course there was a lot of information at TechEd about cutting edge technologies such as machine learning and the Internet of things. But it was Ganges that captured mine and everyone else’s attention.

In tech we tend to think the whole world is connected just because all these people have mobile devices; you see them here as much as anywhere. But there is so much of the economy that really isn’t connected and doesn’t have even the most basic productivity tools.

To give you another example of that, SAP created a solution for the Indian government to solve one of their biggest problems: Not everybody has an identification number, or a driver’s license, or any other kind of documentation, so they don’t really know what the population is. If you think about the U.S., where we do a census every ten years that helps the government identify population trends and plan for coming needs, you can see how solving for this would be foundational.

We’ve helped the government build a system to generate a unique number and gather census-type information about people. This has huge implications, for tax revenues, for healthcare, for education, for infrastructure.

Yes, these are India-specific solutions, but the scale is absolutely enormous. The impact could be transformational. And it’s not limited to India—these mom and pop kiosks are a big part of the economy in Indonesia and the Philippines too.

Watching people overcome these incredible obstacles just to put on and get to a conference, I can’t help but imagine the potential that could be unleashed by even small improvements.

That’s what excites me about India. It’s like nowhere else I’ve ever gone, and even though I’ve been traveling all over Southeast Asia for two years now talking about how SAP is innovating with local partners in the region, my visit to Bangalore gave me an indelible glimpse of what the impact of all this innovation could be.

This article previously appeared on kurtbilafer.com.