Nominate the Next SAP Mentor Spring 2014

Please nominate that extra special SAP expert who works tirelessly and selflessly for the SAP community’s betterment to become an SAP Mentor.

Being an SAP Mentor will give that SAP expert more opportunities to make a bigger dent into the SAP universe.

Before you choose your nominee, check out the SAP Mentor Magic Foundation document to ensure you understand the traits that lead to magic: Lead by example, Passion, Constructive in Your Criticisms, No Culture of Entitlement and Inclusion.

OpenUI5 is one example where SAP Mentor’s magic shined in 2013. For years different SAP Mentors have hammered away to make the life of an SAP developer easier. Whether fighting for better developer licenses or for easy downloads and access to SAP systems. We have been successful, just listen to Jim Snabe thanking SAP Mentors for their part in making HANA for developers freely available in the cloud.

Throughout 2013 the SAP Mentors were nudging SAP on a different developer related topic: “SAP has this great UI technology with SAPUI5. Make it available to a larger audience. Open source it”. Turns out, that a similar push came from within the ranks of SAP employees and without this background commitment from the internal development it would not have happened.

There were many meetings with executives up and down the SAP organization via webinars and especially during the SAP TechEds in Las Vegas and Amsterdam, where UI5 was frequently discussed. It was one of the strongest signals from these meetings.

Once back, the SAP Mentors made the case:

Check out the comments with great input from many SAP Mentors as well as SCN community members.

There was so much activity, that I am sure I am missing important people and events. Please post and link to them in the comments section.

I was privy to some of the discussions within SAP and even on the evening of SAP TechEd in Bangalore, it was still not a done deal.

Update: Improved picture of the announcement.

Below the picture I took with my phone. 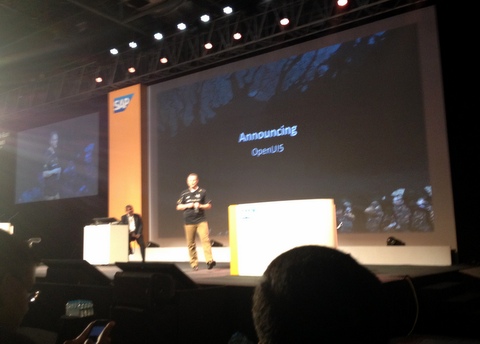 Much better picture of Michael Reh on the keynote stage shot by Jansi Rani Murugesan Thanks! 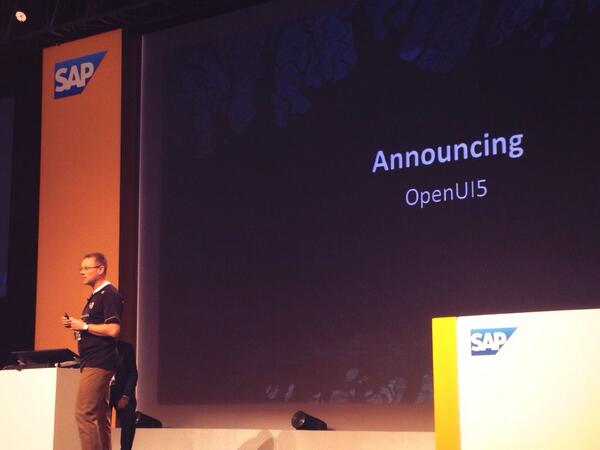 But then during the SAP TechEd Bangalore keynote the next morning Michael Reh announced OpenUI5. Rightfully wearing his honorary SAP Mentor shirt.

I was shaking with joy as you can see from the picture I took, or I am just a lousy photographer. 😉

SAP Mentors are working with SAP to ensure that OpenUI5 is a success. Just check the activity regarding OpenUI5 in StackOverflow. OpenUI5 this year is the cornerstone of the outreach to developers beyond SAP.

This OpenUI5 example showcases the SAP Mentors at their best. They see an opportunity and work on all levels to improve SAP for the betterment of the entire SAP community.

Folks with fire to engage with the SAP community, the passion to collaborate and co-innovate with SAP and being a advocate for the SAP community even beyond SAP those are the ones that you should nominate to become the next SAP Mentor. Do it now!

Next to the great work the mentors do for Developer relations, they also do a hefty job in a couple of other key areas:

And not to forget, some notorious alumni/troublemakers, who regularly stirr thing up and for SAP to come with a proper response 😉

Next to the great work the mentors do for Developer relations, they also do a hefty job in a couple of other key areas:

And not to forget, some notorious alumni/troublemakers, who regularly stirr thing up and for SAP to come with a proper response 😉

You are so right. I actually pinged folks to inquire whether this post is too OpenUI5 focused. SAP Mentors do much much more. Thanks for spelling it out. OpenUI5 is just the best example for all kinds of SAP Mentor activity with SAP taking up the suggestion and run with it. More to come.

I actually had about 3-4 people come up to me at HR2014 in Orlando and ask what/how they could get nominated to be a Mentor.....so people are interested and aware. Nice to see all the efforts getting notice now.

Thank you for driving this Mark.

SAP Mentor nominations are such a nice opportunity to extend our appreciation to great SAP professionals.

You've now got my nomination.

Mark, on the application, it says that you are collecting only until the end of March.

I was informed of this by a couple of people who were going to nominate me, but I see this was posted on the 21-Mar.

Is there any possibility that the deadline can be extended to allow for at least 1 month of applications? (to mid-April, for example)