Talking Technology and Indian Food on the Streets of Boston

Previously I wrote about how technology brought new meaning to the term “Boston Strong.” In that blog, city officials talked about the success of their analytics-based Problem Properties initiative and the Boston About Results Web platform that gives citizens instant insight into the city’s performance. 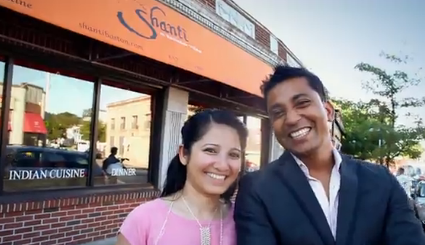 But perhaps the best examples of technology’s positive impact on the citizens of Boston can be found in the stories told on neighborhood streets. Stories like that of restaurateur Solmon Chowdhury.

Boston has a vibrant restaurant scene. From up-scale eateries to funky sidewalk bistros, these businesses help define the culture and identity of the city’s many distinct communities.

Solmon Chowdhury and his wife had their eye on a property in Boston’s Roslindale Village for some time. “We always wanted to open a second location here,” says Chowdhury. “There wasn’t an Indian restaurant in this neighborhood, and we thought there was a huge demand for it.”

The couple’s culinary vision is based on traditional tastes, fresh ingredients, and local produce. But before the residents of Roslindale Village could start enjoying authentic goat bhuna or mixed vegetable pakoras, the Chowdhurys needed the proper permit and licensing to open their new Shanti restaurant.

And let’s face it, the permit and licensing process can be a nightmare for the small business owner.

But a visit to the City of Boston Web site proved to be exactly the start these entrepreneurs needed. Chowdhury entered some information online about the business they wanted to open. The very next day he received phone call. From then on, city personnel guided the Chowdhurys through the entire process – permitting, hearings, and licensing.

“We were actually shocked how quickly the whole process took place,” says Chowdhury.

This kind of effeciency is no accident.

Boston has revitalized its Permit Division with analytics technology that includes the SAP HANA platform and the SAP Strategy Management application, simplifying the way they access and use data to make it easier for citizens to get what they need.

Devin Quirk, director of operations at Boston’s department of neighborhood development, explains why, “We wanted to conduct our plan reviews with greater consistency and issue the permits and licenses to our citizens faster.”

And that’s exactly what happened.

Quirk reports that within six months of using analytics across the permitting workforce, the average time it took to issue a permit dropped from 40 days to about 15. And what was once a backlog of some 600 overdue permits in the system has been reduced to just a few.

“Before there was just too much data for us to put into one place,” says Quirk, “We would have to do analytics in disparate systems, and then bring it all together after the fact.”

Not so now. As Quirk notes, “With SAP HANA, we can put everything together in one place and have a much more comprehensive picture of what’s going on in the city.”

The Best of Boston

The Chowdhury’s now have two Shanti locations in the City of Boston, and their food is receiving rave reviews. Boston Magazine even once named Shanti the city’s best Indian food. “We sell a lot of chicken tikka masala,” says a smiling Chowdhury.

Stories like the Chowdhurys’ are representative of what is happening in neighborhoods all across this successful city.

Individually, each person works hard to build a business, a home, a family. Collectively, they build a community.

By harnessing the power of technology, SAP is determined to overcome complexity in business, our jobs, and our lives. Please click here to learn more about our Run Simple principle.

For more information and personal stories about SAP HANA, please visit IT & Me.

Watch this video about how the City of Boston uses SAP HANA to put research into the hands of the right people to improve citizens’ experiences with the city.