We receive many questions from customers about how to optimize the performance of their SAP Screen Personas systems. The good news is that there are many ways to tune performance to render screens quickly. The challenge is that many factors influence performance, so there is no universal answer. You will need to examine your user requirements, business scenario, specific transactions, and screen elements, in that order. 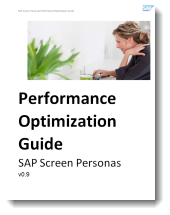 Some of the factors that affect performance include:
• Amount of information on the screen
• Data and data volume
• Caching (pre-fetching of data) of tabs and/or tables
• SAP/ITS/Infrastructure

To help you obtain the best performance from SAP Screen Personas, we are working on creating a Performance Optimization Guide. Here is a preview version. We welcome your feedback – both your tips for improving performance or any areas we might have missed in this preliminary edition.

For comparison purposes, the benchmark you should be using to measure performance is comparing SAP Screen Personas screens to the unmodified transaction in the Web GUI. This will provide a direct comparison since both Personas and the Web GUI use the same communications protocols and retrieve the screen definitions from the same place – the Internet Transaction Server (ITS).

We are attempting to do Performance Testing on SAP Personas. For that end, we are trying to create some script using LR. However, there is a parameter which seems to contain some session information and we have been unable to locate it on the server response in order to correlate it.

This is the parameter I am referring to which appears on the LR recording:

At this point, the script fails with a HTTP 400 message.

I found certain similarity between the string above and the one on included on a cookie, almost at the start of the recording:

Notice how from the strings match on 40+ characters...

As for the other part of the sting, it does not appear anywhere on the server response.

Any ideas would be greatly appreciated!