And So It Starts

Monday afternoon, 10th of March 2014, saw tens of students from all over the world pour in Bed n Budget, a hostel not too far from the Hanover fair grounds. Boys and girls wheeled their carry-ons in the reception area, some with tired faces from long plane flights and longer train rides, but most had a sparkle of excitement in their eyes. Some early arrivers had already gotten the hang of the WiFi system, parked themselves behind their laptops and indulged in a Skype conversation with their friends and families, excited to have started the InnoJam journey. The students were given the evening off to relax, sight-see and mingle while the organizers prepared the room rented out for the event on the second floor of the Convention Center located in the heart of the Messe. The room was fenced with floor to ceiling windows leading to a terrace circling the entire floor, later giving the participants a nice breathing area, to clear their heads, sip on some coffee and get the boost they needed after sleepless hours of coding. 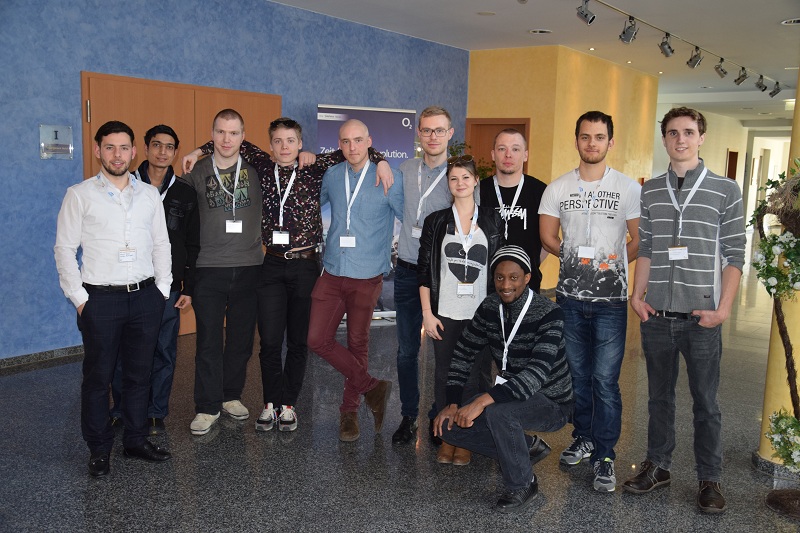 Tuesday started early. With the organization team in their University Alliances Tshirts, finishing the last touch ups at 7:00 am, InnoJam was about to officially begin. The bus carrying 108 merry students arrived at 8:00 am. The students stepped off onto the fair’s grounds to a sunny morning. Hanover held up its own when it came to weather this March, adding another high point to its reputation. After learning about their assigned teams and challenges, the students were led to their tables. Heike van Geel thoroughly explained the phases of the contest; each team was given one of the five different real-life challenges, mentored by an SAP Design Thinking coach and asked to come up with a developed app using SAP software by the end of the thirty-hour journey. During the competition, the groups would be reminded by a hard-to-miss clock on the stage, counting down the seconds to the end of each phase. One of such phases ended with a presentation by the groups of what they had developed by that time. Yards and yards of colorful yarn, hundreds of stationary items, balloons and sheets of paper were distributed among the students, aiding their creativity in the Design Thinking phase. 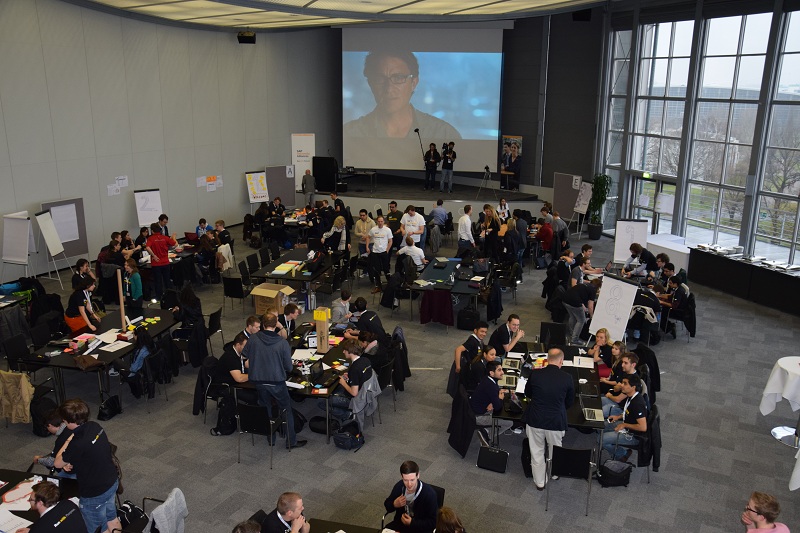 Ann Rosenberg kicked off the InnoJam by giving an enthusiastic welcome speech, acknowledging each and every participating country. Bernd Welz and Rolf Schuhmann took the stage next with Bernd introducing the student Entrepreneurship program. The students then wasted no time in diving into the Design Thinking stage, putting their creativity and innovative skills into good use while being guided and mentored by the SAP coaches. Within a few hours the room had changed face. Hundreds of colorful Post-its were plastered on the walls. Boards, banners and flannel charts gave subtle hints of what each team was up to. The excitement was overwhelming. Students between the ages of 17 and 39, many complete strangers to not only each other but also how SAP products operated, were now cooperating in teams, listening to one another and trusting each other’s ideas. With the only resting time being the one hour lunch break, students glided into the late afternoon only to be stopped by Heike’s bell ringing to mark the end of the Design Thinking phase and inviting team by team to the stage to give a presentation of their ideas. Twelve teams, now self-named, walked up to the stage and presented to the audience what they had come up with and what they were hoping to achieve . They received feedback from the customers sitting in the audience, giving them an idea of the areas they needed to work on in the remaining hours.

May the Coding Commence

Once the presentations were finished, the coding phase began. With some students pulling all-nighters, while others managed to catch an hour of sleep on the Fatboys, the apps were being developed, piece by piece. Sunrise hit the room’s windows and although the students didn’t have enough time to fully enjoy the view from the balcony, many pointed out that it was a unique experience; literally coding until the sun came up…

Four-hundred-and-fifty cans of Red Bull later, the clock hit 4 pm, and the countdown displayed 00:00:00. The students put their pens down, closed their laptops and awaited their team names to be called on stage for one last presentation in front of the jury, now comfortably seated on the Fatboys. 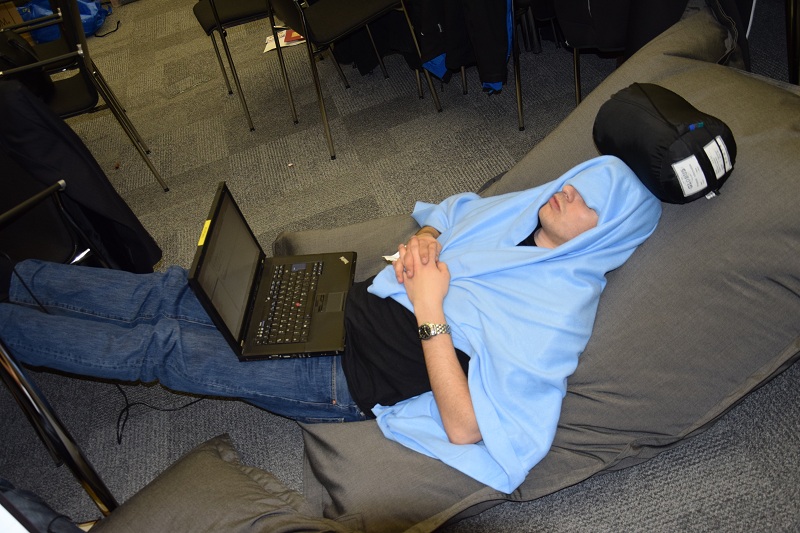 Two hours of presentations, questions and feedback and the students were done, but only until the next day. While the judges decided which teams made it to the top four, the students went back to the hostel to catch some sleep.

Thursday, 13th of March, was a finger-biting, nerve-racking day for the participants. Not knowing whether they would be presenting again as one of the top teams, this time on the SAP stage at CeBIT in hall 4, they maneuvered around the booths, taking in the CeBIT experience.

With the clock striking 3 pm, the SAP stage was packed with InnoJam participants, organization crew, judges and coaches, gathered one last time to watch, support and cheer. The top four teams, were announced one by one and presented their products. And after the host invited them all on stage, he announced the winning team; SmartA$$ Bankinators, a team developing a banking app for students having trouble keeping their finances straight and finding themselves in an under-budget situation.

Prizes- TShirts with “InnoJam Winner” printed on the front and back, Samsung Galaxy tablets and certificates- were handed out. But no one went home empty handed. As all participants are considered winners, everyone received a certificate announcing their active participation in the InnoJam 2014. And that was not all. SAP threw one big party at its booth later that evening, with international food, diverse music spun by a skillful female DJ, and drinks, once again proving that “There is No Party like an SAP Party”. 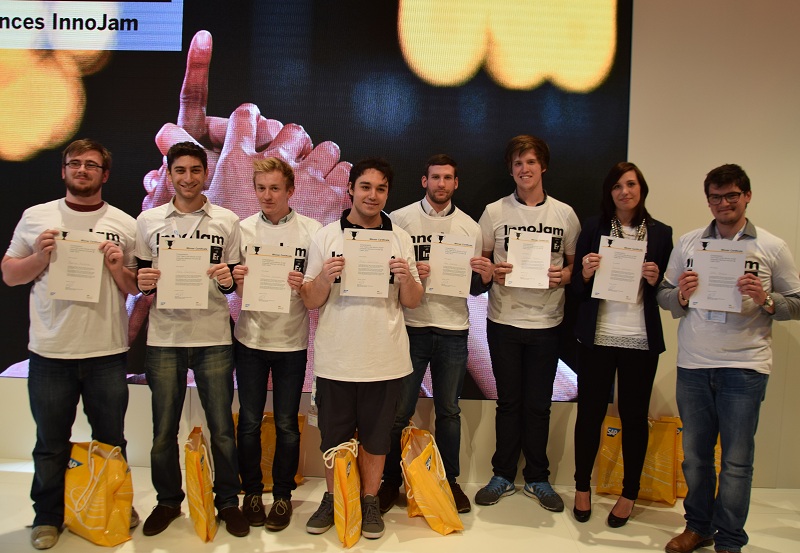