I wrote a popular original blog post back in 2008 describing the options for integrating third-party spell-checking functionality into the SAP CRM WebClient and the Interaction Center. In it, I mentioned that SAP does not deliver it’s own spell-check capabilities in SAP CRM, but that various options exist for integrating third-party client-side and server-side spell checkers; I also mentioned that most Web browsers were starting to include their own native spell-check capabilities.

Five years later the situation is much the same. SAP still does not offer it’s own native spell-checker in SAP CRM, and various options still exist for integrating third-party spell checkers. You can read about those options in the original 2008 blog post above.

One relatively new option for spell checking is to leverage Microsoft Internet Explorer 10 which includes it’s own native spell-check and auto-correct capabilities. Click here for more information and a demo. 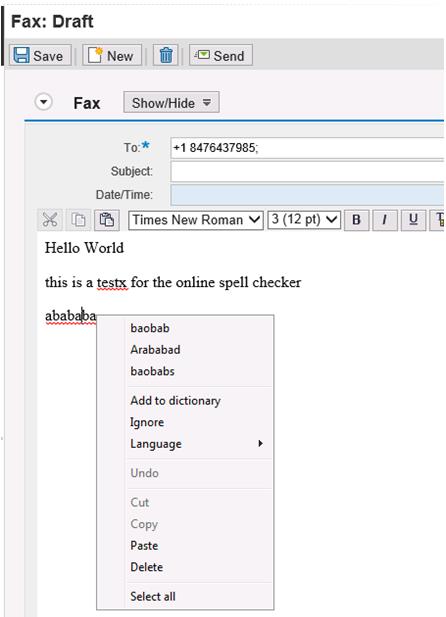 As seen in Figure 1 above, the native spell checker in MSIE10 works out of the box in SAP CRM. It is available in any form field in the CRM WebClient including the Interaction Center. It can be used in the E-Mail Editor as well as when sending faxes or SMS messages.

Some minor configuration settings are first required which can be found in the Internet Explorer menu options: Tools -> Manage Add-ons -> Spelling corrections. See Figure 2 below. You must ensure that the flag “enable spelling corrections” is checked. And you must select the appropriate language (which should ideally match the default language selected in your Internet Explorer settings under: Tools -> Internet options -> General -> Languages. 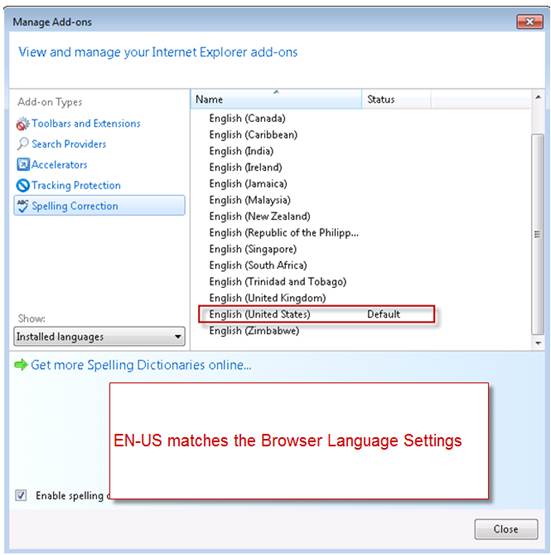 Using AJAX or other Web Service based spell checkers

Unfortunately, for various reasons, not everyone is able to use Microsoft Internet Explorer 10 or another browser that offers built-in native spell-check capabilities. For example, some companies may have an IT policy that mandates employees use an older version of Internet Explorer such as 9.0. In such cases, SAP offers another option for integrating third-party AJAX based spell-checking web services.

SAP Note 1773572 “Client-Side Checks for E-Mail in IC” describes how to call a third-party AJAX based spell-checker before saving or sending an email from the SAP CRM Interaction Center.

In principle any web service can be used to perform the spellchecking, such as this one from JavaScriptSpellCheck.com.

Thanks for this blog,indeed we have implemented this feature in our SAP CRM systems and it works out very well.

we loved the spellchecking. However after upgrading to EHP4 and the new RichTextEditor this feature is not longer working.

What is the solution for this?

Are you using the built-in browser spell check from Internet Explorer, or a third-party spell checker? Have you logged an OSS ticket to report that it is no longer working after the EHP4 upgrade?

we are using the integrated spellchecker from Internet Explorer / Windows. I tested with component CRM_THTMLB_COMP and it is still working for BTF - but not for RTE.

We opened OSS 207972 and received already the answer that SpellCheck is not provided by SAP with RTE.

This is very sad, because this was of great benefit for our users and now we don¨t have even a chance to bring back the old editor.

Hi Marcel
Did you figured out a way to use this ?
BR
NC

Hello John,
Could you pls confirm if the spell check from IE can still not be used within RTE for EHP4 ?
We are very keen to use this feature but not sure if it can be activated, without coding or do if we need to code to get this activated ?

IE 11 has no spell checker to enable, how does that work with SAP now?  I have several users that cannot spell check anything and it's not available to enable in IE 11 now