A Calculated Mess for $1 Billion Dollars

*Create your own analysis by downloading your copy of SAP Lumira and the RPI data set, or follow along on SAP Lumira Cloud*

March Madness can be a stressful time of the year for bracketology fans, even more so for those who (like me) happen to be data sleuths/geeks as well!  Everyone is getting in on the Warren Buffett billion dollar fun, from President Obama to Nate Silver.  Everyone wants a shot at $1 billion or so it seems.

A few key things that made the predictable completely unpredictable:

– Kentucky did not steamroll the regular season despite a top-rated recruiting class.

– The Shockers went are still undefeated after almost one calendar year.

– Kansas did not dominate.

This looks like a job for SAP Lumira.  Who’s going to survive and advance?

Loading the RPI data set into SAP Lumira, I filtered out all 68 teams by region: 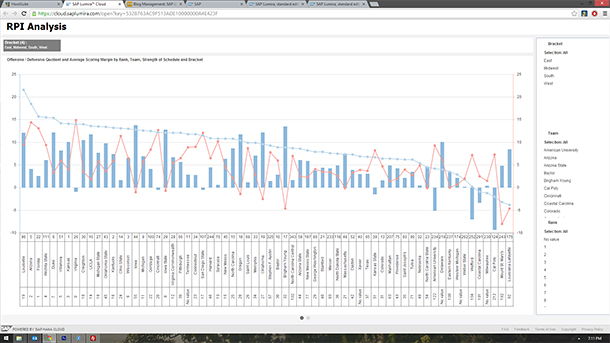 Similar to last year’s analysis, I want to compare each team’s performance against Strength of Schedule (SOS).  Last year, I weighed defense a tad strong; teams such as Syracuse and Indiana did not live up to expectations.

This year, I’m looking for balance.  I want picks with a high Adjusted Scoring Margin (ASM), and I want teams that demonstrate winning in different ways.

– Strength of Schedule (SOS) – A rating of strength of schedule. The rating is denominated in points above/below average, where zero is average.  This year’s SOS is ranked instead of measured.

– Adjusted Scoring Margin (ASM) – How much a team is supposed to win by.  Determines whether or not teams are winning (or losing) by the margins they are supposed to, given a set slate of opponents.

With formalities out of the way, let’s take a look at each bracket.

O Upsets, Where Art Thou?

Let’s start with the South bracket: 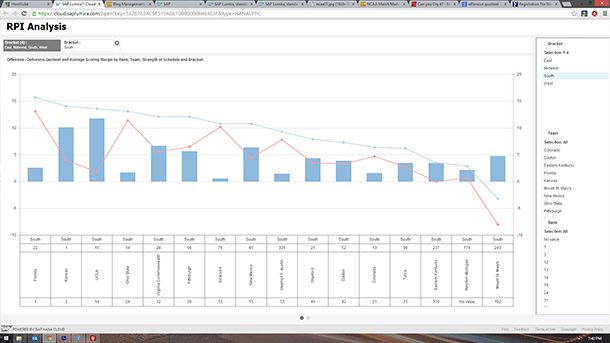 – Pittsburgh (9) over Colorado (8) – My first upset!  It’s hard to ignore the ASM differential even if Colorado played a much tougher schedule.  Pittsburgh played better all around.

– Ohio State (6) over Syracuse (3) – This one was a tough call.  I give the edge to Ohio State for playing a much tougher schedule.  Syrcause has been trending down since snapping their near-season long winning streak.  I think the Orangemen peaked early.

What’s happening over on the West bracket? 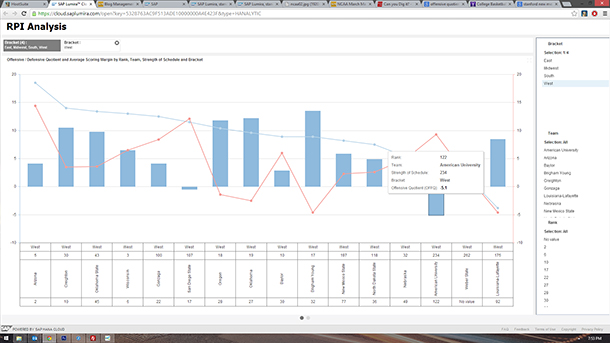 – Brigham Young (10) over Oregon (7) – Two teams who can score but can’t defend.  Two teams with comparable SOS.  I’m giving the upset edge to BYU for being the 3rd highest scoring team this season.

The Midwest bracket gets hilariously interesting.  I’ve never seen a bracket so stacked. 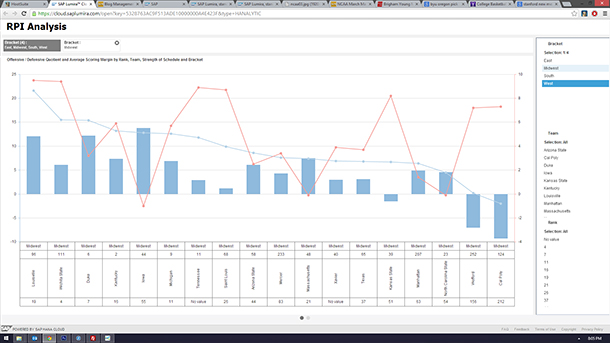 – Iowa/Tennessee(11) over UMass (6) – Tennessee played the 11th toughest schedule, and their defense outperformed by a ridiculous (almost) 9 points.  I don’t know how UMass got their ranking.  Tennessee should beat Iowa, but either team should beat UMass.

– Arizona State (10) over Texas (7) – I’m making this pick for balance reasons.  The Sun Devils played a tougher schedule, and they’re demonstrating an adequate ability to score and defend.  Texas can defend, but their offensive quotient is low.

– Kentucky (8) over Wichita State (1) – Can I even call this an upset?  The Shockers’ DEFQ and ASM scores are misleading given their schedule weakness.  Kentucky played the second toughest schedule this year, and the ASM differential between the two teams is just 2 points.

Last but not least, the East bracket: 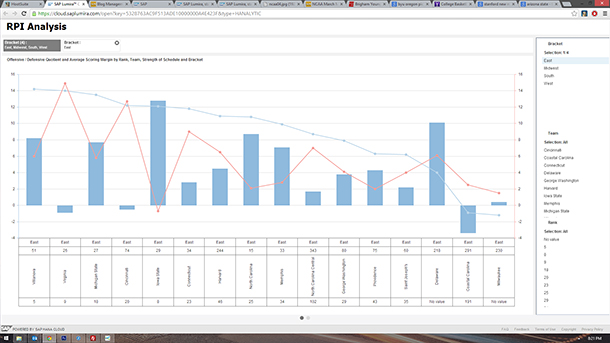 – Harvard (12) over Cincinnati (5) – This one seems to be a really popular upset pick.  I like it for balance reasons.  The Bearcats struggle to score, and their ASM differentials are barely over a point.  Harvard, if you remember, upset New Mexico last year.

So who do I like going into Final Four? 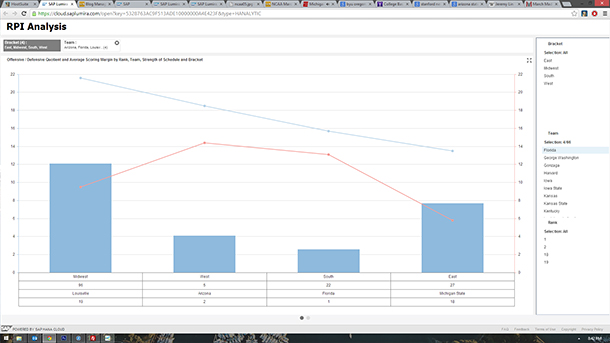 Let’s not kid ourselves.  Louisville is a 1 seed playing as a 4 seed.  They’ll beat Michigan State.  Florida versus Arizona is a toss-up, but I’ll give the edge to the Gators for riding a 28 game winning streak, going unbeaten in their conference, and willing their conference tournament.  It’s the same reason I’m picking them as the national champions.

What do you think of these picks?  Would you do anything different?

Using SAP Lumira, I was able to quantify (and justify) a number of my upset picks.  Hopefully, this year’s balanced approach will put me in the 90th percentile of bracket pics.

What sorts of stories would you tell with SAP Lumira?  Reply below and show us!

Here is my cloud with KU (in green) vs. Eastern Kentucky (blue)

I can't get the legend to show up on Cloud Lumira 🙁

I like the Jayhawk background you threw in there!  Stats are calling it for Eastern Kentucky?  We all know that won't happen 🙂 .

Interesting that the Eastern Kentucky coach said KU had the third highest RPI in the tournament, even without Embiid

I guess I need to look at KU/Stanford stats next.

Fingers crossed that tomorrow's game is easier for the Kansas Jayhawks:

I'd be really surprised if Kansas lost.  Might be close to start but they should pull away.  I think you get Embiid back after this game too.