What everyone in HR (or anywhere) should know about FIORI

I just attended the SAPinsider HR 2014 conference in Orlando, Florida last week, and one of the many things I noticed (and am blogging! haha) was the apparent misunderstanding, misconception or lack of knowledge of exactly what is this thing SAP calls “Fiori”. For SAP customers, this, of course, is by no fault of their own. It is yet another shining example of a SAP “rush to market” misstep where they announce some grand thing and a few months later it becomes a bigger thing…including what they originally announced…which all gets completely lost in the message. For example, remember when HANA was announced? It was THE super fast “in-memory computing database”….”the database in memory”….”database without the database”….”database database database”. But then, a short while later, HANA becomes the HANA platform which yes , includes the “fast in-memory database”, but also soooooo much more. But ask most people what HANA is even still and all you hear is “that fast database thing”. That is all they remember it as. ARRGGGGG!!!! Well, the same thing has happened with SAP Fiori.

What Fiori first was

Initially, Fiori was merely a collection of apps provided by SAP. Think of it like a small “app store” that SAP built for you. They were just a bunch of pre-built apps, you buy a license for Fiori and you get them all…to use or not use as you see fit. One key factor is that they can run anywhere on any device. You probably saw this image a good bit that illustrates that point… 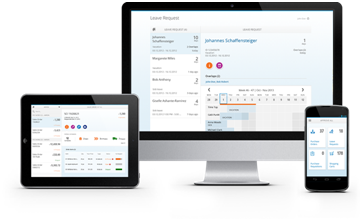 The first wave of Fiori apps offered about 25 of the most popular business applications.

You may have seen screenshots showing the “landing page” with many app “tiles” and then app details pages (ex. Travel Requests). 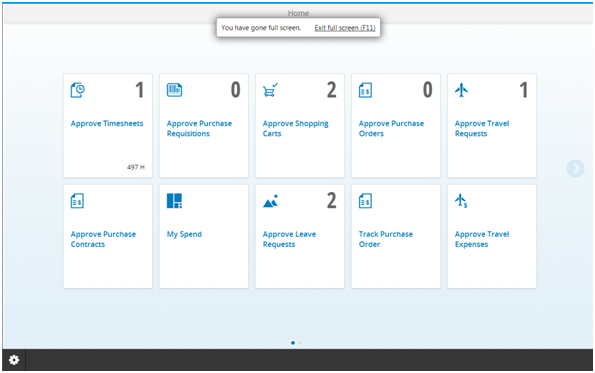 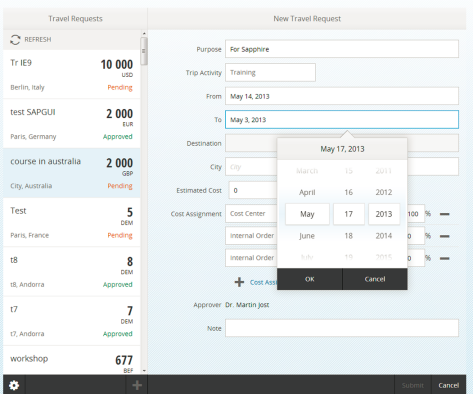 The second wave extended this to about 190+ pre-built apps. But around that time things changed a bit…

What Fiori is now

SAP announced that Fiori would be opened up to custom development by giving developers clear guidelines of “what” constitutes a Fiori app based on SAPUI5 (SAP’s own HTML5 “flavor” with an open source version, OpenUI5, now available), but more importantly, SAP adopted Fiori as the new SAP user experience (UX) model going forward for it’s overall “New-Renew-Enable” UX strategy (plenty of TechEd 2013 material you can find on this!). Per SAP material…

This “Fiori Experience” (queue the Jimi Hendrix now! haha) is all about these fundamentals:

To me, the one harped on most at TechEd 2013 in Las Vegas was the “1-1-3” mantra…one user role, one use case, and no more than 3 pages/depth to accomplish a task. In most cases, I can see it working. However, it seems fairly simplified for those SAP users who are accustomed to some of the deeper, more complex transactions. We will see if this strict rule holds true or the “exceptions” start to multiply.

The biggest thing to now think of with Fiori (yes, this is what Fiori is NOW as opposed to when it was first announced) is that it is a key piece in how Dr. Vishal Sikka’s envisions his “simplification without disruption” idea. In his keynote at SAP TechEd2013 in Las Vegas, he drew up on the screen the state of most customers’ landscapes full of a disparate pieces…

Then, he walked through how the underpinning of those systems could/would move to HANA and eventually the HANA cloud platform on the backend while the frontend user experience (the good ol’ “UX” acronym) would be consolidated under the consistent Fiori UX paradigm. 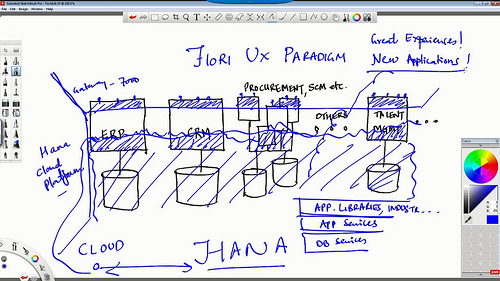 The thought is that new applications and innovations will then be faster and easier to create via the middle layer of extensive libraries, app services and database services. Seeing as this is Dr. Vishal Sikka who drew Fiori into this as a key component which might as well be coming from the hand of God in the SAP world, then I can pretty reliably state that Fiori is a pretty big future direction for SAP and not going away anytime soon (though likely renamed to something else to confuse us all by the marketing department just to keep us all on our toes as usual. haha)

Hope this helps my HR (and non-HR) friends out there and clears up your confusions/questions around Fiori. Feel free to add your list of confusing SAP marketing missteps below in the comments (haha). Till next time…

03/18/2014 EDIT: Although I was hesitant and did not want to mention it as it really is outside the discussion of “what” Fiori is, Jarret Pazahanick convinced me that I need to mention the current licensing issue (maybe he *might* have mentioned sending his friends “Lefty” and “Knuckles” to my house to have a little discussion with me about the effectiveness of knee caps and how they are good to keep on your body.  haha). Anyways, one pain point for customers is that currently Fiori requires a $150 PER USER license (it used to also require a Gateway license, but that at least went away). The problem there is that you are paying for ALL of the apps. So what if you want just the HR ones (about 7 or so) and of that, you need only 3-4? You still pay the $150/user. Now….will that change? In my opinion, yes! The fact that this is SAP’s future direction would tell me it is likely so. But then, they might just do this for that “app bundle” while opening up the rest. If they are “pay-to-use”, then maybe the “bundle” will be broken up to a “per app” pricing or something more reasonable for customers. Meanwhile, I *know* there is a push for Fiori to just be made free for SAP customers all together (much like SAPUI5 was offered as the open source OpenUI5 for free!). John Appleby wrote a good article about this over on Diginomica.com and coined the term “FreeOri” (haha). Maybe Dr. Vishal Sikka will announces something at this year’s SAPphire around that.Fingers crossed! 🙂

Good question. 😆 I believe a lot of the Fiori "look" was built with SF in mind to some degree. Looking at Vishal's BEAUTIFUL ARTISTIC VISION (yes, Vishal, I am available for a high paying position. haha) that he created, you can see how SF could fit into that "disparate landscape" with Fiori UX over the top (especially with SF on the HANA cloud platform). Furthermore, nothing I have seen says that Fiori apps can't have a bit of "flair" to them as opposed to the toned down themes we see in demos so far. SF already has a lot of "pretty" pages, is mobile ready, and kinda does fit the 1-1-3 mantra. I think it is closer in many ways than you might think. But there is work to be done of course. Now will this happen over night? Well.....that I can't really speculate on...I mean I could....but speculation is just that...but wait, they built 24 hour news channels that generate millions of dollars based on about 23.5 hours of pure speculation presented as "news".....maybe I can speculate. haha No, seriously, I too am waiting to see. As I am more on the dev (and especially UI) side of things, I remember when CRM's PCUI was touted as the next big thing for ALL of SAP while at the same time WebDynpro Java was gaining ground. We see who won that battle....NEITHER! haha

'Hand of God'? all it reminds me of is that (in)famous goal from Diego Maradona.. excellent style of writing.. as always..

Thanks. I try to keep it interesting. 😛

I didn't know Chris -> valuable info for me 🙂 thanks Otto

Thanks, Otto. Providing "valuable info" is a key for Mentors.....right Mark Finnern? haha 😉

I am also hopeful for a "surprise" Vishal Sikka announcement around Fiori pricing at Sapphire as well.

On a side note SAP Mentor John Appleby wrote a great blog on this topic last month.

Yep...mentioned John's article up there. 😉

The mobile app is provided as part of your SuccessFactors subscription.

That being said - I would not be surprised if we took a SAP Fiori approach, particularly with the benefits of SAPUI5 structuring on different device formats.

Great summary Chris. It will be interesting to see what happens with the pricing over the coming months and whether Fiori becoming Freeori will affect adoption.

I used to see images of Fiori in the sidebar of SCN and other SAP websites, but would not dare to click it, with the fear of opening a pandora's box 😀 and entering the world of the unknown. So Thank you for throwing some light in there.

Also you said "SAP announced that Fiori would be opened up to custom development by giving developers clear guidelines of "what" constitutes a Fiori app".

Any idea where we can find these guidelines and if other developers will be able to add their custom developed apps in this offering. ( I am trying to see if I my SAPPY BIRD app will qualify as a Fiori app ). 😉