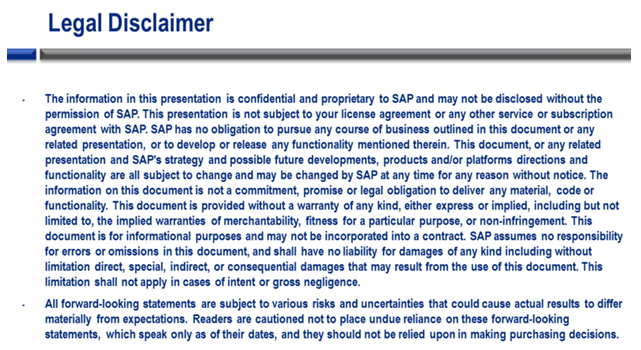 Things in the future are subject to change. 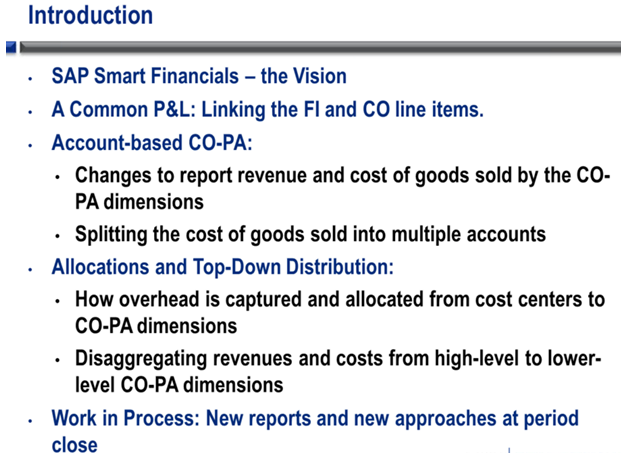 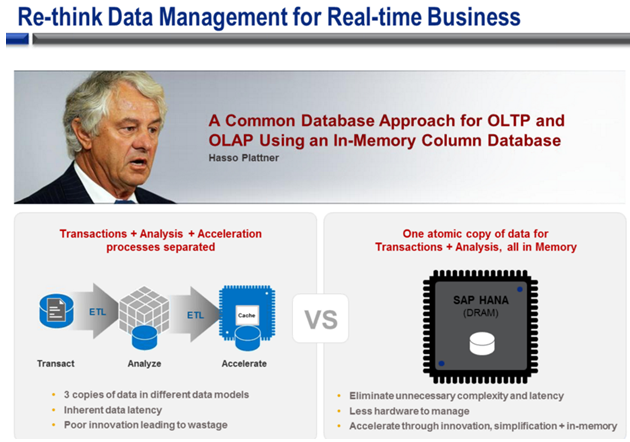 Figure 3 shows the original designs started in R2 – transact, record, in a financial document and then report on it

SAP had a separate ledger for COGS, CO reporting PS reporting – separate tables in the system

The vision was to report on raw data.

Then SAP moved information to Business Warehouse, but for some customers it takes 8 hours to move from Material Ledger to BW 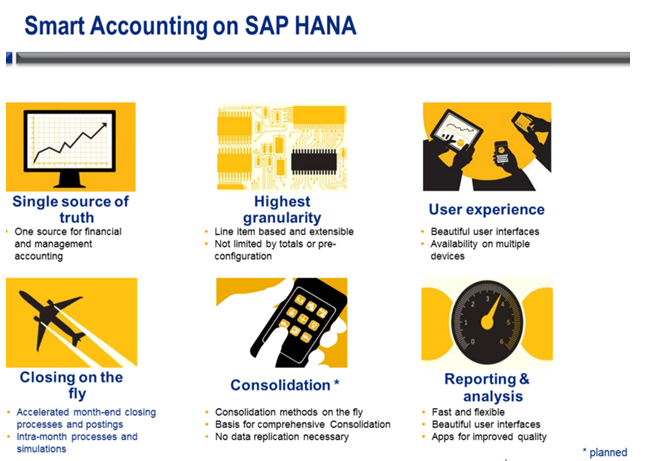 Figure 4 shows “one data stream, granularity” with a “nicer user experience” and you can “close on the fly”.

The future vision is consolidation on the fly 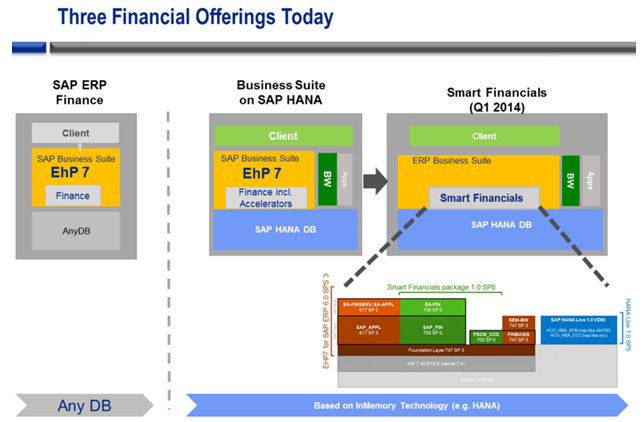 Janet said that “speed coming back is radically fast”.

Smart Financials assumes HANA underneath with a code split of two blocks: SAP-FIN and ERP-FIN

She said this is leaner, like “putting data on the fly” 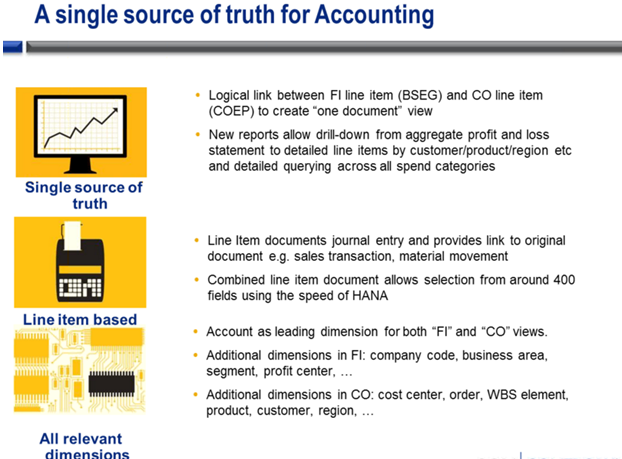 It uses HANA Live to drill down 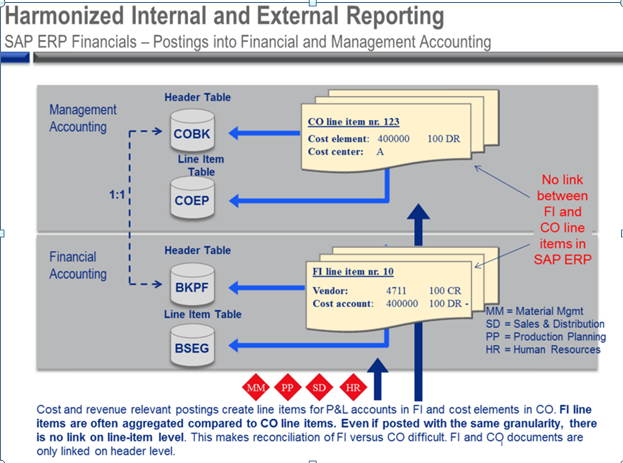 Figure 7 should look familiar to everyone who has taken an Intro to SAP Accounting Course (including me).  You can see there is no link between the FI and CO items. 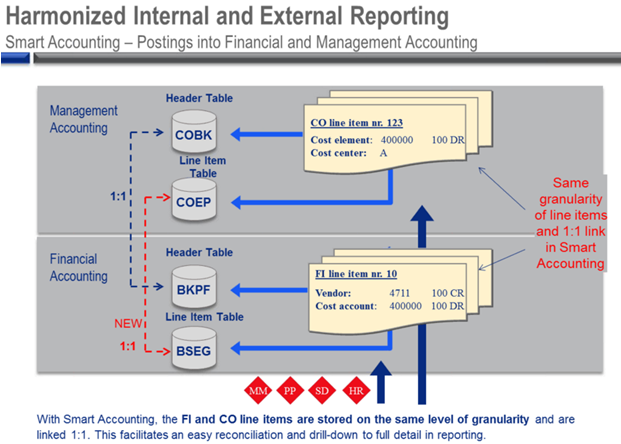 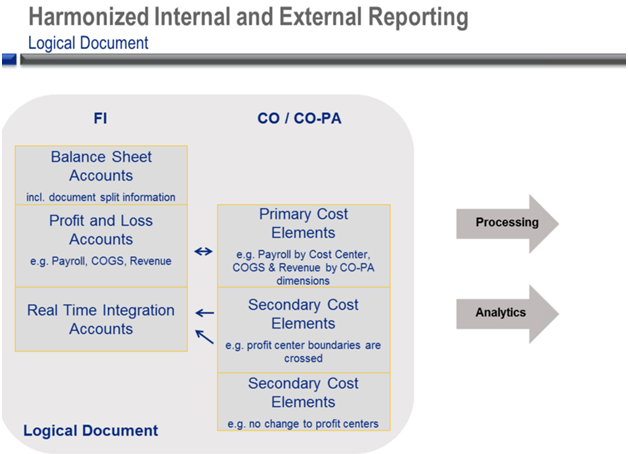 Smart accounting is based on new general ledger

Part 2 is coming, where using the BI tools against the Smart Financials solution is shown, including Analysis Office.

Please note that SAP’s Vishal Sikka discusses BSEG and how we use it in this new Open SAP Course Course: An Introduction to SAP HANA by Dr. Vishal Sikka

is there a place where we can testdrive the Smart Accounting. ie COEP==BSEG?

I'm very curious to see it myself; 15 years of FI-CO knowledge is about to change.  Many of these screen shots reminded me of my first SAP Accounting class in Calgary in 199x...

Perhaps once it is GA we will be able to see it.

you are right.  Wrote so many ABAP codes against the secondary index tables BSIS....now they are history...will be....

it appears SAP is keeping them as views to allow smooth transition of custom codes....

thanks for these insights. I find it incredibly hard to find useful Information on smart financials that go down to this operational Level.

I kind of understand that BSEG and COEP can be merged and i see the benefits from this.

Maybe i just dont see the whole Picture here and you have some insights?

Hello Kai - unfortunately I have no other details on this.  I know the product is in ramp-up (and I am not a part of this ramp-up)

Are you attending ASUG Annual Conference / SAPPHIRE?  There is a session on this, 1507  - see http://sessioncatalog.sapevents.com/go/agendabuilder.sessions/?l=80&sid=14464_40055&locale=en_US

Another option is to contact the SAP speaker directly with this question.

i don't mean to steal the thread from Tammy, but in the spirit of an open forum i would like to leave this comment.

i'm not in the ramp-up either, but IMHO, the main benefit comes from the underlying (smart) architecture of the FI/CO on HANA, i.e. dispensing with persistent subtotals and totals (or cost-based COPA in your case). if i understand anything about the columnar databases, that have their field values encoded and compressed, i don't see a need to reconcile any more as the discrepancies are assumed as non-existent.

now, the experience tells us otherwise, so i'm just as curious as anyone else how SAP is going to pull this off.