With SL Toolset 1.0 SP11 or higher the nZDM 1.0 for SAP NetWeaver Java is available for download. We support the SAP Process Orchestration, SAP Business Process Management (SAP BPM), SAP Enterprise Portal, SAP Manufacturing Integration and Intelligence (SAP MII) and ensure a very low downtime for the required maintenance activities.  In case your SAP PO is downtime critical, the nZDM for Java will support your regular maintenance activities in the best way. When you need to implement the newest SP and your inbound messages are mandatory for your e-commerce business or the messages are internally mandatory for your production and you can only stop this for minutes you will be the one we address with nZDM Java.

Which maintenance activities are supported?

The SAP maintenance activities that we support with nZDM Java to have almost no business downtime anymore are:

The nZDM Java supports the following approaches for SAP PO:

Both approaches rely on the copy or clone of your productive SAP PO system/ DB. All maintenance activities should be performed on the copied system (clone system) while the production system is still running on the production version. The nZDM Java is independent from the clone software which is used. However, the SAP Landscape Management (LaMa) Enterprise Edition or the Software Provisioning Manager (SWPM) 1.0 supports the procedure step. LaMa even works with nZDM for Java in a closer, process integrated way.

The graphic below illustrates the process and both approaches, system switch or database switch, of nZDM Java: 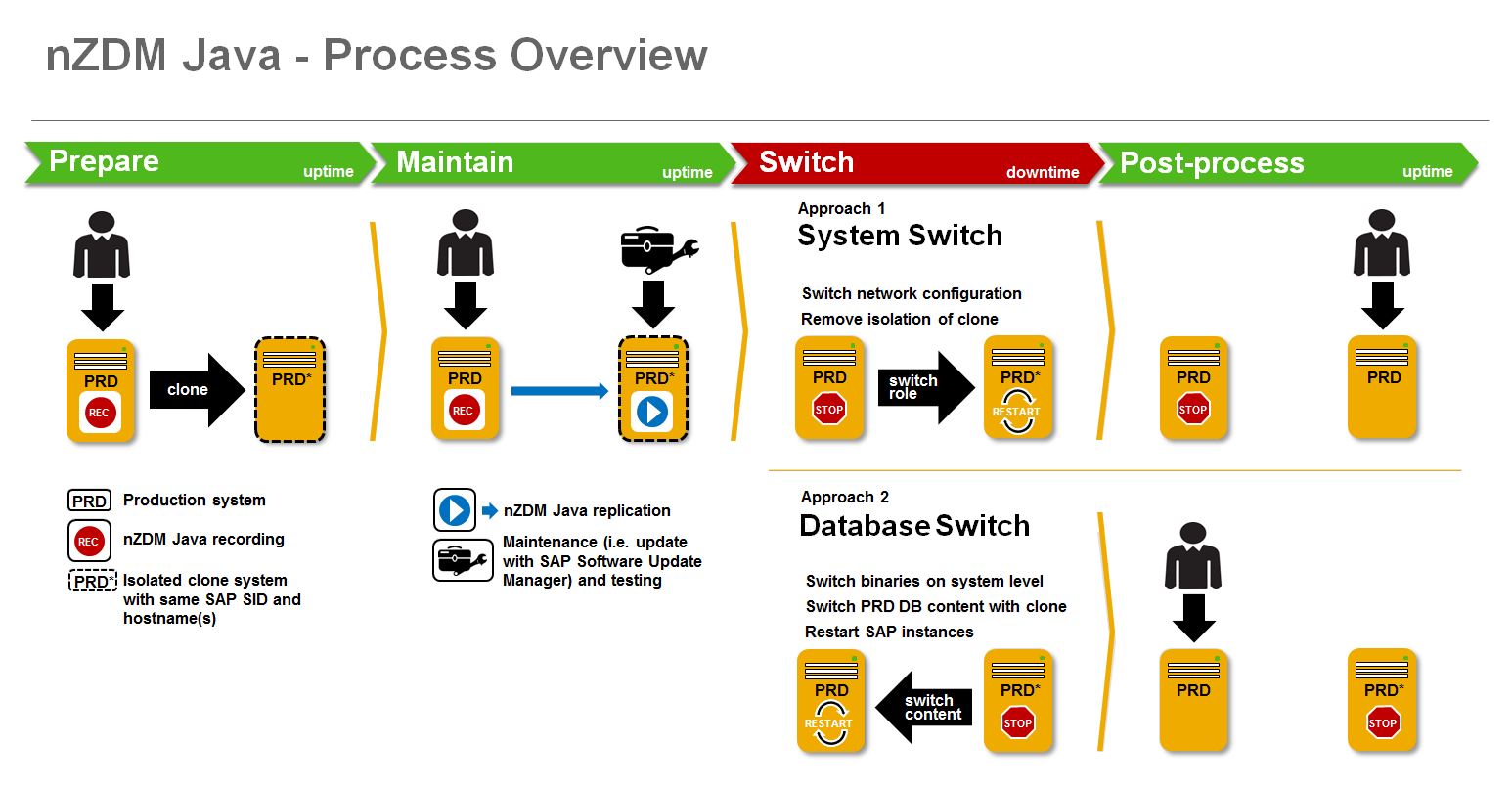 For both approaches you have basic steps to enable business downtime minimization during planned maintenance activities in the SAP PO system.

How is the consistency between the productive SAP PO system and the updated clone system ensured?

The record and replicate functionality of the tool ensures consistency and reliability:

A classification selects the tables which are relevant for the record and replication. These tables are supplied by the DB trigger and so changes are automatically recorded. The SAP Process Orchestration runs the usual business. Restrictions are mainly around development activities, repository changes or SLD updates.

For the SAP PO use case the recording of the DB changes are created in the Database directly. This ensures a high performance. With the record and replication technology which is used for the PO the memory footprint, performance and scalability is tested intensively. A slightly reduced to normal business can be assured so far.
So the process / user can nearly work as usual while the clone system is updated. The status and workload is reliable, visibility on a control monitor of the nZDM Java is part of the functionality:

Which SAP PO releases are supported?

Currently, the nZDM java supports the SAP PO on the most common databases:

nZDM Java was used for updates of BPM, PO, EP and AEX landscapes. Our customers used it for testing purposes and also for productive updates. A productive update for a AEX when using the system switch approached could be managed in ca. 15 minutes. The procedure was supported by SAP LaMa.

The DB switch approached could be managed in a productive update within 90 minutes. The update was managed in an HA scenario.

What is needed to download and use nZDM for SAP NetWeaver Java?

The nZDM for SAP NetWeaver Java is part of the SL Toolset 1.0 and can be downloaded from the SAP Service Market Place at http://support.sap.com/swdc

SAP nZDM Java is general available and no additional license fee is needed.