Are you there, SAP? It’s me, Jelena

At first I thought about writing a huge rant, Kanye West style, along the lines of ‘SAP doesn’t care about their customers!’. But since that didn’t work out very well for Kanye (although he seems to do well now), I decided to take a bit different approach.

There is an old joke in Russian that I’ll make my best effort to translate to English. A guy is at a racing track, looking to place a bet. A very old horse, missing almost all her teeth, approaches him and says: ‘Shon, pleashe bet on me, I promishe I won’t let you down’. The guy thinks ‘well, OK’ and bets on that horse. The horse runs fast at first but then finishes last in the race. Angrily the guy tells her: ‘Hey, what the heck happened, you promised you wouldn’t let me down!’. The horse replies: ‘Well, shorry, I couldn’t make it…’.

For some reason I thought of this joke while reading the SAP note 754333. In a nutshell, the note informs us that out of the two available address fields only one is populated for the incoming EDI orders. What is the reason for that and what is the solution or workaround? Well, the note does not say. Under ‘Solution’ it just makes this sort of “shorry, couldn’t make it” statement. So I imagine this dialogue could have taken place many years ago at the SAP headquarters.

Some Top SAP Banana (STSB): – Mmm, lunch was good … Arrrhem… OK, back to business. Johnson! (* not his real name)
Johnson (J): – Yes, sir!
STSB: – How is that ee-dee, ee-dee, whasshisname, E-D-I project is coming along?
J: – Quite nicely, sir! I have excellent news – we found a way to reduce development effort by the whole hour by omitting some irrelevant fields. Really minor things, sir. For example, when receiving sales orders from the customers we will not accept the second address line.
STSB: – Good thinking, Johnson! Who needs that anyway? Surely we’re not going to sell to some riff-raff that can’t afford the whole building, er? Shouldn’t even need a street address at all! Just ‘SAP, Waldorf, Germany’ should be enough, er? Get yourself a city, losers! Bwa-ha-ha-ha!
J: – Ha-ha-ha, sir, indeed-indeed… We could save another hour by eliminating the field altogether, but our sources tell us that it would still be needed if we send a purchase order to some of those, you know, [looks around then whispers] minority vendors, to take advantage of some tax benefits, sir.
STSB: – Ah, yes, that thing… Yes…
The voice of reason: – Sir, but what if our customers do need to have two address lines in a sales order?
J: [beaming] – We thought about it! We will charge the customers for maintenance and then we’ll write an OSS note saying that it is our design and they need consulting. Then we will charge them for consulting.
STSB: – Good call, Johnson! I like this guy!

Certainly just one little SAP note couldn’t have sparked this blog. Oh no, this was actually just the last straw. Before that there was also 635337 (missing net value segment in the IDoc – apparently someone didn’t get a memo that 0 and null are two different things) and 134019 (making phantom assemblies to explode in a planned order is “too difficult”) and everyone’s favorite 550726 (BAPIs don’t work the same way as transaction). And should I mention the country-specific notes, for example 896677 that delivers an official form for Mexico that can’t be uploaded without installing German language and has missing texts? “Shorry, couldn’t make it”…

I could go on with this list for long time and if you have worked with any module for over a year I’m pretty sure you also could name a few of such “solutions” in your area of expertise.

Don’t get me wrong – I don’t hate SAP. Their software allows me to provide for my family and its shortcomings actually create more job security for me, as an ABAPer (although I would kind of prefer to work on something more creative than patching a result of someone’s bad decision in a user exit). I also understand very well that no software is perfect. But I’m very concerned that for the company that wants to remain a major player in the ERP market the “shorry, couldn’t make it” very soon is not going to be good enough. That’s why I’m offering some very specific suggestions to SAP below, completely free of charge (just like everything else on SCN).

Case in point – note 754333 above. The field is there but no data goes in it. Seriously, does it make any sense to anyone?

And how would you like if, say, a Windows API for saving a file would’ve worked only 80% of the time? Then why it’s acceptable for a BAPI to do that?

And why can’t we do SELECT-OPTIONS … FOR MARA-MATNR? (Paul Hardy knows what I’m talking about.) Listen to that Voice of Reason person!

Communism was The Design for over 70 years, how did that work out? If it became necessary to issue a “shorry, couldn’t make it” note, I guess it’s safe to assume that quite a few customers contacted SAP about this. Didn’t it occur to someone at some point – “so many customers are upset about this, why don’t we just fix it?”.

Start listening to your customers. Yes, all of them

When we first ran into the issue with missing segment (note 635337), I’ve sent a message to SAP in naive hope to provide a business case and persuade to correct this instead of covering up with the note. The nice Global Support person replied (rather smugly if I may say) that I should submit an enhancement request through ASUG. OK, I can totally do that, I thought. So I went to the ASUG web site (it always pretends we have not been introduced and asks me to login again every visit, but that’s OK, no hard feelings) and it actually has ‘Influence SAP’ link right there on the home page. How thoughtful! And what do we have here? Executive Exchange? Oooh, I do wonder what is exchanged there for what but it’s obviously not what I need. Influence Councils? ‘Roadmap, blah-blah-blah’, not me either. SAP Customer Engagement Initiative? ‘SAP lead focus group’ – heck no. ‘Early adoption’ – again not me. SAP Customer Connection? ‘Smaller improvement requests’ – sounds like what I’d need. But dig this: one link leads to a YouTube video ‘How to Get Your Voice Heard by SAP’ (apparently first we need to listen to the SAP’s voice) and the other to ‘SAP Improvement Finder’. Key word being “finder”, not a “suggestor” as this is just some strange search site. Hmm… After clicking on the links for good 20 minutes I’m starting to suspect it was the Global Support’s polite way of showing me the middle finger. Is it just me or does this level of customer service seem to be more befitting a drug cartel or a cable company?

One might say ‘But Ms. Jelena, SAP has so many customers! If we just open the floodgates to all of their complaints then our support will be paralyzed!’. Well, dear SAP, allow me to present the exhibit A: 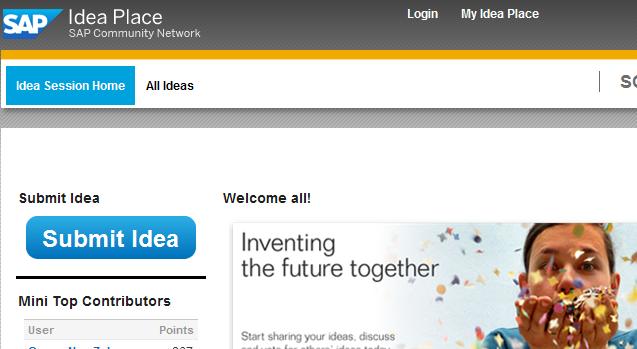 The SCN Idea Place. Ta-dah! There are likely almost as many SCN members as S-users out there, yet the SCN team with far fewer resources was not afraid of “opening the floodgates” for every SCN member regardless of their SAP user group affiliation. Why did they do that? Hmm, maybe because they give a damn?

Put it to use and allow all SAP customers submit ideas for any modules, not just some pet projects carefully pre-selected by SAP. At least that’s what I would do if I was truly interested in my customers’ opinion instead of just pretending. In this day and age do we really need a “customer engagement committee” just to be heard?

Hey, my eyes are up here. Maybe, just maybe can SAP stop trying to be everything to everyone and get at least one thing done perfectly right? Don’t even need to be a major one. For example, how about you deliver standard Smart Forms for every output document? Or Adobe Forms. Doesn’t really matter just as long as it’s consistently available in every module. Think about it.

On a related note – when Microsoft buys other software sometimes they add it for free to their standard Windows distribution package. How about SAP throws in a freebie once in a while, eh? Giving your customers a lousy standard GUI and then charging extra for Personas – nice touch!

I want to be excited about the new things SAP has to offer. But what I keep hearing from the business is that SAP solutions are bulky, expensive, not user-friendly, difficult to maintain. I keep hearing “we spent bazillion of dollars on this software, why can’t it do X?” (X being, for example, filling in the customer’s address correctly in an EDI order). And, quite frankly, sometimes I don’t know what to answer.

So, dear SAP, let me end with another joke. “What does SAP stand for? – Shut up And Pay”. Come to think of it, it’s not really funny. But, sadly, so far it’s kind of true.

P.S. Since I’ve already warmed up on this, one last request, dear SAP: stop renaming stuff! Try hearing “that BW or BI or whatever that thing is called now” every day. Word is still Word, Excel is still Excel. But SAP gets a renaming itch every other year. Even I have to go on Wikipedia to check what the heck the name de jour is. Just pick a name and stick to it for cripes sake.